At a time when everything seems mapped, measured, and understood, this river challenges what we think we know. It has forced me to question the line between known and unknown, ancient and modern, scientific and spiritual. It is a reminder that there are still great wonders to be discovered. We find them not just in the black void of the unknown but in the white noise of everyday life — in the things we barely notice, the things we almost forget, even in a detail of a story. The Boiling River: Adventure and Discovery in the Amazon

by Andrés Ruzo
In this exciting adventure mixed with amazing scientific discovery, a young, exuberant explorer and geoscientist, journeys deep into the Amazon—where rivers boil and legends come to life. 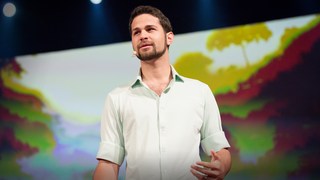 The boiling river of the Amazon

Download with iBooks for your Mac or iOS device When Andrés Ruzo was just a small boy in Peru, his grandfather told him the story of a mysterious legend: There is a river, deep in the Amazon, which boils as if a fire burns below it. Twelve years later, Ruzo — now a geoscientist — hears his aunt mention that she herself had visited this strange river.

Determined to discover if the boiling river is real, Ruzo sets out on a journey deep into the Amazon. What he finds astounds him: In this long, wide, and winding river, the waters run so hot that locals brew tea in them; small animals that fall in are instantly cooked. As he studies the river, Ruzo faces challenges more complex than he had ever imaged.

The Boiling River follows this young explorer as he navigates a tangle of competing interests — local shamans, illegal cattle farmers and loggers, and oil companies. This true account reads like a modern-day adventure, complete with extraordinary characters, captivating plot twists, and jaw-dropping details — including stunning photographs and a never-before-published account of this incredible natural wonder. Ultimately, though, The Boiling River is about a man trying to understand the moral obligation that comes with scientific discovery — to protect a sacred site from misuse, neglect, and even from his own discovery.

Read an illuminating interview with the author on Gizmodo : "Scientists Discover a Boiling River of Amazonian Legend"

Andrés Ruzo's interview with IFL Science : "There’s A River Of Boiling Water In The Amazon Rainforest"

On Huffington Post Science : "This Incredible 'Boiling River' is a Scientific Enigma"

Andrés Ruzo grew up in the United States, Nicaragua, and Peru. Besides giving him a bit of a national identity crisis, his background helped him see that the world’s problems are not confined by borders, but rather share a common root in energy and resources. This realization inspired him to become a geothermal scientist: obtaining degrees in Geology and Finance at Southern Methodist University, where he is currently finishing his PhD in Geophysics. He believes that environmental responsibility and economic prosperity can go hand in hand, and uses science to unite both aims. He is a National Geographic Explorer, an avid science communicator, and a passionate developer of educational content.