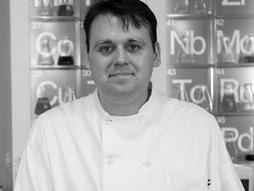 You could call Homaro Cantu a chef -- or an inventor of futuristic food delivery systems. A graduate of Le Cordon Bleu in Portland, Oregon, he worked in Charlie Trotter’s restaurant in Chicago, where he rose to the position of sous chef, then left to found Moto, a path-breaking restaurant with a molecular gastronomy approach. Moto puts Cantu’s concepts and creations into practice by melding food with science, technology and art. Michael Eisner once described Cantu as the most revolutionary person in food since Ray Kroc.

Through his company Cantu Designs, Chef Cantu filed numerous patent applications covering dining implements, cookware, printed food and hoped to develop his inventions for commercial, humanitarian and aerospace applications. In 2013 he released The Miracle Berry Diet Cookbook to imagine uses for the flavor-tripping "miracle fruit." As he said: "Any idea's a great idea as long as it tastes great." Cantu passed away in April 2015.

“But while Cantu is most certainly a chef, he is also someone whose approach to innovation has relevance far beyond the kitchen. He is the classic mad scientist, a Stephen Hawking acolyte with a basement filled with gadgets, robots, and gazillions of inventions aching for just a little bit more time and attention. And despite the accolades, in his mind he is just getting started. "This isn't just gimmicky s--t," he says. "There is a point to this."” — Jennifer Reingold, Fast Company 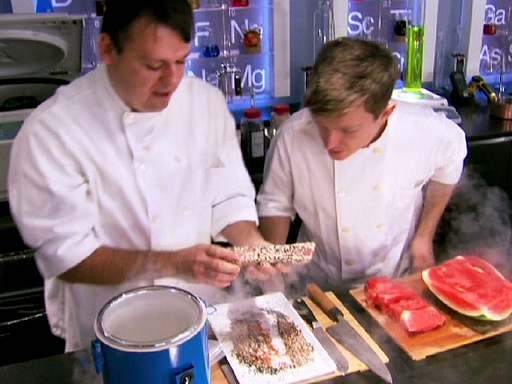 [ted id=1304] At TED2011, chefs Homaro Cantu and Ben Roche of the Chicago restaurant Moto showed us the unique alchemy that kept diners in their restaurant chuckling as they ate: “champagne” grapes, maki rolls printed on paper, a Cuban cigar that tastes like a Cuban sandwich, nachos that are actually dessert. Bouncing with enthusiasm, Cantu […]

Goodbye to sugar? Homaro Cantu on how to trick your taste buds

Homaro Cantu and Ben Roche can only be described as the mad scientists of food. These two pioneer unique food delivery systems — think maki rolls printed on flavored paper, a dessert disguised as nachos  and a bleeding veggie burger — at their Chicago restaurants, Moto and iNG. At TED 2011, the pair spoke about […]