Theme: Innovation in Science and Humanities 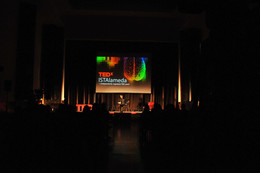 Because Portugal really needs good ideas, because is important to foster hope in a community that has been devastated by the crisis and the apparent lack of a future for the youth, it is urgent a new attitude towards the future – Portugal has no time to lose.
Science, technology, education and social responsibility are not the sole answers but they sure are the way.
TEDx Alameda joins TED movement to change the world by contributing good examples of what our youth is thinking and doing in Portugal. With new ideas, with ideas that can change our country, with ideas worth spreading.

Amy R. Pritchett is the director of the Cognitive Engineering Center, which seeks to expand research and education in cognitive engineering within the College of Engineering. She joined the Guggenheim School of Aerospace Engineering faculty at the Georgia Institute of Technology in 1997, where she holds a joint appointment in the School of Industrial and Systems Engineering. In 2002, Pritchett was also a Senior Technical Fellow of Technische Universiteit Delft in The Netherlands. In 2008-2009, Pritchett served via an Intergovernmental Personnel Agreement (IPA) as Director of NASA’s Aviation Safety Program. She has served in numerous other leadership roles, including as technical program chair and program committee member for the Annual Meeting of the Human Factors and Ergonomics Society. Currently, Pritchett also serves as reviewer or consultant to several GAO and NRC reviews of various aviation programs in cognitive engineering, human factors, and air transportation.

Carlos Sanches is specialized in Jazz / Blues guitar by Hot Club Portugal and piano at the National Conservatory. After graduating, he has been part of various musical groups, merging the Portuguese guitar with various instruments from different countries and ethnic styles. His unique and exclusive techniques, which promote unity among people from different cultures, led him to present his work in several European countries, including England, Spain and France.

K. Eric Drexler, Ph.D., is a researcher at Oxford University and author whose work focuses on advanced nanotechnologies. His 1981 paper in the Proceedings of the National Academy of Sciences established fundamental principles of molecular design, protein engineering, and productive nanosystems. Drexler’s research in this field has been the basis for numerous journal articles and for books including Engines of Creation: The Coming Era of Nanotechnology (written for a general audience) and Nanosystems: Molecular Machinery, Manufacturing, and Computation (a quantitative, physics-based analysis). He recently served as Chief Technical Consultant to the Technology Roadmap for Productive Nanosystems, a project of the Battelle Memorial Institute and its participating US National Laboratories. He is currently working in a collaboration with the World Wildlife Fund to explore nanotechnology-based solutions to global problems such as energy and climate change.

Helena Gomes is graduated in Environmental Engineering (2000) and has a Master in Geographical Information Systems and Science (2005). She won several honors and awards, such as: 1st Place in the Entrepreneurship Elevator Pitch contest by FCT-UNL, 2011; National Research Prize on Waste Management “Lobato de Faria”, 2005; 3rd Place in the Environmental Engineering best student award by the New University of Lisbon, 2000; Merit scholarship by the New University of Lisbon, 1999. She worked six years in environmental consultancy and GIS project management. Helena worked also as program manager and was responsible for the environmental and radiological monitoring of uranium abandoned mines in Portugal. Helena is currently a PhD student at FCT-UNL. She is studying the electrokinetic remediation of soil contaminated with persistent organic pollutants using iron nanoparticles.

Inês Gonçalves has a Bachelor Degree in European Studies and International Politics and a Post-Graduate Degree in Web Technologies. She describes herself as an enthusiastic for nature and sports. Living in the Azores for the past 10 years, only last year that she decided to develop an e-commerce project that will expand the visibility of this wonderful region to the world. Inês works in Decathlon Portugal since October 2011 and is now trying to take up as a young entrepreneur, in order to shape the project: E-commerce Açores – Azores Shop.

Joana Moura was born into a family of chemists with a vocation for the arts, and in 2005 decided to change her life and devote herself to her passion – cooking. Graduated in the pastry from the Cordon Bleu School and Pierre Hermé, and in the kitchen from the Ritz Escoffier School in Paris, she has participated in four meetings “Science, Cooking and Art” in Paris organized by Professor Hervé This. In 2007, Joana founded along with four Portuguese scientists the Cooking.Lab Company, which is a reference in innovation in gastronomy, whose core business is Research and Development in the area of Gastronomic Sciences – dissemination of the science “Molecular Gastronomy”. Joana has been a consultant in gastronomy to various restaurants and cooking professionals, such as: Chef Luis Baena, Quinta de Catralvos (Azeitão); Chef Henrique Sá Pessoa, Sheraton Hotel (Lisbon); Chef Ljubomir Stanisic, restaurant 100 Ways (Cascais); Chef José Avillez, restaurant Belcanto* (Lisbon).

João Barradas began studying accordion at 6 years of age in a small music school in Samora Correia and with only 9 years old enrolled directly in the 2nd Degree Official Course in Accordion, with professor Anibal Freire. Since 2010, João is studying in France with a world-class teacher Frédéric Deschamps. That same year, he concluded the Jazz Course at JB Music Jazz Center in Lisbon, under the musical direction of pianist and jazz composer Paula Sousa. It is currently in the 2nd year of the Degree in Jazz Performance at the School of Music in Lisbon, under the guidance of Professor João Paulo Esteves da Silva.

José Azevedo, Ph.D, is an associate professor in Oporto University. His primary research interests are in Public Understanding of Science, Science Documentary, Digital Divide and New Media Literacies. Has been involved in several research projects that evolve around the issues of “Media” representation of science, raising public awareness of science and science literacy.

Maria Bacharel Carreira is a Phd student in Architecture at Instituto Superior Técnico (IST) and is part of the research team of IN_LEARNING (http://in-learning.ist.utl.pt/) project since 2010. Her research interests are focused on space-use analysis applied to university learning spaces and other knowledge transmission scenarios. She holds a Master Degree in Architecture from IST, after which she practiced as an architect for several years.

Maria Ribeiro is head of the Disabled Student’s Office, from University of Porto, since 1997. She graduated in Modern Languages and Literature – English and German Studies and has a post-graduation on Information Science, by the Faculty of Arts (and Humanities) of University of Porto. She participated as coordinator in the development of BAES – Open Library for Higher Education, an on-line data base with accessible information, and Places – Website for accessibility a tutorials both in text and video, a simple and straightforward way of teaching and learning. In collaboration with University of Lisbon – Faculty of Science and Faculty of Letters, Maria coordinates GTAEDES, a work group for the support of students with disabilities in higher education institutions.

Marta Inês Silva has degree in Business Relations and Languages at the University of Aveiro (2013). She has also studied in the University of Nottingham, United Kingdom for six months, in the Erasmus Programme. During her academic years she was involved in projects in many different areas, being the main one called “American Corner Prize in the area of science, technology, economics and social science” the theme being: “The influence of national culture on the economy of the country.” She has also participated in the conference ”Recipes for Success” and in the lecture “Management – Alliance between theory and practice” both at the University of Aveiro.

Micael Oliveira is a PhD student in particle physics at the Instituto Superior Tecnico (IST) in Lisbon. He earned Licence degree in applied physics from the University of Strasbourg in 2010 and a Masters degree in physics engineering from the IST in 2012. He is a FNR/Marie Curie PhD fellow since the summer of 2012. He has been working as a researcher at the Laboratório de Instrumentação e Física Experimental de Partículas since his graduation. He is an official member of Pierre Auger Collaboration where he is currently working on the fields of data analysis and computational physics.

Rita Pontes earned a bachelor in Materials Science Engineering at Faculdade de Ciências e Tecnologia, Universidade Nova de Lisboa (Lisbon, Portugal) in 2012. In the same year, she began her studies for a Masters degree in Micro and Nanotechnologies Engineering at the same institution and worked as a trainee in the area of microelectronics soldering for Ynvisible company. Currently attending the first year of the Masters, she is developing projects in areas such as biosensors, cellulosic materials and energy conversion. Rita is also a representative of Materials Science and Nanotechnologies students in the Pedagogical Committee (FCT-UNL) since 2011 and member of iNOVAfuture – Association, where she is currently working as team manager of the Thermocromics project.

Sérgio Isidoro is a Information Systems and Computer Engineering student from IST, finishing his BSc and starting a masters in Intelligent systems major. He has always been an active member of the student community, participating in various student groups. He is a hacker, in the sense of “break, learn and build”, open source enthusiast, and a wannabe entrepreneur. He is interested in the potential applications of big data, data mining and machine learning in solving daily life problems, and society issues, always with responsible and fair use of data.

Tiago Soares is graduated in Tour Operator Management by the Escola Superior de Hotelaria e Turismo do Estoril and has a Post-Graduation in Web Technology by the Universidade dos Açores. He is truly passionate about the Tourism industry and Human relations and is a teacher at several different vocational schools. He is also the Director of Sales and Marketing at GrupoCiprotur, where he is responsible for all the commercial aspects such as promotion, contract elaboration and sales of the four hotels belonging to the Group. He is also their Channel Manager and Hotel websites content manager He has applied this combination of practical experience with the joy of all things web technology related for the benefit of improving work relations in the tourism industry, as well as promoting a more conscious and eye-opening view of this industry to his students.