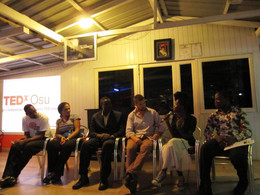 The TEDx event in Osu, Accra, where we together envision Ghana in the next 10 years, with a focus on areas such as Women's Rights & Creative Arts, Technology & Social Change, and Education & Enterprise.

Event type:
TEDx in a Box (What is this?)

Mamle Kabu, a writer of Ghanaian and German parentage, was born and raised in Ghana and completed her education in the United Kingdom where she studied at the University of Cambridge. She returned to Ghana in 1992 and her day job is as a freelance consultant and researcher in development issues. She has published short stories in international anthologies and journals and one of these, ‘The End of Skill,’ was nominated for the Caine Prize for African Writing in 2009. In 2011, she won the Burt Award for African Literature for her young adult novel ‘The Kaya-Girl,’ published under the name Mamle Wolo.

Jojo Abot is a Ghanaian Afrobeat and jazz singer. She hails from the Volta Region of Ghana, home of the spiritual and emotional Ewe people. She found her passion and talent when, as she describes it, she was “discovered by music” in a pub in Brooklyn, New York. That fateful night started her journey which ultimately led her back to her home country. For the last two years, she's lived in Accra, exploring the native beats and sounds of her home within Accra's burgeoning creative community. Her influences include Afrobeats legend Fela Kuti, highlife legend Ebo Taylor, Nigeria's neo-soul singer Asa, Australia's jazz singer Sia and jazz greats like Billie Holiday.

Ato studied at MIT and Stanford in civil engineering and management disciplines, and worked at Google as a program manager building sustainable tech communities in Africa. He works at Rancard as product manager building new revenue services, and as Director at GhanaThink Foundation as part of which he co-founded the Barcamp Ghana project. The project is building a movement of Ghanaian change makers, doers and entrepreneurs and supporting ideas such as businesses and projects. He also co-founded Museke.com, African music website and service.

Jacob is a human rights activist. He graduated with a degree in Business Administration from Dublin with Advanced Certificates in Journalism and Administration. He is the Chairperson for the La Youth Association.

Gabriel King Akpalu is a marketing consultant, leadership advocate, business advisor, transformational speaker, social entrepreneur and a writer. A young man who seeks to contribute to the corporate value of any organisation by involving his practical skills with a high sense of commitment to deliver excellence with any engagement or job description. Gabriel is the Marketing Executive of Kings Packing & services limited, International relations manager of Megafame Foundation, board member of Margaret Maku Cervical Cancer Foundation and Special Advisor of Enactus, University of Professional Studies.

John Roberts is currently the President (pro tempore) of the Open University of West Africa and a founding Board Member of Hub Accra. He has a Diploma in Cuisine and Pastry from Le Cordon Bleu, a Bachelors in International Affairs from the American University of Paris, and a Masters in Public Policy from the National University of Singapore (with a semester at SciencesPo Paris). He left his Doctorate in Education at Pepperdine University in order to focus on his work with the Open University of West Africa. He has worked in Niger with the World Food Program, co-founded a non-profit organization, and a social enterprise. He is a Global Shaper at the World Economic Forum, An Ambassador of the Sandbox Network, on the Executive team at the Kairos Society, as well as a Fellow at Power of Youth. His research is focused on development assistance, education, Africa’s role in geo-political affairs, and technology’s role in economic growth. He has consulted for the World Bank on entrepreneurship training in Ghana. He has traveled extensively throughout the world, speaks fluent French, basic Spanish, and basic Mandarin. He is an avid hiker, enjoys surfing, and creating art.