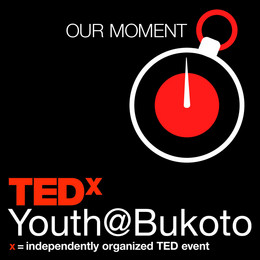 TEDxYouth@Bukoto is a forum where some of Africa's most dynamic and creative change-makers will share the inspirations that motivates them, explain how they apply their ideas for social good, and articulate their vision for Africa. The event is sponsored by the U.S. State Department’s Office of the Special Representative to Muslim Communities, the Office of Global Youth Issues, and U.S. Mission Uganda.

"Our Moment" - There is something happening in Africa that the world needs to see: young voices from all over the continent are shaping the future in new and innovative ways. They are harnessing the untapped energy and potential of African youth to create a new future for themselves. Come hear their stories, and be inspired to make change happen yourself.

Emmanuel is a Youth Advisor to Washington and president of the Business Leadership and Entrepreneurship Skills Development (BLESD) Network. He is the CEO and co-¬founder of Mwoto Factories ltd. Mwoto Factotries produces highly fuel-¬efficient, low-¬cost, low-¬emissions gasifier stoves that use low-cost fuels, such as agricultural wastes that are readily available to the general public. This stove business is an outgrowth of the World Bank (Bio Energy Initiative for Africa) -- a project that was executed by CREEC.

Grace is a Global Changemaker and emerging Social Entrepreneur. She is a worthy alumni of the US Department of State-sponsored program, Study of the US Institute (SUSI) on Social Entrepreneurship and a 2011 award recipient of the Michelle Obama ‘Young African Women Leaders Small Grant’ in support of her work. Founder of RYPE Initiative, a leading afterschool youth development project in her local community, Grace has actively initiated programs that benefit in-school and out-of-school youths and has directly impacted 240 of them. Selected as one of Google’s Brightest 12 Young Minds in 2011, the young change-maker is poised to create value and help young people develop their potentials.

Diana Mpyisi is the Founder and Managing Director of Blue Oceans, a communications consultancy firm. Some of her previous professional roles include Director for Communication and Protocol in the Office of the First Lady of Rwanda, and English news anchor at Rwanda Television. She is a columnist for The New Times Newspaper, and various publications in Rwanda. Other current involvements are Co-Founder and organizer of Spoken Word Rwanda, an initiative that showcases poetry and spoken word from young Rwandans, as well as being the Founding Curator for the Global Shapers Community for Kigali, which is an offshoot of the World Economic Forum. Diana undertook her undergraduate studies in Journalism and Politics at the University of Johannesburg, South Africa, followed by her graduate studies at the University of Warwick, UK, with an MA in Creative and Media Enterprises, where she was a recipient of the prestigious UK Chevening Scholarship.

Edward is a tech entrepreneur who co-founded, Nandimobile.com, an award-winning Internet start-up in Ghana with two other co-founders after graduating from Ghana Meltwater Entrepreneurial School of Technology (MEST). In Feb 2011, his company won the BEST BUSINESS Award at the Launch Conference organized in the Silicon Valley. He is also an Executive Member of BloggingGhana, Ghana’s biggest association of bloggers and social media enthusiasts.

Amarachi A. Igboegwu is a Public Speaker and a Social Entrepreneur. She is the Co-founder of The Weaving Project in Abuja, Nigeria. The Weaving Project empowers rural women in Abuja by training them on weaving discarded fabric pieces (usually from local tailors) into beautiful rugs that are then sold. The Weaving Project is environmentally friendly because of its recycling element and in addition, it empowers women who have no income generating skills. Amarachi was also a participant at the recently held Europe African Young Leaders Forum in Windhoek, Namibia sponsored by BMW Stiftung Herbert Quandt. She is passionate about developing human capital in rural communities and is encouraged by the impact being made by The Weaving Project thus far.

Dedo held a fellowship with Global Health Corps marked his transition to a world of possibilities where youth from across the world work together on addressing social and political challenges they are facing. He currently works as an independent consultant in creative and strategic development with a number of civil society organizations. He organized the first flash mob ever in Burundi about healthy style by hip hop dancers who influenced other youth in changing attitudes.

Precious is the founder and director of Girls Development Initiative; a girl empowerment organisation based in Bulawayo, Zimbabwe. Her work through this initiative has seen her reaching out to over 2500 young people in the first year of operation alone. She has recently awarded the prestigious Goldman Sachs 'Global Women Leaders' award at this year's Fortune Most Powerful Women summit. In 2011 she was also picked to participate in the Young African Women Leaders forum headed by Mrs Michelle Obama in South Africa; shortly after which she won the Young African Women Leaders grant competition.

Rabison is a motivational speaker, life coach, business consultant and author. He has written a number of books. He is an alumni of the International Visitor Leadership Program (IVLP-2011) where he participated in the Young African Leaders Forum (YAL) with a special focus on Youth Engagement. Rabison has a vision of impacting the lives of youths in marginalized communities by creating platforms for career guidance, capacity building aimed at inspiring them to achieve success for sustainable livelihood. This he does through the Greatness Factory Trust, an organisation he founded in 2010.

Awel is the Founder of Concordia Africa Forum, an initiative championing the realization of the 21st century African opportunity. He is also the founder of the Young Achievers Awards, a platform recognizing and rewarding outstanding contribution of young entrepreneurs. Until recently he served as the Chief Executive Officer overseeing operations at Uganda National Chamber of Commerce and Industry, the largest private sector body representing interests of business and industry sectors. He is a privileged a member of the board of directors, Capital Markets Authority, and serves as Founding Chairman Concordia Volunteer Abroad program Uganda.

Nahla is a 22 year old recent graduated from the University of Khartoum. She is a theater actress and playwright . Nahla is a Generation Change member, an activist in social change via Art, and the winner of the runner up prize in the "Francophonie" contest. She believes that theater is not just a method of entertainment, but also a tool for education, raising awareness, and generating positive social change. Most of her experiences in theater included plays that address social issues and those that are adaptations of famous plays that are simplified for a local audience.

Bakka is the Founder and CEO, Angels Initiatives. He is a networking Panafrican social entrepreneur who has participated in a range of businesses associated with microfinance, health, librarianship, marketing, economic development and environmental maintenance. He has worked on a microfinance project for Educate!, a US NGO. Bakka led Angels Initiatives to the first runners up position at the Anzisha Prize, in South Africa, organized by African Leadership Academy and Master Card Foundation, an award that recognizes the best young social enterprises across Africa.