TEDxUniversityofPiraeus is an independently organized itself event at the University of Piraeus, trying to create a unique experience where thinkers from Greece and around all over the world are ready to share their personal ideas.
Our purpose is to collect,inspiring entrepreneurs, forward thinkers, change agents of society and astounding performers who are the trailblazers and role models for today’s youth and they are ready to five the reigns of power.

Born in the early sixties in Pireas, he loathes spelling Pireas as "Piraeus". After brief studies of the "maritime business" in London, he employed himself as shipbroker, shipmanager and occasionally as shipowner. Being an elected member of the BOD of the Hellenic Shipbrokers Association (HSA) since 1992, he went deeply into its "Education Committee" by teaching the "art of chartering" since 1995. He is the author of the book "the Chartering Practice Manual" (ex Chartering Practice Handbook), which is officially recommended for the seminars of HSA. His hobbies are (but not limited to) sailing, theatre and literature. Few of the short stories that he wrote during his limited spare time, were published but did not turn him into a "story teller" celebrity. Nevertheless, by the spring of 2010, his satiric drama "Tomorrow again" was put on act in the "Alma" theater of Athens.

Aggelos is, among others, a student in University of Piraeus. Before finishing his BA studies, he has already collected important experience upon Marketing and Business by leading and creating Marketing Departments nationally and internationally. Additionally, ha has tried to revolutionize Greek University education by starting the first educational marketplace for University students, “Outstudying” , participated in the first Greek start up Accelerator, Metavallon with the project ASQOS. At the midtime, he has gained great experience in volunteering with AIESEC for two years and teaching high school students about Business and Marketing as a member of Royal Bank of Scotland’s CSR program in Romania. As of January 2013, he is offering his services as a Business Intelligence Analyst for Travelplanet24. If you make your way through the business thoughts and experience that surrounding him, you will also find a twice Greek Karate champion and a person that will make you laugh all night long.

She considers herself a global citizen. Born and raised on the shores of the Danube in Romania and hosted by the power of the Atlantic in Portugal, for the last 5 years. She has tried most of the areas that her economic background recommended her for, like: banking, project management, marketing and finance, but her passion for people was not being expressed in any of them. Coaching came to give a name to what she was already doing but without knowing it, and it freed her from the system, where she was not fitting. Since she took this path, she is constantly designing her life and herself along with it. She is the expression of her passion for people and uses it as a catalyser, making this world a better place with each step she takes.

He was born in Thessaloniki in 1983. He studied Applied Informatics at the University of Macedonia majoring in online branding. After finishing his studies his love of branding and graphic design combined with the family tradition of Greek food led to the creation of the companies Diavlos & Ergon along with his brother George in 2008. They are now exporting their products to European countries and plan to add new stores in the chain of their delis and restaurants. Apart from the business sector you will find that one of his favorite interests in sailing where he has been a Greek champion in the catamarans.

Yiorgos Arachovitis is a practicing architect graduated from Aristotle University of Thessaloniki, School of Architecture. Since 2010 he has been the Project Manager for the Development of the “Cultural Coast ” at the area Ietionian coast at the port on behalf of the Piraeus Port Authority S.A.. He also runs his own office “Domorinthos” in Athens, which undertakes large and small scale architectural and urban development projects, with distinctions and awards in national as well as international competitions. He has done research on the social, political and financial context of the illegal building in Greece, on Neoclassical Athens’ architecture and on other relative topics, considering the city as a predominant footprint and a common ground of human society. He had been involved in public issues and had been elected as councilor in the Municipality of Athens. For a period he had also been president of the Committee for the Town planning and Transportation. He follows architectural and art events in Greece and abroad; he is interested in art and philosophy considering reality as a flowing potential.

He is a talented Greek visual designer. His studies on visual communication brought him on the designing paths cities like Milan and Athens. Managing a modest firm based in Athens he serves clients around the globe. Simultaneously he teaches Editorial Design and Typography at AKTO College and often writes for design and IT publications about theory of design, cyber culture and computer history. His work has been awarded in USA from the National Portable Storage Association, Europe with the European Design Award and Greece with National Award of Graphics and Illustration to name a few. Pieces of his creation can be found in many books, magazines and websites around the world.

Dr. Panayiotis Vlamos is Associate Professor in the Department of Informatics at the Ionian University. He received his Diploma in Mathematics from the University of Athens and his Ph.D. degree in Mathematics from the National Technical University of Athens, Greece. He has (co-) authored more than 120 papers in international journals, conferences and book chapters. He is director of “Bioinformatics and Human Electrophysiology Lab” and “Computational Modeling Lab” at the Department of Informatics, Ionian University. He is also (co-) author of more than 9 educational books and creator of several educational materials. He has been member or principal investigator of several research projects on Mathematical Modeling and Simulation. His research interests mainly concern mathematical modeling in Bioinformatics, algorithms on recent advances in Neuroinformatics, image restoration problems and physical- chemical engineering problems, discrete mathematics and mathematical modeling in Education.

He graduated from the Hellenic Naval Academy's (HNA) and has spent a significant portion of his carrier onboard various vessels of the Hellenic Fleet. Currently, he is serving in the Hellenic Navy's Petty Officers Academy, as the Director of Studies. Holding a dual Master's Degree (ITM & DA) from the Naval Postgraduate School (Monterey-California-USA), his PhD research took place in the University of the Aegean, Department of Shipping, Trade and Transport. Since 2005, he has been lecturing in the HNA, Department of Combat Systems, Naval Operations, Sciences of the Sea, Navigation, Electronics and Communication Systems. He has co-authored the books "Electronic Navigation Equipment" & "Contemporary Maritime Transport System and the Phenomenon of Piracy"; he has also written a significant number of studies and articles, both in the Greek and the English language. Additionally, he has an extensive teaching/training activity, in the fields of navigation, electronics and international relations.

She grew up and lived in Athens, Greece. She graduated Yale University, USA earning a Bachelor of Arts degree in Political Science. For the past few years she has been living in New York working for large governmental agencies, non-profits and corporations such as the U.S Department of Commerce, and the Global Marketing division at L’Oréal USA. Parallel to her work, her passion for social impact led her to teach with Sponsors for Educational Opportunity where she prepared motivated low-income students to get to and through America’s competitive universities. Inspired by a love for her country and a vision of a transparent system and a sincere belief in the collective dynamic of the Greek people she is committed to helping work towards a virtuous society where trust in the public sector is restored. Confident in the powerful potential of the web to redefine active citizenship she created EDOSA FAKELAKI as a safe space for expression and dialogue, a unifying mechanism for change.

Savvas received his degree in Electrical and Computer Engineering from National Technical University of Athens. He has been working the technology startup environment since 2009 when his team was incubated at Facebook Fund in Palo Alto, CA. He was part of the success story of HealthLeap, a New York startup that was disrupting the doctor appointments in United States since 2010. Prior to joining Daily Secret, Savvas was the CTO of Liberis Publications (The Conde Nast Publisher for Greece), where he lead the development team. Under his leadership the media group revamped it’s digital presence and launched new digital properties for it’s magazine titles, including the sites of Vogue, Men’s Health and Glamour Magazine. At Daily Secret, he is driven by a sense of purpose: to build the first media product of the new world. 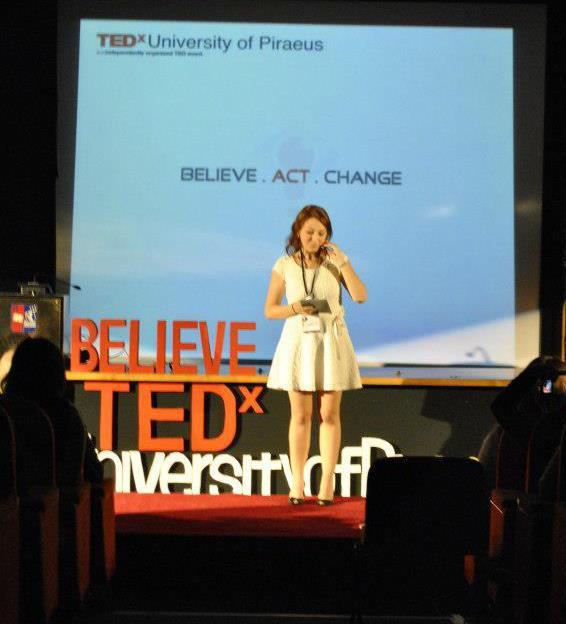