Theme: Living the Idea of Change 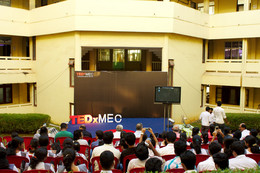 TEDxMEC stands for the mission of TED - to propagate ideas potent enough to change the mindsets, inspire youth at large and equip them to crave for a better living, beneficial for themselves and the society they dwell. TEDxMEC features toxic talks inspiring people around ranging from veteran performers and social reformers to young innovators. It serves as a stage for promoting fresh thoughts and inspiring innovation. With its inception in 2009, TEDxMEC has presented the first ever independently organised TED event in India. Eminent speakers including Hormis Tharakan, former chief of India’s Research and Analysis Wing (R&AW), Soorya Krishnamurthy, founder of the coveted Soorya Fest etc.

A veteran social figure, who has adorned the epitome positions of law and order in India, N. Santosh Hegde had been the Supreme Court Chief Justice during the tenure 1999- 2005. With his belief that injustice anywhere is a threat to justice everywhere, he served impartially for the country’s tussle towards a corruption free India. As the Lokayukta of Karnataka, Mr. Hegde demythified the supremacy of political power and tore away the masks of political frauds. At TEDxMEC 2012, Santosh Hegde will spark fire through his words on the values the young Indians shall uphold for the dream India sans corruption to come true.

An exceptionally brilliant 15- year old, Sreelakshmi Suresh made media and dailies focus on her when she became the youngest CEO of the world at the age of 10. Her company eDesign Technologies emphasizing on web design and developments reflects her epitome skills and passion for the same. Sreelakshmi who designed websites for the bar council and other government organisations is the “youngest web designer” of the world. She is the youngest ever member of the Association of American Webmasters and has bagged national and international honors including the prestigious Global Internet Directories and the Golden Web awards. The Association of American Webmasters, who has made her a member of the society, testifies that she is their youngest and the only member under 18 years of age. The Republic of India honored her talent by conferring her the National Child Award for Exceptional Achievement in 2008.

Dhimant Vyas is a creative animation film designer who worked for Zynga games, India. His animation work on the title sequence of the acclaimed hindi movie “Taare Zameen Par” stands testimony to his vivid design skills. Renowned projects as Shaun the sheep series 2, Purple & Brown and Creature Comforts has won him Academy awards as well as national and international accolades. He has proved his worth in each and every manifestation of art viz. Character Design, Concept Artwork, Sketches, Caricatures, Cartoons, Photography, Sculptures and more.

“Teen Speaker Hunt”, the novel hunt organized by TEDxMEC 2012, to find a vibrant teenager with an innovative idea to share, crowned Ashwin Sreenivas, a 12th grader of The Choice School, Cochin as the winner. Ashwin will expound his arguments on “Reforms to the Education System”.

World renowned bass guitarist Mr. Jayen Varma made it to the pinnacle of experimenting and exploring the possibilities of his favorite musical instrument- Indian Bass Guitar; he innovated the idea of Indian Slap Bass- the novel technique of applying tabla and mridangam based movements on bass guitar. The innovation has bestowed on him accolades from across the world and an Official World Record too.World’s great bass guitarists like Jeff Berlin, Bootsy Collins, and Marcus Miller reckons him as potential musician.