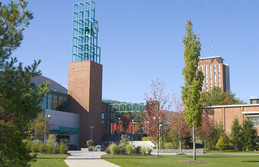 TEDxBinghamtonUniversity 2013: Sex, Tech & Rock 'n' Roll brings together prestigious speakers from around the country to give their "ideas worth spreading" on a variety of modern topics, including sex, physics, and upcoming trends in technology. Check out www.binghamton.edu/tedx for more details.

The Fall and Rise of Dating in America: A Binghamton University alumnus with an MS in biomedical anthropology and a PhD in evolutionary biology, currently a CTRD Research Fellow at The Kinsey Institute for Research in Sex, Gender, and Reproduction at Indiana University, Bloomington.

Metaphor of the Living Dead: Professor of international politics at the Fletcher School of Law and Diplomacy at Tufts University, a nonresident fellow at the Brookings Institution and a contributing editor at Foreign Policy. He is the author of four books, including Theories of International Politics and Zombies.

Homo habilis U: Reinventing the University Experience for a Changing World: Senior instructor and researcher in the Department of Geography at Virginia Tech, regularly speaks on incorporating new technologies and social networking tools into the 21st-century classroom, and produces the Plaid Avenger blog at plaidavenger.com.

If People are Getting Smarter, Why is Our Content Getting Dumber? Senior vice president of Alloy Digital and general manager of The Escapist magazine, the mouthpiece of the gaming generation.

The Discovery of the God Particle: From the Big Bang to Big Data A physics professor at NYU and a leader in the search for the Higgs boson at the Large Hadron Collider, the world’s highest-energy particle accelerator in Geneva, Switzerland; pioneered a collaborative statistical modeling paradigm that enabled the discovery of the Higgs boson in 2012.

Dark Matter: We’re Not Made of the Same Stuff the Universe Is Assistant director for science communication and higher education, NASA Sciences and Exploration Directorate, and specialist in the lifecycles of stars.

AI: In and Out of Jeopardy Artificial Intelligence expert and project leader for Watson, the computer system that took on and defeated the highest-ranked Jeopardy champions of all time on national television in 2011.