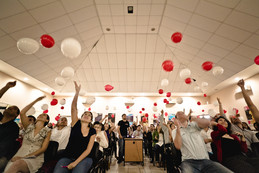 The event attracted around 190 people who filed into the common room at CLAC to watch TED & TEDxBeirut talks, partake in the ensuing discussions and activities, and check out what is new in the general format of the salon this year.

Building on the theme of last year’s main TEDxBeirut event “From Limitation to Inspiration,” the salon was entitled “From Inspiration to Action,” and the talks were chosen accordingly.

After a 15 minute introduction on the TED & TEDx concept, and after explaining the main difference between TEDxBeirut & TEDxBeirutSalon, Peter Diamandis took the screen with his inspirational talk “Abundance is our future.”

Paul Gilding’s talk “The Earth is full” followed, which challenged Diamandis’ optimism with a less colorful yet more gripping outlining of the massive problem faced by our human civilization. The audience was given the chance to elaborate on which talk they thought painted a more realistic picture of the present and the future, and which presented a more compelling argument for the need to change our ‘ways of thinking’ in order to be able to take solid action towards addressing the problems we face.

And with this need for taking action, the next TED talk screened was David Kelley’s “How to build your creative confidence?” The audience took part in an activity that stressed the importance of letting go of the fears that hold us back from taking creative action: they wrote their fears on balloons that they released all at once.

Then, the new feature of TEDxBeirut salons for this year was introduced to the audience: the contribution of live speakers from TEDxBeirut 2011. This time, TEDxBeirut 2011 speaker Ziad AbiChaker was there to talk about the ‘action’ he has been part of since the main conference last year in September.

After screening his TEDxBeirut talk, the floor was open to Ziad to tell the community about his latest updates and innovations in waste management in Lebanon (the evolving "eco-board"). The audience was thrilled to learn of his solution to the latest rotten meats crisis (300 tons), where his plant was able to process 10 tons of meat daily, turning them into internationally-certified organic compost.

The attendees were then given the chance to ask Ziad any questions that they had in mind and to get involved with his future projects in that field. Ziad also volunteered to collect the balloons released at the event and incorporate them into his ingenious "eco-boards."

The salon wrapped up by Patricia introducing and thanking the new team for this year, after pulling off a promising first TEDxBeirutSalon.