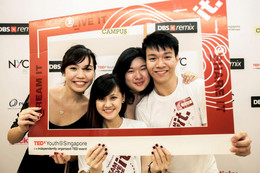 This was the third TEDxYouth@Singapore event, and the 19th TEDx event community-created by TEDxSingapore since 2009.

TEDxYouth@Singapore 2012 was curated and created BY the youth of Singapore themselves to truly be an expression of who they are, their hopes, aspirations, concerns and dreams.

Speakers will share their dreams of the future they envisioned and how they are forming the building blocks of tomorrow.

TEDxYouth@Singapore brings youth together to seek a deeper understanding of ourselves and our world, and to inspire ideas and action for a better future for us all. Founded in April 2009, we are 100% Community-Created. Express your passion for ideas and inspiration, visit www.TEDxYouthSingapore.com

At the age of 13, our youngest speaker Jon Lee is a national Go-Kart racer from the Kartmaster Drakar Racing Team. An overachieving student at Victoria School, Jon has participated in and won various national Go-Kart races. Jon shows us how it’s never too young to dream, and how it’s never too young to start chasing your dreams.

Kan Lume realised the importance of keeping his eye on his dream to be a film-maker, thus, he got a tattoo of the words “film-maker” on his hand. The award-winning film-maker has directed several films and local television programmes. He is now sharing his joy for film-making by teaching at Singapore Polytechnic. He tells a story that will compel us to fight for our dreams no matter the obstacles that are evident in today’s Singapore society.

Who would have thought that the brains behind popular social initiative “While You Were Sleeping”, was once afraid of being different? Josiah, a film student at Chapman University, started this heartwarming social movement as part of his dream to spread positivity. “While You Were Sleeping” started out simply with the idea of being nice. This begs a question - is being nice, being weird? Or, maybe the real question to ask - is being weird, wrong?

Le Cordon Bleu-trained Chef and cookbook writer Janice Wong creates desserts using innovation and creativity. The owner of 2am:dessertbar and 2am:lab claims her innovative desserts and cookbook are created on the foundation of a “unique way of seeing and thinking”. Janice will share with us the basic ingredient of dreaming and the one thing that holds a dream together.

Coincidentally, Daniel Wong lives by the phrase “Dream Big. Start Small. Act Now.” Daniel was 19 when he became increasingly aware that the materialistic awards and achievements could only go so far in helping him feel truly satisfied. Since then, he embarked on a journey of holistic personal development and even wrote a book entitled “The Happy Student”. Through his talk, Daniel will remind us of the importance of people in our process of dreaming big.

A graduate from Singapore Management University, Joanne is passionate about marketing and corporate communications and has always dreamed of working in an advertising agency. During her time in SMU, she was given the opportunity to develop the “I Still Have A Dream” project and put together a video to show the world two things: What people of today are studying to be, and what they actually dream of becoming. This project opened up a new path for her when she realised she wanted to do social campaigning. She will share with us the struggles of holding onto a belief that she was persuaded against, and how this belief can change one’s destiny.

A self-motivated young lady, Krystal holds strong in the belief in living each day to the fullest. The enterprising youth specialised in strategic marketing communications, with a heavy focus on the events industry. She quit the corporate world to be a Marketing Director for the non-profit start-up “One-Cent Movement”. Just as how we can change the world cent by cent, Krystal shares with us how we can achieve our dreams step by step.

Kumaran is a 27-year-old medical doctor at Tan Tock Seng Hospital. He is the first Singaporean who summited Mount Everest to raise funds for a charity cause and encouraged the public to donate a total of $30,000 to the Tan Tock Seng Community Charity fund through his widely publicized summit to Mount Everest. As successful as these amazing feats may seem like, Kumaran reflects on the failures in his successes and tells us how the two words “success” and “failure” go hand-in-hand.

Georgina Chin is “The Accidental Photographer”. The professional counseling psychologist and mother of three describes her relationship with photography as “a gift, a talent, or maybe a passion”. Georgina has independently and successfully published a book named “Birds in My Backyard”. Being a bird photographer has never been on Georgina’s cards in the past, yet her bird photography adventure is characterised by many accidents with one purpose.

Shiao-Yin is the founder and creative director of Thought Collective. Under Thought Collective’s entrepreneurship umbrella are School of Thought, Think Tank Publishing, Food For Thought, Thinkscape Learning Journeys and Common Ground. These social enterprises are said to “offer new possibilities in the way Singaporeans live, think and serve as a community”. Along her long entrepreneurial journey, Shiao-Yin discovered a common misconception about dreams and will reveal the truth about achieving your dreams.

David studied design in LaSelle College of the Arts and is currently engaged in freelance design as a career. In his time at LaSelle, he developed a project called “Ethics for the Starving Designer” where he posed the issue of design ethics for discussion on Facebook. However, he dreams of becoming a writer someday, and yearns to write about Heroism in today’s context. In the midst of achieving his dream, David finds the true significance of dreaming - of coming full circle. 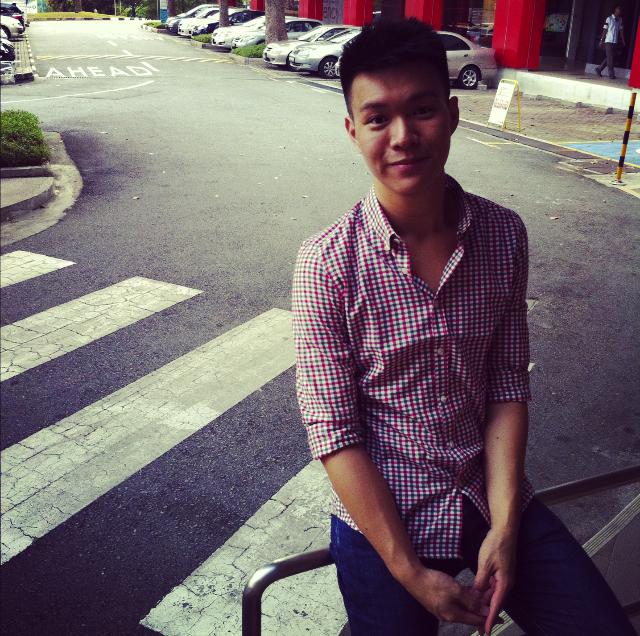