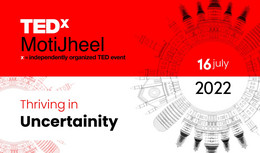 The theme of our TEDx event is “THRIVING IN UNCERTAINTY” and organizing it is yet another attempt towards enhancing learning by sharing the ideas and ideology of individuals belonging to different spheres of life, whose journey can inspire millions.

Amitesh Sharma is the Founder and CEO of Acetians Technologies Pvt. Ltd. He is a visionary leader with a strategic mindset, which allows him to maneuver through tough circumstances with his wit and grit. In the initial phases of his career, he was rejected by TCS in a job interview. He then decided to start his own IT company which is now worth crores and has worked with clients ranging from multinationals to government bodies like Indian Army, Indian Airforce, CPWD, IGST, and CUGL, and offices in Delhi, Mumbai, and Kanpur. From his friends and family in the village not aligning with his grand vision, to the big city folks often not believing in his skills and talent, During the COVID-19 pandemic when a lot of businesses were struggling to stay afloat, Amitesh’s IT venture Cloud Education trained more than 1,25,000 students and 50,000 teachers on Microsoft Education, a feat that was covered in coveted national media outlets.

Dr Aarti Gupta belongs to the promoter family of the Jagran group, a business house with interests spanning across media & communications, education, real estate and hosiery exports. Dr Gupta heads the investment strategy for the family office and is the Chief Investment Officer at DBR Ventures, an angel investing entity that invests in smart and transformative early-stage start-ups. She is an investor on India’s first reality start-up funding TV Show, Horses Stable. Named amongst the 22 Top Women Investors in the country by Inc42, she looks for companies with innovative and transformative solutions to problems that exist on a larger scale. She is an immediate past Chairperson for FICCI FLO Kanpur and is currently serving as the National Head for FICCI FLO Start-ups, an ecosystem for women founders and funders, where she has been instrumental in bringing forward pertinent issues related to the growth of women entrepreneurs both at the state and national levels.

Dr. Amit Kumar Pandey (PhD, Robotics and AI) is robotics and AI scientist. He is the co-founder of beingAI, the world's first transmedia AI company and serves as the Chief Scientist, CTO and Chief AI Officer. He is also the founder and President of Socients AI and Robotics. He has served as the President, Chief Science Officer (CSO) and CTO of Hanson Robotics, the creator of among the most human-like expressive humanoid robots: Sophia. Earlier he has served as the Head Principal Scientist (Chief Scientist) at SoftBank Robotics Europe (formerly Aldebaran Robotics), Paris, France, the creator of among the world's first mass produced sociable humanoid robot Pepper and Nao, also serving as the scientific coordinator (R&D) of the collaborative projects of the company. In the past for 6 years he also worked as researcher in Robotics and AI at LAAS-CNRS (French National Center for Scientific Research), Toulouse, France.

Karnika Nath Pandey has been RJ since 3 years ,She is a national and international radio jockey... Did shows in US, qatar, bahrain, and basically In kanpur radio mirchi 98.3...She is not just a RJ she is also a content creator and podcaster as well.

Smt. Neetu Singh is a successful business entrepreneur and noted social worker from Kanpur. She joined her husband hospitality business of running restaurants and hotel in kanpur after completing and successfully practicing as a Chartered Accountant for some years . The Little Chef Hotel is an example of her entrepreneurship and creativity. Apart from this, she is also managing the educational institutions like Pandit Deendayal Upadhyaya School as the Secretary and assistant secretary of the VSSD College in Kanpur . She is the finance controller of the 100 year old philanthropic parent trust called Mahamandal running 7 inter schools and a college in kanpur city all being run on charitable basis . In the year 2019, Smt. Neetu Singh established the Yati Sankalp Sansthan . She is currently deeply involved in the construction of a charitable 200 bed multispecialty hospital being built in kanpur named Ram Lala Arogya dham which will be providing subsidised healthcare to people.

Sachin Sahni is a serial Entrepreneur from the Fitness & wellness domain and founder of KEEROS, GLAMOR ZONE & HEALTH ZONE .Health Zone & Glamor Zone are successful chains of Wellness & Beauty Salons head quartered in Lucknow. KEEROS is India's first brand of awesome tasting SuperSnacks & Superfoods that are certified Diabetic Friendly & Healthy for all. The award winning start up has its products selling across India through all major E-commerce portals, E- Vending machines and leading stores in North India. Keeros is already a Bestseller on Amazon. He is President of TiE Lucknow chapter. TIE is world's largest network of Entrepreneurs headquartered in Silicon valley USA. He regularly writes and speaks on the topics of Entrepreneurship, Fitness & wellness in various forums, conferences & print & electronic media.

Mr Shashank Agarwal is Dy. Managing Director of Kanpur Plastipack Ltd. A young Entrepreneur who has rich experience of more than 10 years, he is Passionate learner of new technologies and advancements, under his able leadership Kanpur Plastipack Ltd has expanded immensely and achieved new heights of success. He is a master in front line strategy and formulating marketing discipline, armed with a singular aim and vision to lead and eventually evolve Kanpur Plastipack Ltd as one of the leading FIBC producing enterprise, globally. For his exceptional work and outstanding contribution, Mr Agarwal has been honoured with the EORock Star of the Year Award 2017-18, he has been designated as President of IFIBCA and featured in brands and leaders on CNBC Tv18. He has also initiated Solar Roof tops in Uttar Pradesh in 2011, Initiated Industry 4.0 journey in Kanpur Plastipack Ltd and participated in many prestigious packaging forums.

Miss. Shefali Raj, has been an Educationist for three decades now. An Entrepreneur, a Linguist, a Life Coach , Career & Image consultant are some of the hats she wears. She is a recipient of medal by GOVERNOR for Excellence in the Field of Education and has been awarded as Career Guru by a reputed Media House. She has been conferred with Rani Lakshmi Bai Outstanding Woman Award. Shefali is also a winner of Ficci Flo award in Corporate Director category. She has also been felicitated with Brand Kanpur award for her great contribution. Recently she was bestowed with Nari Sashaktikaran Samman. Her first venture at the age of 21 "Speakwel - The Lifestyle School" is a name to reckon with. Shefali has been associated as Managing Director with PSIT Group of Colleges and has been instrumental in completely transforming the Brand Image of the organization.

Shivendra Gupta, a banker turned entrepreneur., is currently co-founder at Samocha: Stories Around Chai, one of the fastest growing tea café chain and Tea Origin, a D2C brand bringing to you the teas ethically sourced directly from Indian tea gardens. He is an avid tea lover. During his work tenure, he couldn’t find options for hygienic tea and then decided to leave his banking job in 2017 to start his tea café chain which has now grown to 10+ outlets. On the academic side, he is a BBA graduate from JIMS, Rohini and has completed his PGDM from SDMIMD, Mysore. He loves to mentor the youth and has been a speaker at Induction Programs of various MBA institutes. He has keen interest in startups and shares a belief that startups can heavily contribute towards GDP growth and job-creation.

Shreyansh Kapoor, joined the family business after completing his graduation in Business from Kelley School of Business, Indiana University (USA) and is a Certified Gemologist from GIA, (Carlsbad). Shreyansh Kapoor is winner of “Young Entrepreneur of the Year Award - 2014” at JNA (Oscars of Jewellery Industry), at Hong Kong. He has also served two terms 2014-2016 as a Regional Chairman of UP, Uttarakhand, Jharkhand, Haryana and Board of Director of All India Gem & Jewellery Trade Federation (GJF). Alongside, Kashi Jewellers has also exhibited in numerous International Exhibitions, which include Basel World (Switzerland), JCK Las Vegas (USA), JCK Orlando (USA), Vicenza (Italy), IIJS Mumbai and IIJS Signature Goa under the able banner of The Gems and Jewellery Export Promotion Council (GJEPC). Under the able leadership of Mr. Shreyansh Kapoor, Kashi Jewellers is the only jeweller in India to have won two (02) prestigious President of India MSME-National Award .

Shubhangi who is an Indian and U.K. qualified lawyer and a solicitor, holds a dual practising certificate under Supreme Court of India and law society of England and Wales. She is a managing partner and Director of chess solicitors U.K.,Featured in 99 influential women of India , 2021 edition, beautiful survivor award, ambassador for peace by UN affiliated organisation in U.K. She is a PTSD and cancer survivor . Her survival battles and story was picked by one international beauty pageant raising awareness on mental health on international platform representing United Kingdom as Mrs United Kingdom Classic Universe 2021-22. Education and ambitions were her passport to shine on the global map. Fighting the adversities , cultural difficulties she carved her way to become a successful business woman in London U.K. She runs her charity foundation MRFA FOUNDATION working in different social causes.

Sudeep Goenka is serving as Director of Shubham Goldiee Masale Pvt. Ltd. He has more than 15 years of experience as a business owner and has expertise in areas ranging from business administration to marketing to production and engineering activities. He has done Bachelor of Science, Industrial and System Engineering from Georgia Institute of Technology, Atlanta GA, USA . He has also served the Coca Cola Company, Atlanta, Georgia, USA 2006 as CSD Business Analyst. He has increased the presence of Goldiee Brand PAN India by multifold expansion in terms of number of distributors and retailer’s presence. He has deployed Microsoft Navision ERP system to run the organization professionally and centralized connection to all divisions of the group. Mr. Sudeep Goenka has created terms for streamlining the manufacturing process of the ready to eat division by setting up the state-of-the-art facility and directed marketing efforts to promote visibility and introduce new products.

Sunita Aron is a political analyst and senior resident editor, Hindustan Times (Lucknow edition), having in-depth knowledge of the political, social and economic environment, acquired over more than three decades as a journalist. Besides being the first resident editor in North India, she held charge of the Uttarakhand and Rajasthan editions and also worked as roving editor at Hindustan Times, Mumbai. A regular blogger, she provides insights into a variety of social and political issues. On the academic side, She is the Governor's nominee on the Board of Management of Haridev Joshi University of Journalism and Mass Communication, Jaipur, Rajasthan. Also member of the Management Committee of Seth Anandram Jaipuria School, Lucknow. Areas of interest : Welfare ( initiated HT Woman Award in 2011 and raised issues of acid attacks, sexual assaults, child abuse) Advocacy and Sharing learnings with students/administrators.

Swati Pandey is the CEO and co-founder of Arboreal Bioinnovations – an award-winning plant based food ingredients manufacturing company based out of India. Arboreal was started with a vision to accelerate the world’s transition to a post-Sugar world, and has been focused on developing, manufacturing, and marketing plant based, healthier Sugar alternatives to the food and beverage industry globally. In 2018, Swati was selected as the Asia-Pacific Laureate at the Cartier Women's Initiative Awards, adjudged by Cartier, Mckinsey, and INSEAD Business School. In 2019, Arboreal was selected as one of the top 50 biotechnology startups in India by the Department of Biotechnology, Government of India. More recently, Arboreal won the National Startup Award 2021 in the food processing category by the Government of India, and Swati was selected as one of the 75 women that are transforming India (2021) by Niti Ayog, GoI. 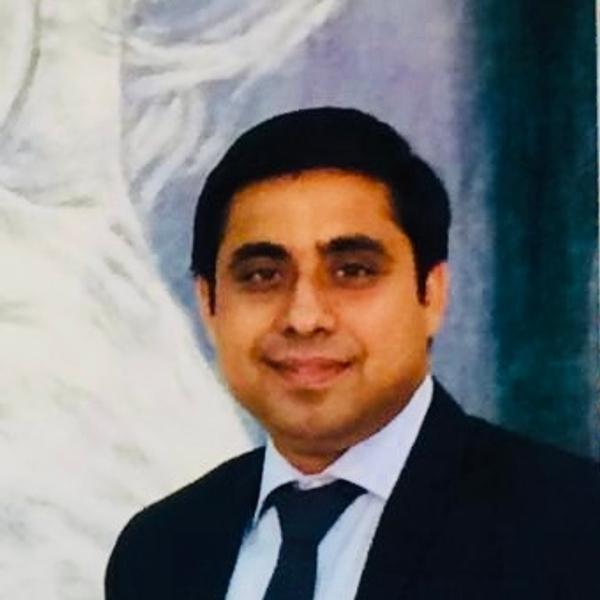 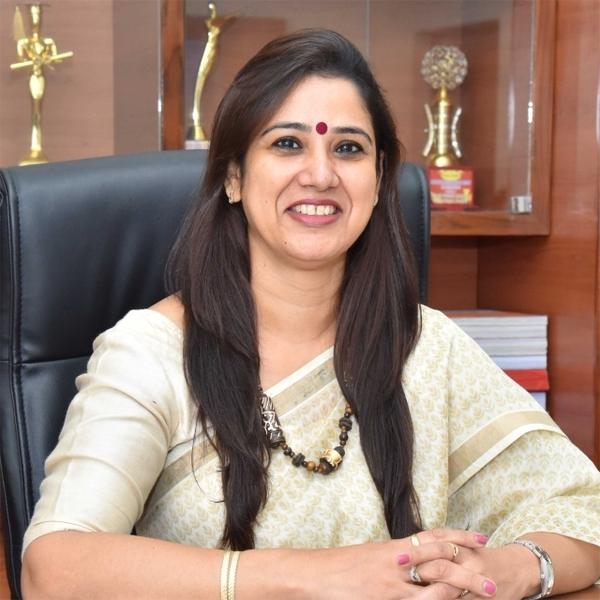