This event occurred on
May 14, 2022
Sofia, Sofia
Bulgaria 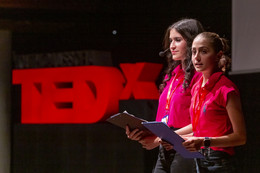 Agnes Amoh was born and raised in Ghana. Both of her parents are Ghanaians and she migrated with her family to Bulgaria in the summer of 2018. Agnes is fluent in English and her local Ghanaian dialects, however she aspires to learn French and Bulgarian. She adores learning about different cultures and traditions. She also loves listening to music, exploring different types of artistic skills and keeping active. Due to her weight and body structure she was often body-shamed. Her journey to co-exist with such comments has taught her an important lesson to just give up sometimes. Her talk “Just Give Up” transforms this fixed mindset with a new innovative idea to actually give up.

Alina was in Virginia, USA. After that she lived in Damascus, Syria and Killeen, Texas before moving to Sofia. She speaks English fluently, but hopes to learn more languages. Alina never realized how much she loved school until she was forced to go online. She likes to think about how the world will have changed after the pandemic and which innovations, including online school, will be carried into the future. Her talk “No More Snow Days”, considers how COVID-19 has forced the world to come up with innovative solutions for society to continue during the pandemic.

Jinney Han was born in Seoul, Korea but raised in Bulgaria. Her mother and father are both South Korean, making her fluent in English and Korean. She enjoys reading, soccer, volleyball, skiing and more. These activities distract her from overthinking the situations and truly enjoy the moment. For as long as Jinney could remember she viewed the world with a different lense, it was harsher and much more judgemental. She didn't think her life was anything out of the ordinary until eventually she realized that she was a perfectionist, she discovered how different her life was. This talk shines light on the lifestyle of being a perfectionist.

Kristiana was born and raised in Sofia, Bulgaria. She started learning English when she was 4, encouraged by her monolingual family. She has always loved exploring new cultures, ways of living, and ideas. Since she was introduced to the Internet, Kristiana could not stop her curiosity from getting the best of her and always felt the need to get hyper familiarized with anything that piqued her interest. Her fascination with American life has shown her how the idiom "Don't judge a book by its cover" is applicable to dreams. This talk, “A Dream Based on a Book Cover” questions whether dreams should be based on fantasies of hard facts. During the 2000s the Internet took everyone by a blast. Easy access to information and foreign media was becoming ever more present in everyone's lives. Kristiana wants to urge people to be critical thinkers, experience life, and come to conclusions by themselves, regardless of the new trend that is present online.

Lisa Bulkhater was born and raised in Zürich. She moved to Belgrade and after another two years she moved to her current destination, Sofia, and has been attending AAS since. As her parents are Swiss and German, and she's been in the international system for four years, she is fluent in both German and English. Just like everyone else she has been lied to about insignificant things that didn't make any difference in the long run, but still wonders why people lie in the first place. How do people rationalize lying? Lisa believes that lies are part of everybody's lives but the surprising thing about them is that there is no recipe to detect them. To imagine that lies have been part of humans throughout the entirety of human existence and no innovation that humans have created have been able to detect them.

Liv was born in Israel and was raised in both Israel and Poland. Liv is fluent in English and Hebrew. While growing up she was bullied by some, although she is smart, motivated and kind. Her negative experiences as a young kid led her to realise that the world could use more kindness and light. This inspired her talk titled “A Small Act of the Heart”, which outlines that by creating an everlasting spark in the world, we build up strength and happiness within ourselves. She believes that in order to transform our mindsets we must show innovation in our actions, words and thoughts.

After 15 years of career as journalist in the News Department of Bulgarian National TV, she decided to dedicate her time, thoughts and emotions to the area she grew up in - the Northwest of Bulgaria. Since then she has been developing projects for kids and adults to celebrate the arts, nature, the food and the innovative methods of teaching - through experiential learning. Mariana believes that the transformation we are facing today runs on many different levels. It is easier to observe it in a small periphery area than in a central one. However, using the languages of arts to develop and run projects gives anyone, despite age, sex or religion, the innovative tools needed in the world of rapid changes, disappearing jobs and non - guaranteed tomorrow.

Mats is Dutch but born in Athens, Greece. He moved to Bulgaria in early 2020. Mats speaks Dutch, English, Bulgarian, as well as a bit of Spanish. Having faced heavy workloads quite frequently, he decided to dive into the world of multitasking, trying to find out whether multitasking even works. His talk “Multitasking Exposed”, was inspired by investigating how multitasking affects his classmates and teachers to discover how different people portray it.

Petar was born in Sofia and raised in a small Ponorian village near Sofia called Tzerovo. Since 2019 he has been living in Sofia with his wife and child. In his career he is required to speak mainly in English as his profession is related to international communication. As a child of the mountain he has a strong connection with his birthplace and uses every possible opportunity to discover, develop and maintain areas in Ponor mountain together with friends by applying innovative approaches to make this lovely mountain popular in all touristic groups. They are using all digital tools to expand our net and create more and more friends to become real Ponorians.

Sammiewas born in Olympia, Washington from American parents. She moved with them and her two brothers to Bulgaria in the summer of 2014. Sammie is fluent in English, and knows a little Bulgarian and Spanish. When her older brother left after graduating, Sammie noticed how fast time passes, so she wanted to know how to thoroughly enjoy that time, and she realized that other people need to know how to be happier too. Her talk, “The Power of Staying Present” fits with this year's theme of Transformation through innovation because when you learn to stay in the moment and act on making sure that you do, you become not only happier but healthier.

Tamar Shabat was born in Sofia, Bulgaria. Both of her parents are Israeli. Tamar is fluent in Hebrew and English. Her whole life she has been noticing how much people want to be popular and she has realized that status and being cool are not the most important things, rather being happy is. Her talk “Balancing out Popularity”, reflects on how young people perceive popularity; why it's so important for them and what they are willing to sacrifice in order to achieve it. Tamar will talk about how we need to find balance.