Theme: Beyond the Obvious

“The most beautiful things in the world cannot be seen or touched, they are felt with the heart”, said the Little Prince once and it remains one of the most recoginzed quotes of its autor Antoine de Sent-Exupery.Curiosity, hope, belief, aspiration - is it what makes us search for the deeper sense of what we are seeing? To look for more complicated answers? To “see” not with our eyes, but through our souls, knowledge and experience? Join us on 25th June 2022 and let’s try to look “Beyond the Obvious” together. Let’s find the hidden messages of the world we are living in in order to live a more conscious life today and from now on.

Our program includes inspiring talks from changemakers and innovators from Bulgaria, fun activities and creative challenges. Some of the TED talks will be held in English and the rest will be in Bulgarian.

Aleksandar Nikolov defines himself as a visual artist and a digital person. He is a photographer who believes that images have the power to initiate social change. One of the authors of the multimedia documentary story "Man’s Last Gift" which is dedicated to the topic of organ donation in Bulgaria. Alexander is also the author and editor of the Day news podcast. He has always focused on social entrepreneurship and he is the creator of Plet (plet.bg) - a project that engages elder women in knitting scarves and tells their stories through individual photo documentaries. Aleksandar graduated in Photojournalism from the University of the Arts London. He is a scholarship holder of the Royal Photographic Society of the United Kingdom and is the winner of the Bulgarian Helsinki Committee Journalist of the Year contest in 2021, Site of the Year 2021, Time Heroes 2022, BG Press Photo and others.

Choreographer and dancer with over 8 years of experience, Aleksandra Dragova has always explored the possibilities of dance beyond the boundaries of the known. 18 months after her first self-financed performance “Second Skin”, Aleksandra brings together a team of young, ambitious and extremely talented dancers for her next big project “Dance Performance 8".She holds numerous awards: "Winner of the Annual Awards "Golden Muse" for Choreography 2019, organized by The Bulgarian Association of Choreographers, for Contemporary dance choreography - young artists, Laureate of the Grand award of Dimitar Berbatov Foundation 8th Annual Awards. As a true artist, parallel to her choreographic work, Aleks directs and designs the lighting and the stage to all of her works. Meanwhile somehow she is also working as a stunt performer. With her “PROJECT 8” Alexandra provokes us to wake up and live in harmony with time, not against it. And to look beyond the obvious.

Aric Dromi's mission is simple: to encourage society to question the narratives through which we experience our world, and to use that mass of critical thinking to enable conversations. Discussions that will elicit the change and will better prepare humanity for the enormous challenges that lie ahead. Aric spent 10 years working as the in-house futurologist for Volvo cars. His main task was to study current trends and their social and economic potentials and tell stories about eventual futures that can happen. He designed experiments that can help the company explore and map connections, actors and trends in regards to what should be its place in a given future. Aric is also the co-founder of H359, an innovation hub with a unique approach, designed to help Bulgarian companies grow in the global marketplace, and international companies invest and expand in Bulgaria. Professional troublemaker, futurologist and digital philosopher - this is how Aric sees himself.

Dimmy Deyanski left for Canada in the late 1990s, where his Eastern European origins clashed with the cosmopolitan East Coast. There he became acquainted with stand-up comedy and upon his return to Bulgaria he decided to practice and develop it. He is currently the host of the most popular “Open Mic evenings in Sofia”, co-founder of the international platform for stand-up - “Inside Joke Stand-Up Comedy” and often considered the "real stand-up" in Bulgaria. His special “DOZA Stand-up” is the first project showcasing his personal style, defined as "The American sarcasm meets Bulgarian pessimism". Dimmy is not afraid to confront himself on stage to achieve self-knowledge. He believes humor is a medicine and he gets inspired by real stories. Join him at TEDxVitosha 2022 to have some fun together.

Imagine a hotel situated in Norway’s Arctic Circle beneath the Svartisen glacier. It is fully off-grid, carbon neutral and zero waste, with the promise to be the world’s first energy-positive hotel, a powerhouse and a data center. It may sound like futuristic hot air, but it is actually happening and there is a Bulgarian trace in it. Ivaylo Lefterov is part of a team set to revolutionise the global hotel industry and to prompt it how to be sustainable. He has 22 years of experience in the industry - from site allocation and acquisition, hotel design and construction to marketing and sales. His experience covers the establishment and development of small boutique hotels and large scale resort projects in South Africa. For the Svart project his team has been awarded with the MIPIM Cannes 2021 future project award, as well as the World's Best sustainable hotel by Boutique Hotel Awards.

Kaloian Toshev has been part of the digital art and illustrations world for more than 17 years. It all started when he bought his first tablet and discovered the intersection between drawing and technology - two topics of interest to him at that moment. Since then, he has been creating and developing digital art. Rather self-taught in drawing, Kaloian is also involved in product design and is part of two startups as a lead designer and partner.He finds inspiration in female beauty and music. His goal is to create art that delights and improves the mood of its viewers. In his free time Kaloian loves and actively enjoys all kinds of extreme sports. His nickname from the Academy was “The Brain” (“Mozaka” in Bulgarian), but now he spells it MZK so that foreign audiences better understand it. Kaloian believes that NFT is the missing element in digital art.

Lilia Sophia is a psychotherapist and a trainer in soft skills seminars for parents and corporate teams. She specializes in transpersonal psychotherapy, where she explores alternative states of consciousness for mental transformation and personal development. A beyond the obvious method is through psychotropic substances, such as mushrooms. She has been trained in psychodrama method (NBU), individual and group psychoanalysis (Sigmund Freud University of Vienna), Soul Detective Work method (energy psychotherapy), mental game coaching (sport psychotherapy, Peak Performance Sports), reiki (level 1), breathing and meditative techniques. Lilia Sofia is also a kite surfer and a mountaineer, she loves art in all its forms and is an author in several Bulgarian magazines. She also appeared in two of Zornitsa Sophia’s movies - "Mila from Mars" and "Voevoda".

Ever since she applied to NATFIZ, Lyubomira Kostova preferred directing for puppet theatre because she liked the different techniques it uses - shadow theatre, ultraviolet, and different types of puppets. She is attracted by the way the actor interacts with the matter… Life there meets her with Senju Takeda, the only heir to the Takeda tradition in Japanese puppet theatre. In 2018, Lyubomira launched the theatre group "Senju" with the mission to create puppet shows and acquaint the audience with the traditions of the Japanese puppet theatre. With their performances Lyubomira and her team reveal the eternal pursuit of beauty, delicacy and perfection. When she is not working with puppets, Lubomira explores the world of virtual reality as a co-organizer of Sofia VR Fest. On June 25-th, from the stage of TEDxVitosha, Lyubomira invites us to slow down and reach a new magical sense of contemplation.

She is an Italian athlete with 2 gold and 3 silver medals at the Paralympic Games from 2012 to 2021. At the age of 18, after a dreadful accident, she lost her left leg. She started competing in para-athletics and became an inspiration for thousands of Italians. Speaker at conferences and school gatherings, she is fighting for civil rights for people with disabilities. Running and jumping with a prosthesis is not just a passion for her, but also a demonstration of inclusion and ability. Martina was flag bearer for Italy at the opening ceremony of the 2016 Paralympic Games in Rio de Janeiro. At the age of 32 she never ceases to amaze. In March 2022 in Ancona, Italy, Martina achieved best indoor world champion performance in the long jump of 5.23 m, just 4 centimeters short of her outdoor world record! She believes that sport is the healthiest way to meet one’s limits and perform beyond the obvious. She has dedicated her life to pushing the boundaries of what is possible.

His career path may have started from the military, but art is what he devoted his life to. He is a production manager and instructor at one of the most prominent acting schools “Lee Strasberg Theater & Film Institute '' in Hollywood, Los Angeles. Lee Strasberg is the father of “The Method'' - special acting methodology used by film legends such as Marilyn Monroe, Al Pacino, Angelina Jolie and many more. Paul’s wish is to challenge everyone by giving them permission to be as good as they can be. He is also a member of the prestigious “Actors Studio” and director of the actors troupe “Theater 66”. As a creative director one of his upcoming world premieres is the play “Moon and Stars” by Oscar Award winning John Patrick Shanley. His past projects include movie hits such as “The Trial of the Chicago 7”, directed by Oscar winner Aaron Sorkin.

Sylvia Ilieva believes that big data can be a unifying force for science, business and government. She is a professor at the Faculty of Mathematics and Informatics at Sofia University, a long-time head of the Dept of Software Technology, founder of the programs in Software Engineering. Since 2019, she has been managing the GATE Institute - the first center of excellence in Bulgaria and Eastern Europe for innovation in big data and Ai with applications in cities of the future, digital healthcare, smart government and smart industry. “Success for me is finding your balance, living fully and with pleasure. The health of my family, as well as the good education and upbringing of our daughter - this is true success for me.” Sylvia's personal values and high morals are reflected in her professional path, which gives her freedom and stimulates creativity in people. When she is not in the shoes of a researcher, you will find Sylvia on the ski slopes or at a jazz concert. 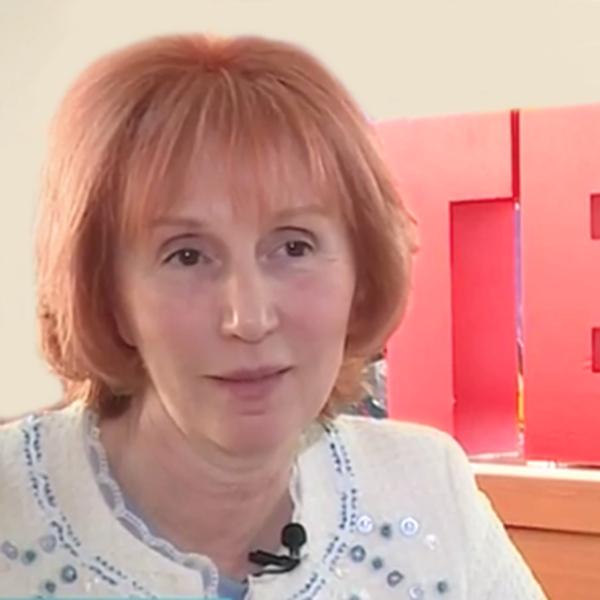