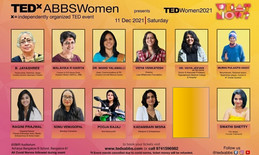 TEDxABBSWomen is an independently organised TED event under the license from TED. The world has gone through much during the first, second and yet in the fear of third wave of pandemic. We hope it’s all over! It has left us with great lessons and made us think ‘What Now?’. TEDxABBSWomen is aligned with the TEDWomen 2021 conference theme 'What Now?'. We will hear from speakers who are imagining new possibilities and exploring new ideas for how we might live and work better together in the years to come.

A veteran Indian Theatre and Movie Actress, Director, Singer and Dubbing artist. She carries the theatre legacy with 3 generations. In honour to recognize her work in the field of theatre personality, Government of India in 2013 honoured her with Padma Shri , a fourth- highest civilian award, she also received Sangeeth Natak Akademi award. She was nominated to the upper house of the Indian Parliament , Rajya Sabha. Her urge for acting started at the age of 4 performing with no mic under petromax lights. She studied at National School of Drama, Delhi. She was trained by the Theatre doyen, legendary drama teacher and connoisseur of the arts Ebrahim Alkazi and closely worked with BV Karanth. Some of her notable theatre works are Salesman, Barrister, etc., and in movies are Nagamandala, Mookajjiya Kanasugalu, Yuvarathna the recent one.

Dr Mansi is a Public Health Dentist, however her heart has always been in the field of animal welfare. With over a decade of experience rescuing, fostering and finding homes for animals, she wanted to utilize her communication skills to create a larger impact and make a difference to animals and their lives. She believes that her sense of purpose is to be the voice of animals and foster kindness for them in the hearts of her fellow humans. In our fast-paced lives, their presence among us is most often ignored and not acknowledged. We do not see the animal as a living, feeling being. In a human centric world, animals come second. Instead, they are at best seen as a disturbance, a hindrance in our urban spaces. Our Life Changes when you see them for who they are, acknowledge them and open up our hearts to them. Animals have the ability to make a tremendous difference to our lives in more ways than one.

Dr Vidya Jeevan completed her masters in “preventive medicine” from M S Ramaiah Medical College and Hospital, Bengaluru. She has around nine years of experience in the field of medical teaching/research in association with “Indian Council of Medical Research and Rajiv Gandhi University of Health Sciences”/conducting community awareness programs/Administration etc., She strongly believes in the concept “PREVENTION IS BETTER THAN CURE”. Her areas of interest is towards Mental health, non-communicable diseases, sexual abuse among children, reproductive health and allergy. She believes that as a health care professional it is one of her responsibilities to create awareness among the general public and remove the myths associated with the most common public health problems and emphasises.

Hasvi is a 13 year old mountaineer who scaled the mount Kilimanjaro, the highest mountain in Africa and is passionate about Mountaineering, Exploration and Learning. She has prepared for mountaineering for 3 months from Everest Base Camp after that bas camp she has a dream / Wish to complete all seven summits therefore her preparation to explore mountain Kilimanjaro sparked. Her early life started with skating and her dreams keeps changing. She broke the conventional mindset of focus only on studies. She has trekked the mount Everest base camp. She trains herself walking with weights, night walks , cycling, climbing stairs, badminton, Sprinting, Skipping and fitness class. And also did well in studying. She discovered her passion for mountaineering while watching a movie, she has done 2 expedition till date.

A designer, entrepreneur and NID alumnus who has led the creative mandate at companies like Coffee Day, Ola and Titan (Zoya), and is the Co-Founder of Adira Thoughtful Gifting. She has dreamt up the Iconic Women Project, her tribute to crazy, gutsy, brilliant women and their stories, told through her own re-enactments of these women, along with her interpretation of their stories. They are from different eras, parts of the world, and walks of life. Kadambari experiments with the internal and external journey of exploration and discovery as she gets under the skin of each of these women. In the process of doing this, she explores the threads that connect women down the ages, and shares her fascination with history and its power to influence our present through this compelling art project.

Passionate about the power of communication, storytelling and digital marketing, teaching, mentoring start-ups and empowering women is what drives Malavika Harita. In her earlier avatar she founded and ran Saatchi & Saatchi Focus, a specialist communications agency, in India for 25 years. She has 36 years of experience in communication and entrepreneurship. It is her belief that True Empowerment is multi-dimensional and a sociological, psychological and economic process, not a single one-time action. And the reason that nothing is really changing inspite of everyone being “empowered” is because we have not really understood the concept of Empowerment, what it really means and implies, let alone implementing it. Click here for speaker details / website / Social Media https://www.instagram.com/malavikaharita/ https://www.linkedin.com/in/malavika-r-harita

Pooja is an avid motorcyclist who has covered 22 states in India. She is unstoppable even with more than 85% of her right shoulder covered with multiple titanium plates screws and bolts. She is a fearless soul, meeting with a major life-threatening accident at 14,000 ft and springing back to pursue her passion in just 26 days. She is an MBA graduate from Delhi and has worked as an HR Consultant. She has won various medals in cycling at City and state level. Pooja was part of Dance, Dramatics and NCC( National Cadet Corps). She is a Sports & Fitness entrepreneur. She is an adventurist, and ardent motorcyclist who has worked on various road safety campaigns. She is also a humanitarian, who has been a united human rights woman president for 4 years

Mrs.Ragini Prajwal is a classical dancer & fitness enthusiast from Bengaluru. She became an entrepreneur at the age of 21 with opening her own Dance & Fitness Studio, Urhythmix. She believes that when one is able to connect with body and mind through their workout, the purpose of an exercise or workout is beyond looking or feeling fit. She has pursued her passion for dance at the age of 4&is presently under the tutelage of Smt.Nirupama Rajendra & Sri.T.D Rajendra as a graduate in kathak and performing for more than 10 years with the Abhinava Dance Company. She has also been a successful model for 8 years in TV Commercials with leading brands. She has played the female lead in the feature film 'Law' which is the first Kannada film to be released on an OTT Platform under PRK Productions. As a social media influencer, through fitness she takes every opportunity to help women understand their bodies better & have an holistic, wholesome approach towards a sustainable healthy lifestyle.

Sonu is a Stand-up Comic, Digital Creator, Radio Professional Improvisor, part time Mom. She uses Humour as Lens. Laughter and Humour is important part of human lives. Lens as a metaphor for it amplifies, diminishes, colors and distorts things. When used right, a lens can help focus, concentrate and correct our views and vision. As a predominantly observational comedian, she illustrates how the lens in her glasses helps her see the ordinary, but the humour lens lets her make a joke out of the mundane. While we make a mountain out of molehill distorting our view for humour, we tread a cautious path, since not all distortions are made equal!

Swathi is an aspiring film maker. She has studied film making from Digital Academy, Mumbai and has been a part of the production team for multiple Bollywood movies. She is currently producing a Directing a Documentary on the changing food landscape post the pandemic. She is also the founder of Elderworld, a startup focused on elevating the lives of the elderly. She is a strong believer in how human connections alter and shape one’s belief and actions and her endeavour has always been to use these interactions as a guiding light in her life

Passion, conservation, collaboration has been her mantra which led her to switch over from a successful corporate career to wildlife conservation. She believes in inclusive conservation by partnering with stakeholders like scientists, policy makers and local people. She has successfully pioneered various path-breaking initiatives in the field of wildlife conservation with tribes like the Pardhi and the Baiga in Madhya Pradesh. Her respect for traditional knowledge and skills of local communities has led to repurposing such valuable assets into alternate livelihoods. Along with her team at Last Wilderness Foundation, she focuses on reduction of Human-wildlife conflict and promotion of co-existence, both, in urban and rural landscapes. 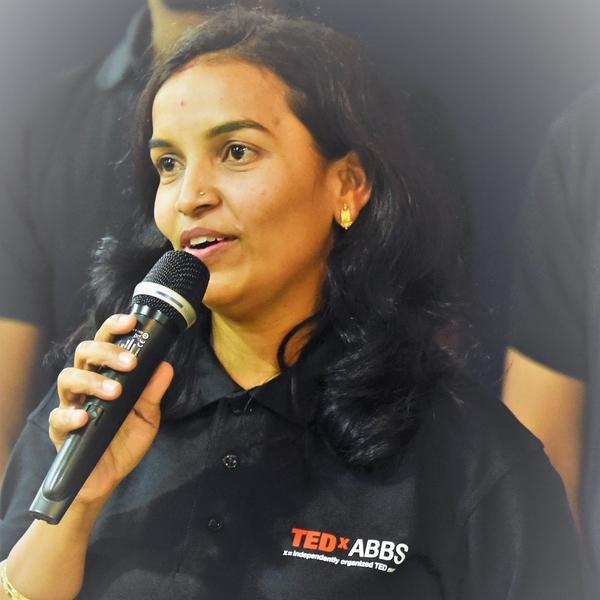 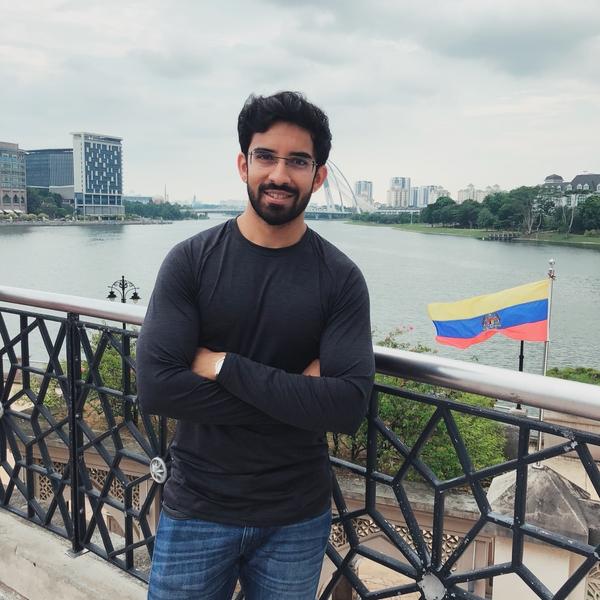