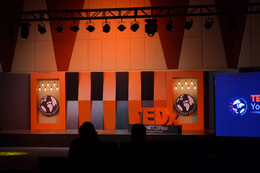 Our theme "Reimagining Reality" offers some food for thought, on how it is often our perception that shapes our lives. What we aim to achieve through our diversified speaker panel is simple: to broaden the horizons of our audience and pose a unique idea before them "What If..." - that leaves a plethora of possibilities for them

Imama Moin Owaisi is a model who unabashedly shatters the beauty standards set in the fashion industry. Throughout her life, she has gone through various experiences due to her prosthetic eye. She believes modelling is an act of defiance to the norms set in the industry, and that individuals need to be self-empowered. Her talk will install values such as resilience,

Jasir Shahbaz is a Lahore based writer, educationist and cultural critic. He runs the Qadam community school for deserving children in Lahore. His work in the field of education has been featured in The Economist, Dawn, The News on Sunday and Express Tribune. He has contributed to lifestyle sections of Samaa and The Friday Times. He writes on themes of grief, love, kindness and the extraordinary mundaneness of life. His ability to write candidly about human emotions and everyday experiences has earned him a large readership in young adults across South Asia.

Julie Khan is the face of transgender activism in Pakistan. She raised her voice against rape cases and was part of the transgender protection act in 2018. With an unflinching demeanour, Julie has time and time again fought for her rights, and even being unfairly jailed did not break her spirit. Challenging social norms, Julie is working as a model and promotes transgender entrepreneurship. She works with schools to educate and sensitise children. Julie is the voice of a community, a seeker of justice, and a pioneer in the movement towards a more equal society

Hayyan is an exceptionally bright student who has developed an interest in science and geography. Since a very young age, he has developed an interest in reading, and has developed an array of perspectives on issues students of his age are not usually aware of. He has always been challenged by his non conformity to the traditional classroom systems in schools. Through the lens of his unique experiences, he will talk about how the education system, in its current form, does not cater to students like Hayyan, who have had challenges with their experiences in classrooms.

Raza Hassan is a lawyer, a legal head in a multinational company, and an esteemed debate coach in the circuit. Donning 12 team trophies, 15 best speaker awards, and having worked with DSP for 7 years, he’s a revered presence in the public speaking circuit. Truly a man of experience, he prepares his students not only to excel at public speaking, but in all walks of life.

Sehrish Mustansar is the project lead at the office of academic advising in LUMS. She graduated from the MPhil program offered at the School of Education with 2 distinctions, the Dean’s honour list award and the Shaila and Tahir Andrabi Leadership and Service Award. Sehrish is the founder of Parwaaz-e-Umeed, an initiative for gamified emotional learning aimed at children aged 5-12. Along with her academic prowess, Sehrish is a natural leader, and loves to be actively involved in all sorts of social work.

Starting her career in 2017, Yashma has proved her mettle by starring in 25 unique roles, a testament to her versatility as an artist. A well-praised and celebrated actress among fans, she has marvelled the industry with her critically acclaimed projects such as “Azmaish” and “Pyar Ke Sadqay.” Besides her renowned talents as an artist, her dynamism is manifested through her educational pursuits in Psychology, her unequivocal stance on human rights issues, and her profound love for animals and advocacy for their rights. Yashma’s experiences have shaped her as an individual and fuelled her motives to help people going through depression, negative cycles of self-fulfilling prophecies, and drug dependency. Through events in her life that led to introspection and self-reflection, she has come to a resolution that an optimistic worldview can shape lives for the better.