Theme: The Promise of Tomorrow 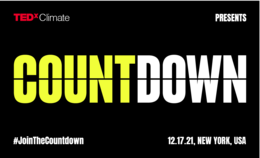 While we are aware of climate harms, we see new opportunity in the active response of the young generations at the cusp of change. Because they will lead the next decades of transition to a sustainable future our presentation will feature young people and the leaders of organizations guiding their engagement, as well as those already leading. While each speaker reflects contribution in a different sector of society, there is a common thread in their shared values. We believe their combination of inspired dedication, responsibility, and cooperation offers new promise for the future.

Andrew Rich spent his entire career thinking about service promotion among young people; as the deputy director of the Colin Powell Center, he introduced and championed its service-learning program. After he left CCNY, he built service programs into the Roosevelt Institute and then assumed the leadership of America’s premier national service fellowship. City College President Vince Boudreau. said on naming him Dean, "Given his background and these commitments, he is the right person to guide the Colin Powell School into its new era.”

Caroline Spears describes the Climate Cabinet as a “climate campaign staffer at scale” delivering local climate talking points, messaging, policy solutions, and incumbent voting records for any district in the US. Through early proactive outreach, strategic engagement, and accountability campaigns, they are ensuring that a just, job creating clean energy transition is a priority for decisionmakers at the state and local levels. The organization’s focus on climate solutions includes recognizing climate impacts on other critical needs as well, such as public health and racial justice.

Charles Sennott is the founder, CEO and Editor of The GroundTruth Project. He is an award-winning correspondent, best-selling author and editor with 30 years of experience in international, national and local journalism. A leading social entrepreneur in new media, Sennott started GroundTruth in 2014 and in 2017 launched the non-profit organization's new, local reporting initiative, Report for America. He has reported from the front lines of wars and insurgencies, on the post 9-11 conflicts in Afghanistan and Iraq, and the 2011 Arab Spring, Sennott began his career in local news covering cops, courts and municipal government. Sennott’s deep experience in reporting led him to dedicate himself to supporting and training the next generation of journalists to tell the most important stories of our time.

Evana Said was a Climate Policy Fellow at The Colin Powell School of Civic & Global Leadership and is now a Research Analyst with the World Resources Institute.

Stage manager and event producer with 15 years of experience in live production including events and corporate meetings, Broadway and Off-Broadway plays and musicals, dance performances, and tours. Adept at facilitating communication and interfacing with diverse personalities and high-profile clients and talent. Attention to detail, strong organizational skills, and flexibility in fast-paced environments ensure a project’s success from pre-production to conclusion.

Eve Zuckoff covers the environment and human impacts of climate change for CAI. After contributing to a 10-part-investigative podcast produced by WBUR and the Boston Globe and working as a producer on Radio Boston, the Boston University alum joined CAI as a Report for America Corps member in 2019. Today, as a three-time PMJA-winner and staff reporter, her stories on rising temperatures, North Atlantic right whales, transportation, wastewater, and coastal threats and innovations can frequently be heard on GBH and NPR.

Communications Director Flannery Winchester trains and supports volunteers to publish written pieces in local media, appear on TV and radio. She also pitches national media, manages and edits the CCL blog, and keeps our volunteers informed and inspired through social media and regular newsletters. Flannery came to CCL after content and marketing roles at an email marketing agency, an international software company, and a local women’s magazine in Atlanta. She began volunteering with CCL in 2015 and joined the communications department in 2017. When she’s not working, she’s probably gardening, reading, or spending time outside with her dogs.

Greg Laptevsky is Founder & Ceo of Myro, a company producing a new line of body care products that lives up to your standards and #shelfie obsessions. Myro products make you smell as good as you feel doing something for the planet. They reduce plastic, provide for reuse, and recycling as we move toward living sustainably.

Jordan Daniel is Founder of the Rising Hearts Coalition, an organization designed to elevate awareness of indigenous issues while building collaborative partnerships to accomplish equitable and just treatment of all people and the earth we depend upon through targeted organizing and advocacy. Her work includes organizing efforts to co-found DC Re-Invest Coalition (divesting DC money from fossil fuels), multiple #NoDAPL/Standing Rock events and rallies, Native Nations Rise, Women's March, People's Climate March, March for Racial Justice, #MeToo March, and #GoRedhawks culture jam parody in December 2017. Jordan is producer of two documentary films and TV series, elevating Indigenous voices and raising awareness of the epidemic of missing and murdered indigenous Women and relatives.

Murat Aktihanoglu is Co-Founder and Managing Director of ERA, New York City’s leading technology accelerator and early stage venture capital fund. He has held this position for all 21 accelerator cohorts and all Expansion Funds. Since launching in 2011, ERA has invested in more than 240 startups that are already playing leading roles in the evolution of virtually every major global industry. Murat is an entrepreneur, investor, technologist, and author. His last startup prior to ERA was Centrl, a location-based social networking company that he founded in 2008. He founded the Entrepreneurs Roundtable as a non-profit in 2007. The organization, which holds monthly free “short pitch” format meetings connecting investors with promising startups, has created a very active and engaged community in New York City helping budding entrepreneurs, investors and the local startup ecosystem. ER has hosted more than 300 events to date with more than 75,000 participants.

Philip Kahn is the Co-Lead for the New York Chapter of the Citizens Climate Lobby. He has worked diligently to build one of the most influential chapters in the network. He and his team worked with city and state legislators to negotiate important compromises to pass New York's climate mobilization law, the most aggressive in the nation. He is currently working with the NY Congressional delegation and coordinating with national to urge strong action on climate (including carbon pricing) in the President's Reconciliation Bill.

Assistant Editor of the Law Journal for Social Justice

Yash Desai is currently an Associate Editor of the Law Journal for Social Justice. He has been a Judicial intern for the Honorable Judge Wyatt Gibbons of the New York State Supreme Court, and a Legal Intern for the Massachusetts Office of Health & Human Services, and a former student volunteer with the Food Recovery Network