Theme: Our 2022 theme is "Rise" - where we aim to rise above stigmas and break the barriers of society.

Allan is a mental health advocate, international keynote speaker, and best-selling author of four books. His writing has been published in countless national magazines and he has been featured on several television and radio programs. He has also instructed various mental health related courses at the college level and spent years working as an addiction counselor and clinical case manager. Having persevered through his own mental health issues and addiction, Allan speaks from a place of experience. His moving stories tug on heartstrings, inspire a new perspective, and allow people to connect with themselves and others at a deeper level. He uses humor and compassion to create a safe space where people feel seen, heard, and supported. Allan has developed a genuine appreciation and passion for learning and working with Indigenous people and communities. This has played a key role in his own recovery and these cultural teachings can be found in his presentations.

Dr. Christine Sauer is a retired German-trained and board-certified physician and naturopath, currently working as a Holistic Brain and Mental Health Professional, Coach, Educator and Consultant. After major struggles with her own physical and mental health (including stays in a mental hospital) over 20 years ago, she made the decision for change. She applied all she knew to herself and became healthy again. As "The Doctor Who KNOWS How You Feel" her clients value the deep personal connection she forms with them as well the practical strategies, vast knowledge, and her sense of humor. She is the founder of DocChristine Coaching and The #SparkleSisters as well as “The Brain and Success System” – Strategies for a Better Brain, a Happier Life and a Better Business.

Clarisse started in academia by completing a bachelor’s in science with aspirations to become a medical doctor. After discovering the field of bioethics (the ethics of medicine and medical research), she pursued a master’s and doctorate in philosophy to study ethical theory. Her science background has proved invaluable for understanding where ethical issues might arise in a medical context. Clarisse is passionate about patient autonomy—one’s ability to live according to their values, beliefs, and preferences. Her research advocates for ways that healthcare providers and institutions can better support patient decision-making and respect autonomy. Specifically, her research considers marginalized populations and how unique social positions impact autonomy. In her spare time, Clarisse shares her love for fitness by teaching aquasize, bootcamp, and spin classes. Her favourite pastime is trying a new restaurant or café with her friends and family.

Eptehal is the Founder and Director of Mentoring for Good and a recent Electrical Engineering graduate from Dalhousie University. Eptehal is an active member of the Halifax community and has received several awards recognizing her philanthropic initiatives.

Ethan is a masters student at Dalhousie university studying physics, who loves reading and writing fiction, thinking too hard about movies, and watching video essays. Ethan has always looked forward to discovering unconventional perspectives to see the world from and tried to live up to their values. "I’ve come to appreciate that a greater diversity of experience will always make for a more complete understanding of the people and things around us, a diversity that we can’t collect on our own. I’ve always felt very alienated from my peers, so any new insight into how people experienced the world and how it was different from my experience is something I consider valuable. The more complex ideas we expose ourselves to, the better people we will become. That’s been my experience anyway."

Laya Balakumar is currently an international student at Dalhousie University. She am from India but grew up in Riyadh, Saudi Arabia. “Being a curious soul, right from my childhood, I tended to question everything around me. The process of recognizing, understanding, and then finding a solution for a problem logically was always an entertaining quest in my mind which soon turned into a passion and lead me to choose engineering to be my major. But it bought along with it another passion; words.” “I contested in an extempore speaking competition and tried impromptu speaking for the first time in my life. It also turned out to be the first time I won a speaking contest and realized my passion for it. So, one thing I would like people to know is pushing myself was one of the best things I did, and growth only comes when we step up.”

Mairen Hamilton is a fourth-year Honours Political Science student with a minor in Business at Dalhousie University. Beyond academics, Mairen is the Strategic Growth Coordinator for the Dalhousie Women in Business Association (WIBA), a passionate mentor to children seeking stability during a once-in-a-generation pandemic, and an advocate of embracing discomfort. Mairen's experience with discomfort appears in her Army-brat-like upbringing. As the daughter of a United States Army veteran, the life of an Army-brat was not farfetched. She experienced countless moves that shaped her perception of respect, vulnerability, and empathy. All of which, she argues, are required to overcome cultural barriers.

Mitadru "Drue" Mitra is a senior undergraduate student at Dalhousie University. Moving from his hometown of Kolkata in 2018, he has always been looking for opportunities in places where they're unlikely to exist. An aspiring designer, filmmaker and writer, he shares his thoughts on cultural and societal stigmas in Western society, and what it would mean to rise above them. 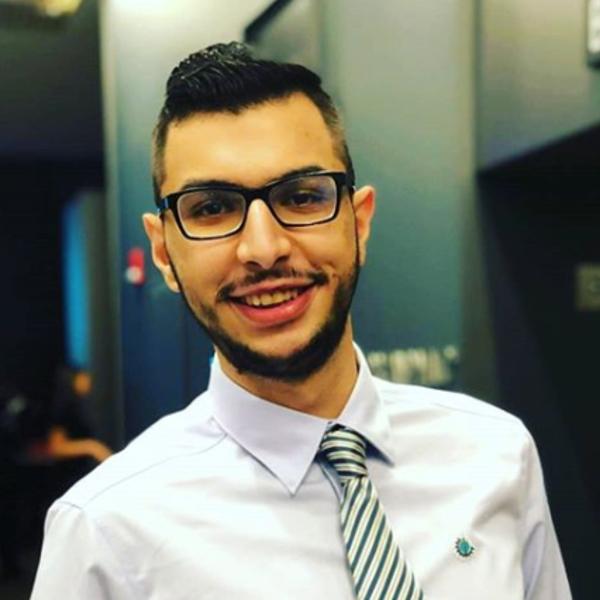