Theme: The Tale of Self Made

We’re very excited to be back with a new TEDxYerevanWomen event, inspiring theme and interesting speakers! TEDxYerevanWomen will bring you new thought provoking ideas and inspirational stories from incredible women.

Often faced with challenges, humans tend to find a light to guide them through the darkness. On the way to success and accomplishment, individuals find their own unique way of facing the storm in their lives and creating a tale of their journey. The sacrifices and the hardships along the way never make it any easier, but it takes tremendous courage to take the path that leads to one's goals and dreams, creating your own successful self-made tale.

What about a dream of hundreds, if not thousands, of people?

Contributing to their personal growth, self made individuals go even further by contributing to their communities and their development. It is an unwavering commitment to a group of people and a strong desire to make their dream home a reality. The dedication and willingness in them establishes a web of interconnected relationships that allow local and then global community government to function. Each unit operates autonomously while contributing to a larger purpose and objective.

With the theme, “The Tale of Self Made,” TEDxYerevanWomen will explore how Armenian women despite all odds, shape their identities in their own way and create their own tale, be it in their professional or personal life. Such women have not only built their own lives, but also have been paving the way for others around them and guide the development of their local communities. Coming from different backgrounds, our speakers will share their inspiring tales of courage, leadership, success, challenging journeys and more.

Mark your calendars for the upcoming TEDxYerevanWomen event and read more about our amazing speakers below.

Head of the Economic Development of Yeghegnadzor Municipality

Ani Grigoryan is the Head of the Economic Development of Yeghegnadzor municipality. She began her professional career in 2017 when she graduated from the Armenian State University of Economics. Ani has participated in many local and international exchange programs, and she brings her experience and knowledge to the development of the communities in her region. She took over the coordination of programs in the region, during which she worked with 32 young people, helping them to implement 12 grant programs. Today, Ani continues to work in the municipality but will soon start her own organization, which will unite all young people in the region and will contribute to the development of their communities. Her work experience has shown that in her community and Yeghegnadzor in general, the youth is not particularly involved in community development. Ani is ready to do everything she possibly can to bring them together, unite, motivate, and make them part of the community.

Secretary of the Staff of Abovyan Municipality

Arusyak Arakelyan works in the Abovyan municipality of Kotayk region as the Secretary of Staff. After graduating from the Faculty of Law of Yerevan State University, she has successfully carried out the functions of solving community problems in the administrative, managerial, personnel, financial, economic and property management, urban development, and other spheres. In her position, Arusyak identifies, analyzes and evaluates the issues of the strategic-organizational significance of the staff, providing their creative-alternative solutions. She has the rank of first-class community service counselor of the Republic of Armenia. Prior to becoming the secretary of the staff, she was the Head of the Legal Department of the Municipality. Arusyak worked as a legal advisor-lecturer at the Yerevan State University of Economics. Arusyak has also taught law at Abovyan State Engineering and Energy Colleges, particularly in the fields of civil, administrative, labor, and family law.

Head of the Youth Center NGO

Emilia Martirosyan is the head of the Youth Center NGO of the Margahovit village. She received a Bachelor's degree in Early Childhood Education from Vanadzor Pedagogical Institute. Emilia was elected a member of the Council of Elders in 2015. She was the representative of the village youth and established a constructive relationship between the local government and the NGO. She currently works as a chief specialist of the municipality. Her responsibilities include implementing community development programs, raising awareness for youth issues, and finding solutions. Since 2010, Emilia has participated in various workshops on the organization and development of NGOs. Emilia has been involved in implementing the girls' leadership and development GLAD camp for three years. They founded an experimental greenhouse, "Warm House," where 13-17-year-old girls can grow strawberries, study agriculture and entrepreneurial skills.

Gayane Kalantaryan is from Vanadzor. She studied at Yerevan State Medical Institute. Since 1993, Gayane has been the Chief Physician of the Lori regional psychiatric dispensary, then the Director. She currently works as a psychiatrist. She has been a board member of the Armenian Psychiatric Association for about ten years. Gayane is actively involved in the public and political life of her town. She was the first and only female member of the Vanadzor community council for about three years and is still a council member. She has also headed the Vanadzor Community Center for Children with Special Needs. Despite being a doctor by profession, Gayane was also a member of the artistic council of the Hovhannes Abelyan Drama Theater in Vanadzor. Gayane has participated in numerous local government seminars in Armenia and abroad, as well as conferences, courses in the United States, England, Scotland, the Czech Republic, Switzerland, and other countries.

Hope For Coffee and Friends

Musicians of the Hope For Coffee band and TmbaTa orchestra came together and prepared an interesting performance specially for the TEDxYerevanWomen event. They are presenting Armenian folk songs with their unique approach combined with elements of folk rock and jazz, as well as performing some of their own songs. The group includes Konstantin Abgaryants (vocals, clarinet), Zhirayr Ter-Osipyan (acoustic guitar), Stepan Veziryan (saxophone) and Vardan Duvenjyan (kahon).

Board member of the Women’s Council in Armavir

Larisa Yepiskoposyan is a member of the board of the Women’s Council in Armavir. She graduated from the Yerevan Financial and Economic College, and after that she started working at the Central Savings Bank of Abovyan. After getting married, she moved to Haykavan village of Armavir region. In 1991 she worked in the Soviet court of Armavir village as a senior supervisor, and after its dissolution she was re-elected a member of the Council of Elders 5 times. Since 2017, Larisa has been the Vice President of the Armavir Women’s Council NGO. She has two sons and eight grandchildren.

Director of the Youth Palace

Lilit Makaryan is the Director of the Community Youth Center in Armenia, Youth Palace. In 2019, she was recognized as Youth Worker of the Year. She is a journalist by profession, and she hosts a program about successful women. She has worked in various media companies, in the local government system, as well as produced many documentaries. Lilit considers herself a member of the green community. She owns a waste paper recycling business called TOOP. According to Lilit, her most significant achievement in life is her children. Lilit's life experience has always been based on one opportunity for improvement. She wants to focus not only on the problem but also on people's approach towards it. Her motto is, "We all deserve a second chance." By sharing her experience, she wants to encourage people not to despair but to strive and achieve more and love themself, regardless of everything.

Sergey Sargsyan is the co-founder of ArmComedy, writer and comedian. Sargsyan has been co-host and co-writer of the first Armenian political satire show on ArmNews channel since its inception in 2012. His previous experience include 7 years of international development projects under USAID umbrella, such as IFES (elections administration), NDI (political parties program) and USAID Anti-Corruption project. 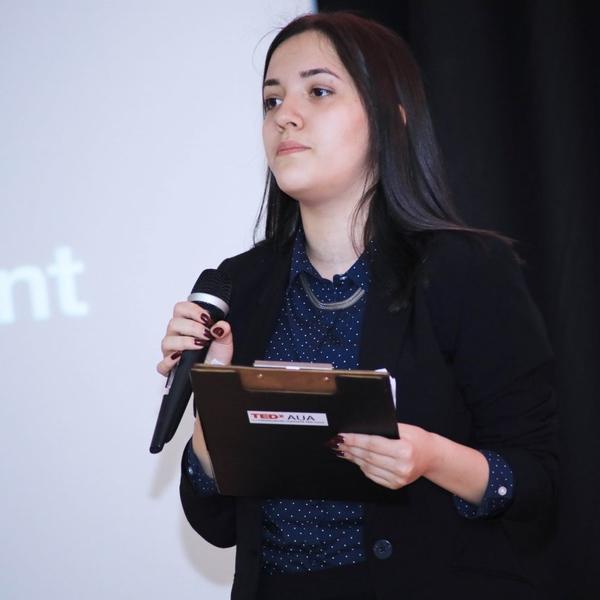