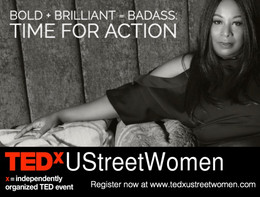 As a 6th generation Washingtonian, I’ve always known U Street to be a community build on activism. Arthur Ashe once said, “The corner of 14th and U was the grapevine. . . . If you were at that corner, you always had the sense that something big was about to happen”.

U Street was once truly the heart of black culture in America, attracting locals and visitors for an unparalleled music and nightlife scene. Perhaps not coincidentally, it’s also the birthplace of celebrated DC hero, jazz musician Duke Ellington. Today, this section of the
city is as vibrant as ever, anchored by the lively 14th Street corridor to the west and the refurbished Howard Theatre bordering the Shaw neighborhood to the east, where a towering sculpture in reverence to Ellington stands. Known as Washington’s cultural center
at the turn of the century, U Street has long been a backbone of the city’s homegrown jazz, go-go, arts, and civil rights movements. It’s both historic and colorful, boasting some of the richest culture of the city and full of bars, restaurants, and boutiques – as well as plenty of DC locals who come to enjoy the culture and the people-watching.

Once bearing the scars of riots and protests, today is no different, it has regained its rightful place as the community where something big is about to happen. It is fitting that this year’s theme, “Time For Action!”, centers around the very essence Arthur Ashe spoke
of about the U Street Corridor. From climate change to human rights and anywhere in between, our stage will be filled with global minded individuals who have ideas that tackle these challenges. The theme, ”Time For Action”, focuses on the urgency of using the existing momentum to create sustainable changes. We can’t let this moment pass, we need visionaries, like yourself, to be apart of this moment. Time For Action! Are you ready for ACTION?

Amini Bonane is a community builder, organizer, and advocate. She founded Brains Then Beauty; an empowerment organization dedicated uplifting young adults & teens through: service, mentorship, and leadership. As a Congolese American political asylumee turned citizen; she organized globally for marginalized children & women. As an advocate, she uses her title of Miss Black DC USA to raise awareness for missing black women and the violence perpetuated against us. She will receive a master’s degree in Government & Political Science from Harvard University; after completing a bachelor's degree in Finance Philosophy & Law from George Mason University, and an associate’s degree in Business Administration from the Richard Bland College of William & Mary. Amini has also received diplomas from The Sorensen Institute of Political Leadership at the University of Virginia and The Campaign School at Yale.

Colleen Marie Olinski is an educator, author, and mother who has worked with children of all ages in various settings for the past two decades. She holds a Bachelor’s Degree in Communications and is a former commercial radio On-Air Personality. Her passion for education and touching the lives of children began while working as a Residential Counselor for at-risk adolescents. Colleen earned her Master’s Degree in Education while simultaneously earning her 1st-degree black belt in Taekwondo. As an elementary educator, she worked in urban and suburban school districts. She spent 12 years teaching preschool at a play-based Yale University affiliated early learning center. A former board member for the National Association for the Education of Young Children, Colleen, is an advocate for all children and has a deep respect for childhood.

Divya Sharma is a senior in high school from Loudoun County and a Diploma student at the Nrityanaad Academy of Kathak. In addition to dancing for over 11 years, she enjoys teaching and is also an accomplished soloist and group performer. Additionally, Divya has done extensive work to spread awareness about Kathak on an international stage, as well as to create opportunities related to dance in her community. She is co-founder of The Dance Utopia, a 501c3 registered nonprofit, working towards making the arts more accessible through fundraising and workshops. Divya is also a member of UNESCO’s International Dance Council and has been invited to perform at global congresses. As a young person who started dancing from an early age, she has been able to apply lessons she has learned from dance to her life and development. Learning Kathak as a student in the United States, her mission is to build awareness of the dance form and share her culture all over the world. "

Esther Boykin is a psychotherapist who wants to live in a world where everyone believes that Therapy Is Not A Dirty Word. Whether in her role as CEO of Group Therapy Associates, a coach, consultant, author, or media expert, she works daily to make mental health accessible, innovative, and culturally relevant for all people. In 2004 with a Master of Science from Virginia Tech and a vision of making mental health widely accessible to all, Esther Boykin began her career as a marriage and family therapist. Five years later, with her passion for therapy and relationships growing, Esther began her entrepreneurial journey by opening Group Therapy Associates—a psychotherapy practice in the Washington, D.C. metro area. After several years as CEO of Group Therapy Associates, Esther expanded the company to include a new division called Therapy Is Not A Dirty Word. She was recently named a top 21 relationship expert to follow by Cosmopolitan magazine and has appeared on other media outlets.

Jori currently serves as a Director with the Texas Health and Human Services Commission. She is responsible for inspiring and developing a highly engaged team to achieve program outcomes. In addition, she is charged with finding opportunities to maximize program income, improve processes through automation and program related provider enrollment. Even with the myriad of duties, the common denominator remains with helping and inspiring people. She is a past Board member of the Executive Women in Texas Government Organization. She is a 2019 graduate of the prestigious National Leadership America program. She holds a Bachelor of Arts degree from Indiana University and a Master of Public Affairs from the Indiana University School of Public and Environmental Affairs - one of the top public universities in the country. In 2020 she was featured in The Evolving Woman e-magazine. She has spoken on a variety of platforms, for varying organizations to both large and small audiences.

Lora Cheadle is a corporate attorney turned author, speaker, women’s advocate, and burlesque dancer. Her mission is to helps women overcome the devastation of betrayal – whether by their body, life, or someone that they love – so they can reclaim their power, own their worth, and confidently engage in life again. Named a Top Influencer by Success Women’s Conference, she has spoken on numerous stages, including the Women Economic Forum in New Deli, India. Her work has been published in Thrive Global, Yoga Magazine, and Om Yoga Magazine, among others. As a lawyer turned burlesque dancer, she has been discriminated against based on her perceived sexuality. After winning her first case ever, the judge saw fit to call her into his chambers and berate her for being too sexy and bold enough to win a case against an experienced, white, male attorney. It’s time for women to be bad asses about female sexuality, and to stop equating intellect, virtue, and worth with perceived chastity.

Nicole is the Senior Director & Government Relations Counsel at Equitable Holdings. She was previously Associate General Counsel in the Office of the General Counsel at the New York City Dept of Consumer Affairs where she supervised attorneys and non-attorneys in the Consumer Protection Unit. Before joining city government, Nicole was a Senior Staff Attorney in the Consumer Rights Project at Mobilization for Justice, where she represented low-income New Yorkers in state court on consumer law issues including, unfair debt collection practices, identity theft, and foreclosure rescue scams. Nicole speaks on various topics including consumer law and leadership development at colleges, conferences, and continuing legal education programs. Nicole is the Founder and CEO of NLA Strategies LLC, a consulting firm focused on helping high-achieving rising leaders. She is an Adjunct Professor of Law at Benjamin N. Cardozo School of Law and was Chief of Staff for Brian Kavanagh (now State Senator).

Nkechi Taifa is an attorney, activist, academician and author. A passionate and visionary professional, she enjoys decades of experience as an accomplished justice system reform strategist and advocate. Taifa excels at advancing creative, cutting edge approaches that encourage out-of-the box thinking and action. The wealth of her experiences has allowed her to pursue justice from different vantage points -- as a litigator, lobbyist, scholar, advocate, policy analyst, community organizer, convener and grant-maker.

State’s Attorney Aisha Braveboy is the top law enforcement officer in Prince George’s County, Maryland. Ms. Braveboy was the first prosecutor in Maryland, and one of the first in the nation, to strategically lower the local jail population through her celebrated initiative, Operation Safe Release and by instructing her prosecutors to discontinue the practice of requesting cash-bail. Ms. Braveboy is expanding diversion opportunities for non-violent offenders. She has grown the number of participants in the Back-On-Track Program, first created by Vice President Kamala Harris which gives first-time felony drug offenders a second chance. Under Ms. Braveboy’s leadership, the program was expanded to include misdemeanor gun offenders. Ms. Braveboy graduated from the University of Maryland College Park, where she received her Bachelor of Arts Degree; and received her Juris Doctorate from Howard University School of Law. Ms. Braveboy is a proud member of Sigma Gamma Rho Sorority, Inc.

Vena Crichlow is an engaging speaker who understands the healing power of nature. For more than two decades, she has used gardening as a pathway to wellness. Her desire is to encourage people to restore themselves through connecting to our eldest ancestor, Mother Earth. Hailing from a long history of farmers, Vena grew up in a home where both of her parents had green thumbs and where her father grew tomatoes on their patio in Brooklyn, New York. After nurturing a multitude of houseplants indoors, Vena began growing fruits and vegetables outdoors. She now assists others who are starting indoor and outdoor garden spaces. Her work focuses on encouraging people to “play in the dirt” and to use gardening as a way to help them heal through the pain of grief and loss. Vena enjoys traveling, spending time with family, interior design projects and creating beaded jewelry using healing crystals. She resides in the metro-Atlanta area with her two children. 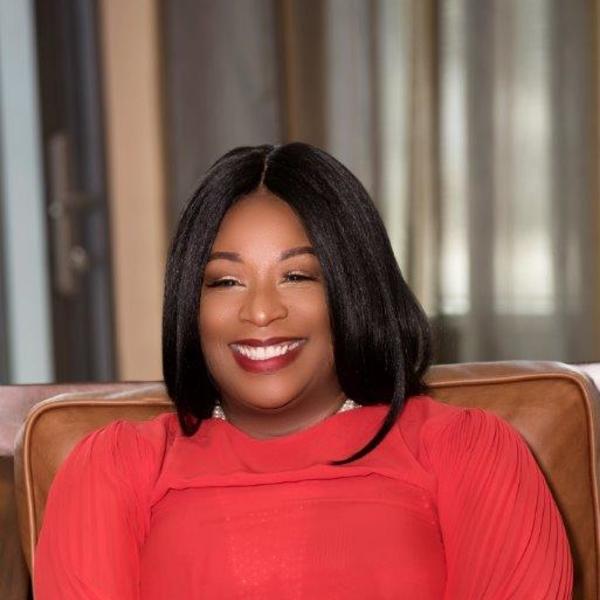