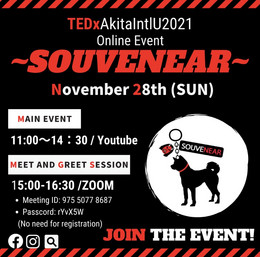 This year’s event will be held online. The theme of TEDxAkitaIntlU2021 is “Souvenear” which combines two words “souvenir” and “near”.
It is exciting to share memories and local specialties with others as “souvenirs”. While we have fewer opportunities to enjoy traveling or in-person events due to the pandemic situation, we can interact with others and bring back souvenirs online (through a computer that is “near” you). Why don’t you find your souvenear from “TEDxAkitaIntlU” and share them with everyone?

consumebusiness advisor at the Embassy of Finland in Japan

Laura Kopilow is from Espoo, Finland, and has been living in Japan for ten years. She works as a consumer business advisor at the Embassy of Finland in Japan, supporting Finnish interior and fashion companies to conduct business in Japan and introducing the Finnish lifestyle in Japan. She appeared on the Japanese TV show “Sekaiichi Uketai Jyugyou (The Most Useful School in the World)” as Laura-sensei (professor Laura) in March 2020. After studying abroad in Japan twice (Hakodate Shirayuri Gakuen Senior High School, School of Political Science and Economics, Waseda University), she graduated from the University of Helsinki. Ms.Kopilow also graduated from Hokkaido University Graduate School of Law as a Japanese Government Scholarship Student. Her hobbies are eating Japanese parfait desserts, running, and sauna.

Brendan Nikola majored in renewable energy engineering and minored in philosophy at the Oregon Institute of Technology, graduated summa cum laude, and studied Japanese at Waseda University and Akita International University as an exchange student. His interests relate to various subjects such as Tanka poetry, kintsugi, traveling, reading, collecting shrine seals, and language studies. He has had a few of his poems published in the Sakigake newspaper, and he contributed an article titled "How a Wind Chime got me into Tanka Poetry." He is also passionate about and independently researches Japanese dialects and fonds of the Akita dialect spoken in northeastern Japan.

Shin Osuka was formerly working for an American airline and currently works as an executive director at a Destination Marketing Organization (DMO) called AKITA INU TOURISM. He is in charge of strengthening a seamless relationship with the related local governments and focuses on building strong ties between residents and officers. Through his works, Mr.Osuka is passionately trying to globalize the Japanese version of DMO. In addition, as a licensed Japanese language teacher, he is committed to the popularization of the Yasashii Nihongo (Plain Japanese) as a communication tool. He likes traveling, eating around, and sharing local information through SNS.