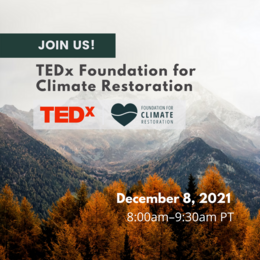 Climate restoration is a movement to remove legacy CO2 from our atmosphere and restore our climate to a pre-industrial state. Why is this important? We must go beyond net zero to provide a livable planet for humanity and future generations. While it’s critical we reduce emissions and adapt to our changing environment, 95% of the carbon dioxide causing climate change is already in our atmosphere.

Join us for this TEDx Event, as we deep dive with experts and leaders into the “why” of climate restoration, the solutions that already exist to tackle this challenge, the policy makers who are working towards this goal, and the global movement around the world. This event will acknowledge and discuss the progress we have seen in this past year while establishing a vision for 2022.

Founder and Director at Valence Solutions

Featured TEDx Speaker, Kim Stanley Robinson on his talk "A letter from 2071 on How We Solved the Climate Crisis" (TEDx Video).

Sam Daley-Harris founded RESULTS, an international citizens' lobby dedicated to creating the political will to end poverty in 1980. In 1995 Daley-Harris co-founded the Microcredit Summit Campaign which surpassed its initial goal of reaching 100 million of the world's poorest families with microloans in 2007. Nobel Peace Prize Laureate Muhammad Yunus said "No other organization has been as critical a partner in seeing to it that microcredit is used as a tool to eradicate poverty and empower women than RESULTS and the Microcredit Summit Campaign". Daley-Harris is author of Reclaiming Our Democracy: Healing the Break Between People and Government, which President Jimmy Carter said, "[Daley-Harris] provides a road map for global involvement in planning a better future." The 20th anniversary edition was released in September 2013. In 2012 Daley-Harris launched Civic Courage to help organizations deeply engage their supporters and create champions in Congress and the media for their cause

Senator Henry Stern is a sixth-generation Californian and native of the greater Los Angeles area who has represented the nearly one million residents of the 27th Senate District since first being elected to serve the 27th Senate District in November 2016. Stern has chaired the Senate Natural Resources & Water Committee since 2018, where he has worked tirelessly to bolster the state’s wildfire preparedness, push to have the state address the climate change emergency, improve our democracy and fight to help some of California’s most vulnerable members. He also sits on the Senate’s Budget, Judiciary, Environmental Quality, Elections & Constitutional Amendments, and Energy, Utilities & Communications committees.