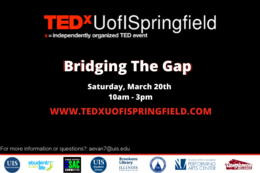 The TEDxUofISpringfield 2021 Conference will be held on March 20th, 2021 under the theme Bridging the Gap. Due to the current COVID-19 pandemic, the event will be held virtually. Streamers can watch the event live as it happens from the UIS campus. The live stream link and full agenda will be available on our website.

Associate Dean and Director of the Department of Education, Counseling, and Leadership at Bradley University

Dean Cantu is Associate Dean and Director of the Department of Education, Counseling, and Leadership at Bradley University. He has traveled to all 50 states with his wife and three children, the oldest of whom is currently a graduate student at UIS. He is a former U.S. Army military intelligence officer and high school history/social studies teacher, and currently serves as a professor of history/social studies education. His TEDxTalk on the personification of Death, within the context of the current pandemic, represents the nexus of his teaching and research specialization areas of history and social studies - particularly sociology and psychology.

Dr. Sarah L. Webb is an Assistant Professor in the department of English and Modern Languages at the University of Illinois Springfield. She launched the website Colorism Healing in 2013 to raise awareness and create change. Since then, she has reached thousands of people across the globe through her international writing contest, publications, and workshops. Dr. Webb believes wholeheartedly in the transformative power of courageous storytelling. Her mission is to create spaces for the authentic expression of collective voices.

Elizabeth is a full time UIS graduate student in the Public Administration program with a part time Graduate Public Service Internship at the Illinois Environmental Protection Agency office of Community Relations. She is proud to take the next career steps after 10 years of public service through various nonprofits. Elizabeth has served as an AmeriCorps volunteer, led after school garden club programs, directed summer farm camp programs, and taught sustainable agriculture and ESL in El Salvador. Through her studies, work, and short-term volunteerism in Thailand, Kenya, Costa Rica, Mexico, and El Salvador, Elizabeth's personal views on poverty relief, development work, and charity have evolved significantly. While she knows it is an uphill battle to change mindsets, she believes the fight is worth developing a more just approach to poverty eradication.

Meg Shadid is a recent graduate of the University of Illinois Springfield with a master's degree in Political Science. She currently teaches AP Government and AP Psychology at Olathe Northwest High School, which is located in the Kansas City metropolitan area. Meg graduated magna cum laude from Kansas State University where she studied Social Studies Education, Leadership Studies, and American Ethnic Studies. Throughout the course of her teaching career, she has received the Rising Star Teacher of the Year award from the Oklahoma Council for the Social Studies, the Economic Education Teacher of the Year award from the Oklahoma Council on Economic Education, and is also a James Madison Fellow. Meg is passionate about teaching in a way that is relevant, rigorous, and engaging, so as to help her students develop into life-long learners.

Melissa Hostetter is a 7th grade language arts teacher in Springfield, Illinois and a graduate student in the Masters of Education program at University of Illinois Springfield. She is also a trainee in the MSLE (Multisensory Structured Language Education) Practitioner program through the Children’s Dyslexia Center of Springfield. She received her teaching certificate from the University of Illinois Springfield in 2010 and earned a Bachelor’s Degree in Social Work from Asbury University in 1998. She is passionate about advocating for equity in education and sound instructional practices.

Menno Servaes is an international student from Belgium, pursuing a bachelor degree in Business administration at the University of Illinois Springfield. Menno serves as the student senator for the college of business and management and is the captain of the UIS Men’s tennis team. As a sophomore, he connected with a faculty mentor and started leading his own research project. He now uses his experience to mentor others as the president of the Research Society. Menno chooses to develop himself through intentional actions that push him out of his comfort zone. He does this by focusing on everyday decisions, such as seeking help from mentors and taking responsibility for the things he can control. Menno realizes that by fully developing himself, he can better guide and mentor others towards their highest potential.

Richard Gilman-Opalsky is Professor of political theory and philosophy in the Department of Political Science at the University of Illinois at Springfield. He is the author of six books, including The Communism of Love, Specters of Revolt, Precarious Communism and Spectacular Capitalism. He has lectured widely throughout the world and his work has been translated and published in Greek, Spanish, and German editions. In 2018-2019, Dr. Gilman-Opalsky was named University Scholar, the highest award for scholarship granted at all three campuses of University of Illinois. Dr. Gilman-Opalsky’s work explores the powers of everyday people, particularly those typically regarded as powerless. He challenges the idea that politics is solely the business of the professional political class, and highlights how impoverished and marginalized people participate in changing the world in the most important ways.

Assistant Professor in the Department of Management, Marketing, and Operations at UIS

Dr. Sharma is currently an Assistant Professor in the Department of Management, Marketing, and Operations at UIS. He joined UIS in 2015, immediately upon graduating with a Ph.D. in Business Administration from Washington University in St. Louis and Masters from the London School of Economics and Political Sciences. Dr. Sharma’s research interests include negotiation, personality and individual differences, power and status, and emotions in the workplace. He teaches courses on organizational behavior, Leadership in Organizations, Negotiation, and HR courses on the topics such as Performance Management, Selection, and Assessment to UIS students. His research papers on the role of personality and intelligence in negotiation received the 2015 outstanding article award from the International Association of Conflict Management. Most recently, Dr. Sharma was awarded the "University Scholar Award" for AY 2020-21 by the U of I System.

Taryn Christy is a junior double majoring in political science and legal studies at the University of Illinois Springfield. As a sophomore, she began working with the Illinois Innocence Project (IIP) on active client cases. Now, Taryn dedicates her time with the IIP reading applications and corresponding with incarcerated individuals claiming innocence. Taryn recognizes the distinct privilege of reading the story of every single person who applies for assistance and is immensely proud of her role in helping every applicant as much as possible. She firmly believes that every single person is responsible for building the most equitable and just society possible. Every role within this system is significant, and seemingly ordinary roles are often the most important. 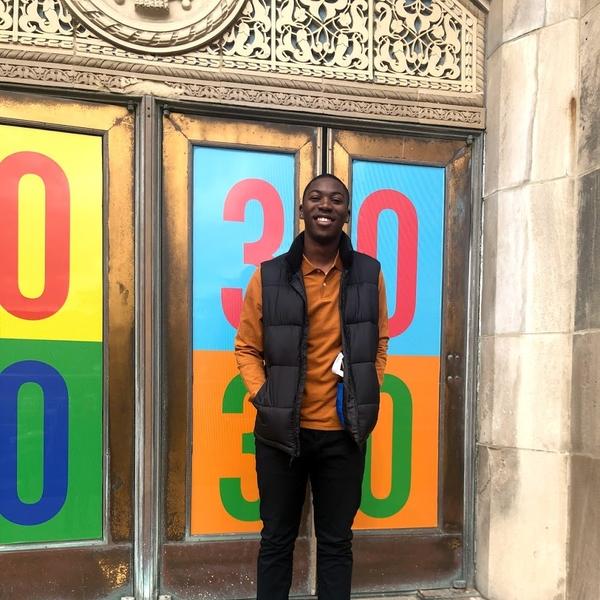