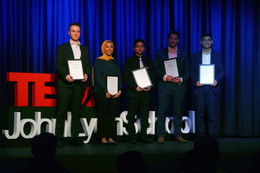 The TEDxJohnLyonSchool event will see pupils, teachers and esteemed subject experts explore the theme of Regeneration. Regeneration will be approached from many different directions such as Faith, Well-being, Medicine, Space and Education.

Chris is an astrophysicist, a teacher, and public lecturer. A Fellow of the Royal Astronomical Society, he works as Head of Astronomy at Harrow School, teaching Astronomy, Physics, Engineering and Computer Science. Chris received Masters’ degrees in both Theoretical Physics and Mathematics before completing a PhD in Astrophysics, affording him the opportunity to be part of a research team studying relic radiation from the Big Bang, and working in the same department as the late Professor Stephen Hawking.

Dhiren has just started his first year of A-Levels and is studying Economics, Politics, and Geography. In his spare time Dhiren loves to read and keep up with current affairs. He hopes to pursue a career in Politics one day. His talk takes a look into the world of wealth and the social barriers that are created because of it.

Doaa completed her Masters’ in Italy, working on Neural Stem Cells and completed her Undergraduate Degree in Egypt in Molecular Biology. She is currently doing her PhD at University College London and Francis Crick Institute in the laboratory of Professor Rickie Patani; studying a disease called Amyotrophic Lateral Sclerosis (ALS). It is a devastating Motor Neuron Disease where patients progressively lose the ability to walk, speak and finally breathe. Doaa has been using stem cells from patients and healthy donors to make supporting cells to neurons called Astrocytes, to understand their role in the disease and ultimately develop drugs for therapy.

Harry is a Year 9 student and our youngest speaker. Harry has a great interest in dancing, performing all around the country. He has competed and won nationally in both solo and duo events. Harry looks forward to starting his GCSE courses, pushing himself to deliver excellent results and an excellent future.

Jonny is Rabbi at Radlett United Synagogue in Hertfordshire, serving 700 families. In his youth, Jonny was signed by Swindon Town and Reading Football Clubs. He is a UCL Law graduate and author of two acclaimed books on Jewish law. A regular broadcaster on BBC Radio and a faith tutor at Eton College, Jonny also runs outreach and educational programmes in schools and in the City of London. He is married to Chana, a family psychotherapist, and they have five children.

Krish studies A-Level Economics, History and Mathematics. Krish is no stranger to public speaking; having participated in regional debating as well as completing his Grade 8 Drama and playing a lead role in the School’sproduction of Macbeth. Krish’s TEDx Talk will enable him to speak about some of the key inequalities associated with education.

Meera Shah grew up in Nairobi, Kenya in a large community setting. She was extremely shy as a child - and wanting to be able to speak up has led her to a passion for personal development since a young age. After qualifying as an accountant, she left Kenya to come live in the fast-paced, vibrant city of London where she became a successful banker – and currently resides. She is now pursuing her passion by helping others through writing, coaching, training and speaking around the world to be their best and achieve their dreams and goals. She is particularly interested in the space where science and spirituality meet – and to help improve the mind-sets and potential of all humans around the globe.

Mick is an Oxford-educated Biologist and has spent most of his career teaching Biology. He is a keen cyclist and is currently living in Harrow-on-the-Hill. He has not eaten meat for around 40 years and in more recent years has been consuming a whole food plant-based vegan diet. He is in no doubt that this is contributing significantly to the maintenance of excellent health and is still able to cycle long distances in his retirement.

Dr Kochaj is a teacher, a neuroscientist, and former political researcher and adviser. After reading Biological Sciences at the University of Warwick and completing a Masters’ in Experimental Neuroscience at Imperial College London, he obtained his PhD in Molecular Neuroscience from King’s College London. He has a particular interest in human disease, specialising in peroxisomes and neurodegeneration. Before joining John Lyon, he worked for two senior MPs in Parliament, mainly advising on science and health-related matters, and remains politically active.

Varun is a first year A-Level student, reading Mathematics, Biology and Chemistry at John Lyon. Varun has always had an interest in medicine and hopes to read it at university. Varun also spends time in the music department as a Music Scholar and he runs the Senior Debating Club and Model United Nations (MUN). Varun strongly believes that we should focus on a balanced diet rather than supplements and will be presenting this subject in his TEDxJohnLyonSchool talk.