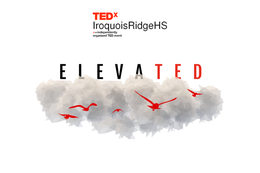 As the world changes: we must adapt and continue to climb. TEDxIroquoisRidgeHS is proud to present the theme for our online 2021 event: ELEVATED!

There is no where to go but up. City skylines grow, more of the cosmos is discovered, human potential pushes us to the top of the podium. All aspects of human existence are reaching upward: technology is reaching further and further into the unknown, society is dealing with issues impacting millions, individual lives are shaped by the desire to improve. To elevate is to rise above the standard, but also to break the roof of what is possible.

It's this idea of rising above that draws the brightest and most inspiring youth speakers from the Halton Region to share what ELEVATED means to them. Join us in understanding how they, as individuals, as a community, and as the whole of humanity rise above the present to achieve something beyond.

Alex Hu is a social entrepreneur and grade 12 student from Appleby College. Alex is also a competitive chess player of 12 years, avid reader, and aspiring cook. For the past 3 years, his non-profit organization has changed the lives of hundreds of impoverished students in rural Asia. Alex’s TEDxIroquoisRidgeHS talk “Can students enjoy school?”, will divulge insights into the education system from a student’s perspective. Through his extensive research coupled with dozens of interviews of educators and students, Alex has identified fundamental flaws within schools that only fellow students can understand. Alex will share suggestions for other students on how to navigate the modern perils of schooling to attain a sense of fulfillment in our increasingly competitive academic world.

Andrew is an avid conference speaker and staff development coach, and helps corporate leaders, professionals and entrepreneurs integrate work, life, and self-care in order to pursue purposeful living. Andrew has earned degrees from Southern Arkansas University, dual BSc in Medical Biology, Exercise Science, and a MSc, Master of Science. Andrew is a professionally certified educator, Professional Teacher PD facilitator, and a former teacher of the year. Andrew’s speech “Your Dream must be Bigger than your Chair”, is based on one of Andrew's soon to be released books in 2021. In this speech, Andrew will talk about how anyone can overcome hardships in their lives and become the best version of themselves that they can. He will talk about how his mother left him at 6 years old to pursue a better future for him and his 5 siblings, as well as the challenges and difficulties he had endured growing up as a child in foster care in Jamaica with limited access to a formal education.

Anisa Ali is a grade 9 student at Iroquois Ridge High School. She decided to join public speaking at TEDx as a passionate innovator to inspire others to live the life that they want and become the best version of themselves. She loves to write poetry and stories in her free time, and two of her poems and short stories have been published in a PolarExpressions issue and one of her poems won first place in the Eden Mills poetry competition. Anisa also enjoys making origami and drawing portraits as a pastime. Her TEDxIroquoisRidgeHS talk, Living the Life you Want, will engage on how we can elevate our happiness by following our own dreams and passions through three steps: finding our own definition of success, strengthening our self esteem and surrounding ourselves with supportive people. In today's world, the pressure of society can force us to live in a way that we're not happy with, but by identifying what is important to us and what we truly want in our lives, that can be prevented.

Caroline Huang is a Grade 10 student at Abbey Park High School. After becoming an apprentice for two phenomenal female founders in two contrasting fields, she gained invaluable experience and inspiration to become a budding entrepreneur. She is one of a thousand achieved highschool students worldwide accepted to the New York Academy of Sciences, where she collaborated with an international community of diverse backgrounds. Caroline's TEDxIroquoisRidgeHS talk asks, "What can we learn from biomimetic lifestyles?" and provides untraditional insights towards sustainable living. Biomimicry originates from the two words' life' and 'imitate,' and at its core, is about valuing nature for what can be learned, not extracted, harvested, or domesticated. Caroline discusses interweaving contemporary biomimetic design-principles, the metaphorical genius of evolution, and mindfulness of Indigenous teachings, to combat the latest problems of the century with nature rather than against it.

Chloe is a creative and outspoken Grade 11 at Iroquois Ridge! She has a wide range of interests including biology, graphic design and jewelry making, but one that she holds especially close to her heart is her passion for climate activism. Since learning about the impact of plastic waste she has made changes in her life and others with her school-wide petition and Instagram ‘green’ challenge last year! Chloe has always had a passion for public speaking and knew she had to take advantage of this opportunity to speak out about the plastic crisis and inspire others. Chloe's TEDxIroquoisRidgeHS speech demystifies the plastic crisis and connects it to climate change through easy to understand bundles of facts and real-life examples. She explains why action is lacking and how we as individuals form a strong force that can save Earth before the worst consequences occur. Her speech offers encouragement and courses of action so that anyone can reduce their negative impact on our planet.

Emma is a Grade 9 student activist at White Oaks Secondary School. She decided to participate in TEDx because she loves sharing her ideas and hopes to help people grow. After winning an award for writing in fourth grade, Emma has fallen in love with the art of writing as well as reading. Throughout her life, Emma has won multiple public speaking awards in three different languages. She also loves running, baking and kickboxing. Emma's speech is entitled the Power of Failure. She will explain the science behind failure and factors that influence failure including the concept of perfection. She will also take us through some barriers of success and offer some personal solutions.

Jasmine is currently a grade 11 student who goes to St.Robert Catholic High School, she is a cheerful and extroverted individual who loves to interact and meet with new people! Outside of school, she is a passionate advocate for mental health, and often helps around her school or community to promote this issue and spread awareness. Through TEDxIroquoisRidgeHS, Jasmine hopes to help connect with other students who struggled mentally in the ongoing pandemic, and to help them understand that they’re not alone, through speaking about some of her personal experiences from the past year. Jasmine’s TEDxIroquoisRidgeHS speech is titled “Hobbies: Life’s Beauty Filter”, and focuses on the importance of hobbies in our everyday lives. As many of us grow older, we slowly begin to abandon our hobbies for things such as school or work. Jasmine is here today to speak of why hobbies are so important to us, and encourage everyone to ignite their former and future passions.

Mona Haider is a grade 12 student at Iroquois Ridge High School. An avid musician, she has appeared in many singing competitions and has progressed to both the regional and national level. To enrich her performance skills further, she has taken up public speaking, which brought her to the TEDx stage. She is passionate about the importance of languages, speaking four languages herself, and is hoping to pursue a post-secondary degree in linguistics, and spends her summers volunteering at a French and English children’s summer camp. At TEDxIroquoisRidgeHS, she will be speaking about how a rise in technological advancements has caused a decline in humanity. She believes that elevation should be measured by the improvement of individuals instead of just the improvement of our inventions. As someone who grew up in the technological era, Mona will be sharing her first-hand experiences with how technology has prevented herself and many others from becoming the best version of themselves.

Neha Gupta is a Grade 11 IB science enthusiast and social innovator at Westdale Secondary School in Hamilton. Her genuine love for sharing ideas and learning from stories brought her to the TEDxIroquoisRidgeHS stage. Neha has a love for competitive sports, and enjoys working with her community around equity-based action. Aside from wanting to pursue the medical sciences, she hopes to empower one person at a time through public speaking on various platforms. At TEDxIroquoisRidgeHS, Neha will speak on the importance of youth unity, taking advantage of voice and having the courage to believe we can catalyze change. She stresses that realizing power and possibility give us the tools to work towards a movement bigger than ourselves. She ultimately hopes to motivate youth to inspire others so we can empower each other towards becoming global citizens.

Rayan Magon is a Student Researcher, Innovator, and a Pearson Scholar at the University of Toronto. Rayan's interest in Society and Psychology has been ever standing and the process of researching that involved -ideating, questioning and creating always appealed to her. In grade 12, Rayan took the first step towards realizing her research interests and developed a board game to reduce gender-based implicit biases. With this, Rayan represented India at the Intel International Science and Engineering Fair in 2019. Since then, Rayan has continued to engage in expanding her research interests and she is very passionate about Social Cognition and development. Rayan's speech is about "Carving your own path using Mindful Imagination". In Rayan's talk, she will be talking about the process of creating one's own path by integrating mindfulness with Imagination, and how we can shape our future by focusing on the present. 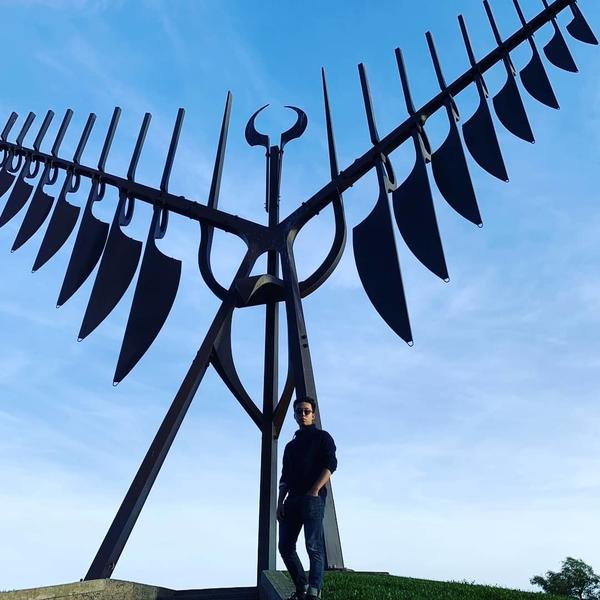 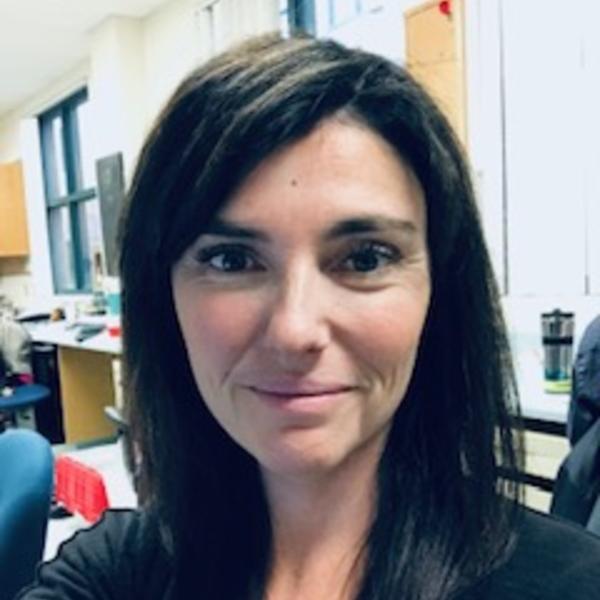