Theme: What Comes After

You humans are the apex of the species.
You keep learning, exploring, inventing, and developing, so you can’t escape the inevitable fact that you are in continuous evolution.
This technological evolution is a double-edged sword, it may help you to make a better future free of wars, diseases, environmental pollution, and starvation or it may be the end of your mankind and replace you with new species.

So,
What is your fate?

Ahmed is an electronics engineer, started his career working in Industrial Automation on Rockwell and Allen Bradley technologies, working on mega multi-million dollar projects within the Multinational and governmental sectors. Ahmed then worked in the field of executive coaching and training before moving to one of the leading technology vendors, Oracle, as a Territory Manager for Lebanon, handling their Infrastructure and Platform technology clusters. While working in the technology sector, it was evident the gap in the data market, in terms of talents, design, and technology. For that matter, Ahmed started his own digital transformation consulting practice, that evolved into Synapse Analytics a company specialized in enabling businesses, organizations, and governments to adopt Artificial intelligence to transform and scale their operations.

Chairperson and Professor of Computer Science and Engineering at Egypt-Japan University of Science and Technology.

He was Research Associate at the Advanced Processing Technologies Group, Department of Computer Science at the University of Manchester where he also got his Ph.D. Dr.Ahmed worked on numerous projects which some of them are; Analytical modeling for the high-performance cloud (Amazon Grant), Large scale dynamic programming on GPUs (IBM Grant), and Face recognition on embedded platforms using mobile GPUs (ITAC Grant). He established Alexandrina CoderDojo with Bibliotheca Alexandrina (Dojo Champion) in 2017 and co-founder of BlinkApp company that uses technology to save lives by monitoring drivers’ behaviors and sending out notifications to emergency services which won the first position at the MIT Arab Startup Competition in 2017 and the Arab Mobile Challenge 2016 Award for it.

Student at The Faculty of Engineering - Alexandria University

Ahmed participated in many volunteer work, he was an organizer in the Confederation of African Football (CAF) 2019 and delegate at Alexandria Model of European Union’19. Besides the volunteer work, Ahmed reached the final stage at Intel ISEF and won seventh place in Upper Egypt in the Marathon for walking, and 16th place in the Karate competition at the level of Egypt as well.

Amr Ramadan is considered one of the most influential activists in the field of Scholarships, studying abroad and the preparation for international exams Such as TOEFL, IELTS, SAT, and OET. He started the journey of Scholarships at a very young age when he was 13 years old as he got accepted into a US department program called Access to study English language and American culture for two years with American teachers in Amideast from 2009 to 2011. Amr worked as a scholarship consultant in marj3.com. He is also the founder of California Activity club conducting English conversation workshops sponsored by The U.S Consulate General Alexandria.

Ibrahim is the Head of Artificial Intelligence and Analytics in Ericsson Middle East & Africa. He is responsible for the development, sales, and delivery team working on Ericsson’s Artificial Intelligence and Analytics solution portfolio in more than 70 countries. Ibrahim has extensive global experience, where he has worked in Europe, Asia, Africa & Middle East in different leadership capacities in countries like UAE, Thailand, Georgia, and Sudan to name a few

Malak is one the people who love music and supported her love with training, so she trained for two years and took many singing courses, and all of this helped her being a member of the Opera House in Alexandria Malak's love for singing continued to drive her and she won many awards and participated in many competitions.

Maryam Ahmed is one of the bloggers that always appears with beautiful and innovative videos, but these videos have a long journey behind it. Maryam is a graduate of the faculty of mass communication - Cairo University took every opportunity to try many fields. She worked as a freelance voiceover, creative director, content creator, and she is a volunteer at Baheya Foundation.

Student at The Faculty of Pharmacy - Alexandria University

Nourhan Ahmed Hamouda is a second-year student at faculty of pharmacy Alexandria university, she is also an activist in the volunteering field as she is one of the first students to volunteer in the academic committee at Access To Progress (ATP) and she attended some medical projects like Save project

Osama is one of the people who follow their passion, and his Passion for Web Techniques led him to have experience in many technical fields up till he founded the well-known youtube channel "Elzero Web School". He also founded "أكاديمية الزيرو" website which has many technical courses in all fields of web and programming (HTML, HTML5, CSS, CSS3, JavaScript, PHP, Python, etc..).

Reem Began studying music at the age of 3 at the Conservatoire - Alexandria, where she studied violin, then obtained her diploma in 2018. A student at the Faculty of Engineering, Alexandria University, Department of Chemical Engineering, 2nd Division. Joined the Suzuki Violin School at the Arts Center of the Library of Alexandria since its inception in 2003, and the Bibliotheca Alexandrina Children's Orchestra since its inception then joined the Alexandria Library Amateur Youth Orchestra in 2014 in which she participated in many concerts and festivals in Alexandria and Cairo. She also performed as a soloist in many concerts in the cultural centers in Alexandria, with the Alexandria Library Youth Orchestra and with the Alexandria University team.

Student at The Faculty of Medicine - Alexandria University

Sarah Alaa a student at the Faculty of Medicine who volunteered to run the academic committee in both the CNS conference and the Ebb project.

Youssef is famous for his distinctive comic character and his capability for creating laughter. He presented more than 30 stand-up comedy shows and made 300 videos and these videos achieved millions of views, they were shown on popular television programs and he participated in many television interviews and theater shows. 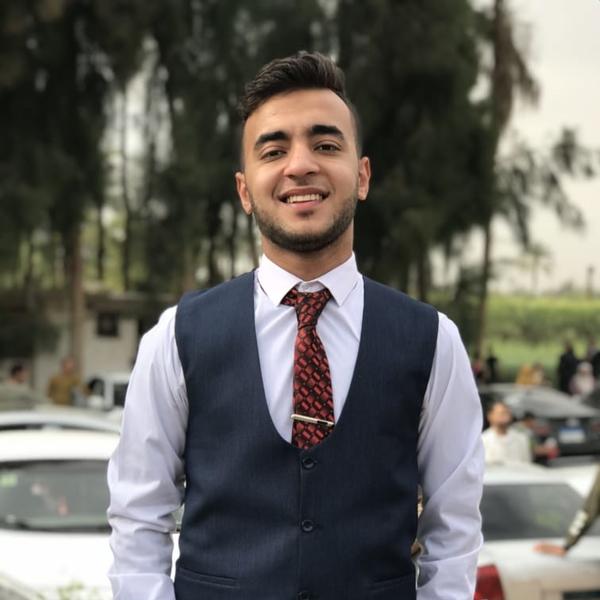