This is our 2020 call to action driven by the belief that we are facing a global crisis. This has been building up for decades and resulted in dramatic climatic events, unfolding on front of our eyes well beyond climate change into every aspect of our lives: Australian bush fires, melting of glacier ice caps, droughts, rapidly rising of ocean temperatures, extreme weather events, hostile working environments, and war resulting in millions of displaced families seeking shelter.

We are pressing the REBOOT button on our planet within our lifetime, bringing together a series of experts across multiple disciplines who pursue to outline a new and innovative approach to living.

Using state of the art technologies, we dream of building a world in which our homes, lives and planet awareness are smarter, and we aim at shaping a new blueprint for cherishing this Earth. It’s a conversation, it’s our effort to illustrate how we can live, as opposed to how we do live.

Join us. Join our conversation and help us REBOOT the planet in April 2021.

Agustín Delgado (Spain, 1972) holds a PhD in Industrial Engineering. (Higher School of Industrial Engineers of the Pontifical University of Comillas (ICAI) and National University of Distance Education (UNED) with over twenty years of experience. He began his career in different companies in the railway and energy sectors. He joined Iberdrola in 2006 as Director of Innovation and Sustainability where he is also responsible for the venture capital program (PERSEO). He has been a consultant in different companies and technology funds, among which Gamesa or the Neotec Fund (Spanish Investment Program in Risk Capital) stands out. He is also a prominent member of the World Economic Forum (Davos Forum), where he is a member of its world council of energy technology experts, and the Center for Low Carbon Energy at MIT (Massachusetts Institute of Technology).

He is Honorary President of the Garrigues Law Firm and President of the Garrigues Foundation, Doctor Honoris Causa from the University of Buenos Aires in Argentina, European University of Madrid, Ramón Llull University in Barcelona, Pontifical University of Comillas in Madrid, and Catholic University in Colombia. He has been part of other companies as president and advisor. He is President of Honor of Spain with UNHCR (United Nations High Commissioner for Refugees), Founder of the Spanish Chapter of Transparency International (TI) and Patron of the José Ortega y Gasset-Gregorio Marañón Foundation. He was appointed World Advocate for the Center for World Peace through Law as Honorary Member of the American Bar Association and Honorary President and Patron of the APD (Association for the Advancement of Management), of the Spanish-Chinese Council Foundation, Honorary Patron of the Spanish Council Foundations - Japan; - United States; and Australia.

He is a Senior Industrial Engineer at ICAI, executive coach and team coach graduated from the European School of Coaching. He has been trained as a program manager at IESE and has a Master's degree in Strategic Management of Human Resources from the Complutense University of Madrid. Has held positions of responsibility within the field of Human Resources in large Spanish companies and has led international projects related to people management in countries such as Nigeria, Albania, Ecuador, Peru or Bolivia. Director and program coordinator Master and reference professor at various universities for subjects related to people management, competencies and human resources. His passion is teaching and enjoys teaching training and consulting programs related to competencies, leadership, coaching, negotiation, employability and human resources. He has published the book “The Spy of the Mind”.

Spanish entrepreneur and director, recognised as an expert in Big Data, Artificial Intelligence and Technological Innovation, with more than 25 years of experience in the technology sector. In 2006 co-founded Synergic Partners, a European big data pioneer that was acquired by Telefonica in late 2015, where continued as CEO until the company's full integration into the group at the end of 2018. From 2019 until his appointment as Secretary of State, he has been dedicated to high-level strategic advice on international business councils. Named by Stanford University as Ambassador “Women in Data Science (WIDS).” It has been recognized by the North American business magazine “Insight Success” as the only Spanish among the 30 most influential and internationally recognized directors. She is among the world's first women in the data business and is willing to change things from the public sector to make Spain take its rightful place in technological change and digital transition.

A graduate in Physiotherapy, Elena Garcia also holds a PhD in Medicine from the University of Alcalá, as well as a teaching and research scientist in health sciences. In 2014 he joined the San Juan de Dios Foundation, with the work of promotion and management of innovation and research, in the areas of chronicity, disability, mental health and social exclusion, promoting the design of projects centered on the user, with technological base and social impact, from a systemic approach. Since then, he has been leading projects in artificial intelligence, telemedicine application development, digital project management tools and product design based on frugal innovation.

Considered one of the most brilliant Spanish pianists and composers of his generation, he has been awarded in numerous international competitions (Santander Paloma O’Shea, María Canals, Palm Beach -USA-, Pilar Bayona, Jaén Prize, Viña del Mar -Chile-, among others). He has also been honored with such significant awards as the “Mont Blanc” for culture in the Canary Islands in 1991, “Casino de Tenerife” in 1990 and the “Harold Bauer Award” at the Manhattan School of Music in New York. Gustavo Diaz-Jerez regularly performs in auditoriums around the world. His tours have led him to play in important halls such as Alice Tully Hall, Carnegie Hall in New York, Royal Festival Hall in London, or Beijing University in China, in addition to the main auditoriums in Spain.

Inés Bebea González is a telecommunications engineer, a master's degree in educational innovation and a social theater actress. She is also the founder of undula, a non-profit association, which is aimed at promoting critical thinking in the use of digital technologies, applying the potential of artistic creation to understand and transform the world... also in the technological field. Currently, he gives informative talks, courses and workshops, and accompanies social entities in digitization processes consistent with their social and ethical values.

Juan Francisco calero is a motor journalist and creator of content focus on motor products since 2001. Catalan of birth and formation, and based in Madrid. He holds a Bachelor of Arts in Journalism (UAB Barcelona) and a Master of Science, Technology and Environmental Communication (UC3M Madrid). He has received several awards and scholarships in this time for his work to promote innovative companies. He has created five audiovisual, technological and engine companies, some of them successfully. He was director of Revenue Technique Automobile in Spain for many years. It took 12 years to get their car program done in Canal+, Motor 360. Then this program arrived later to DMAX. At T10, his current company, he creates and produces all kinds of content for and for the world of the engine.

He has a master's degree in Industrial Engineering (UAN) with an exchange in Finland (HAMK) and an MBA (IESE); developing his career working in organizations like UNICEF. Since 2019 he has been part of the payment media technology company Mastercard, where he works as Director of Relationship of Great Customers. His great passion since he has used reason is the art of magic (and in particular the branch of mentalism). He has had the opportunity to learn from the best magicians in the world (such as Juan Tamariz) and is part of the prestigious MWC (Magic Circle of Madrid) and the SEI (Spanish Society of Iluzionism). Over the past few years, Mariano has managed to combine his way of life (in the business world) and his great passion (illusionism) to offer inspiring talks to companies around the world, where in a way that is didactic and entertaining, it explains how we can use the power of magic to succeed in our day-to-day work.

Doctor of Psychology. Master's degree in Clinical Psychology and Master's degree in Legal and Forensic Psychology, as well as training in Management of Social Service Centers Currently teaching in Master and University classes, as well as extensive experience as teaching staff in other Public and Private Institutions since 2013. Member of the Academic Psychology Division – SEP and Coordinator of the COPAO Equality Commission. In addition, he has participated in the publication of chapters in three books and articles in high-impact journals. He advances his professional career with participation in courses, seminars and congresses at the national and international levels, contributing with his own research. He has published the book: Why You Love, based on the analysis of variables with which to analyze personal construction and its improvement, in the relational field. Extensive experience in private practice as an Individual and Group Psychologist.

International trend analyst for design, architecture, lifestyles and contemporary movements with a degree in Information Sciences from the Complutense University of Madrid. She specialises in the research of current new currents in all creative areas related to innovation, especially in the global scenarios of young people - new talents - and the evolution of international design. She collaborates with companies and institutions such as Simon, Cosentino, Poltrona Frau, Rimadesio, Citröen, Ministry of Culture, Interihotel, Hearst, among others. At the moment she teaches classes at Universities such as IE Design and Architecture, IADE, Polytechnic of Milan. Since September 2019, she has been Network Manager, Network of Spanish Design Industries writing regularly on Design in the Country, Condé Nast Traveler, ICON Design, AD España, ELLE Decoration, Lifestyle Design and Architecture Magazine of the Porcelanosa Group.

The performance included in this presentation is carried out by a working group linked to the Ondula Association and the Art Laboratory for the Social Transformation of the Metaphore Hall, made up of professionals in education and engineering, That today they are transformed into dancers and actresses to show us the fruit of a process of research and theatrical experimentation that has been carried out expressly for our participation in TEDxUnebrija Reboot. Moisés Mato collaborates in the artistic direction of the presentation and the group is formed by Garazi García Ortega, Andrea González de Arce, Miguel Ángel Chumo Mata, Yolanda Ramos Clap and Pilar Bebebea Zamorano. 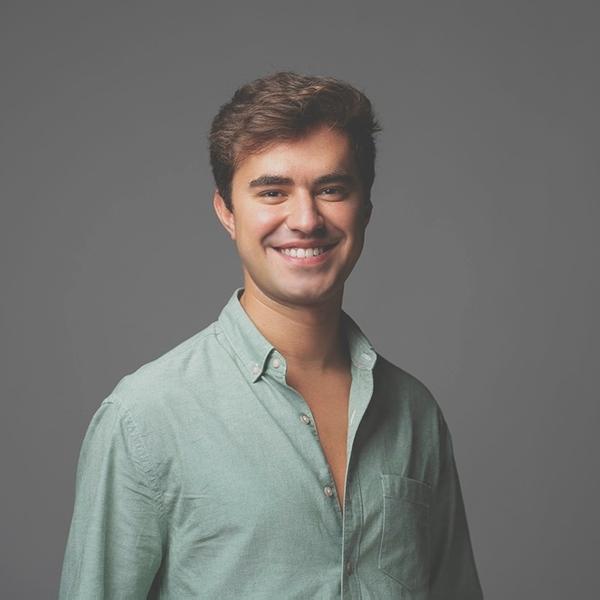