TEDxJamal is an independently organized licensed TEDx event, happening at Jamal, Kathmandu, Nepal on 26th February 2022. The theme for this session of TEDxJamal is Explore and Extract. Here in TED we believe, life is all about exploration. In almost every passing moment of life we are, in essence, wide-eyed curious explorers. You, for instance, are exploring TEDxJamal right now. But the catch is, only few of us are able to extract something from our daily explorations. Let’s talk about Sir Issac Newton. Of course people had explored or experienced the gravity prior to Newton, but is was him who seek to extract. If it was not him, one of the most important scientific discoveries would’ve never been surfaced. Humans have made virtually every idea and even fantasy come into reality through exploration and extraction. The invention of the Aeroplane was simply based on the extraction from the exploration of birds flying in the sky, while of the ship is rooted in the extraction from the exploration of fishes swimming in the water. Exploring and extracting need to be simultaneous. Once you explore, you ought to extract as it is extraction that leads to formation. Hence, exploring what’s hidden in the community and extracting what is needed for it is the theme of TEDxJamal.

Not all the people who explore ended up extracting, but whoever ended up extracting, their conclusion and creations are innovative enough to guide the entire human race. In this edition of TEDxJamal, get ready to witness the different instances of contemporary exploration and extraction within our own society.

A prominent figure in Nepal's eCommerce and the pillar of Nepal's pacing up the fate of the business, Amun Thapa is the Founder & CEO of Sastodeal- Online Shopping Platform. Starting 10 years ago as Nepal's first local eCommerce company, Sastodeal is now a brand that synonyms Nepal's eCommerce market. Adapting to the technological development over the decade, Mr. Thapa has guided the enthusiastic team of youths and adapted to the changes as required. Sastodeal has secured partnerships with prominent brands in the world of e-commerce including Flipkart and Myntra. Likewise, Sastodeal and the Government of Nepal - Food Management Division has teamed up for a cause. For his efforts in transforming the eCommerce industry in Nepal, he was awarded as " the person who has made a difference around the world," by the United Nations. At TEDxJamal, Mr. Thapa will be sharing his journey of exploration, extraction, and implementation that has led to a much-needed commercial change in Nepal.

Dan Bahadur Wright was born in the UK. Whilst completing a degree in the late 1990’s in Outdoor and Environmental Education he served the British Army Reserves in Liverpool for 4 years. Following this, Dan traveled and worked as an adventure guide and experiential education trainer in North America, the UK, the French Alps, India, Nepal and the Middle East. In 2017, Dan joined Chandragiri Hills Ltd. Dan works in a range of areas for Chandragiri including their adventure activities and natural history projects. Throughout the last 22 years of living in and out of Nepal, Dan has developed a deep love for the Nepali culture and for the innovation and pioneering spirit of the small start-ups and social entrepreneurs who are so abundant now. He has worked extensively mentoring these organizations and will be sharing his experiences in Nepal with us at TEDxJamal.

A structural engineer who raps steps into politics for a change we have always dreamt of! Er. Balen Shah is a Rapper/Music Composer/ Engineer! He has been doing Hip-hop music for more than 12 years now. From winning Raw Barz, Nepal's first Rap battle league, to being the judge of Nepal's first Hip-hop Reality TV show "Nephop Ko Shreepech" he has been engaging himself in music which is mostly about social issues, mental health, political satire, etc. Moreover, as a patriotic youth who desires a change that matters in Nepal, he has recently announced to run for Mayor of Kathmandu Metropolitan in the upcoming election. Er. Balen holds a Bachelor's degree in Civil Engineering and a Master's degree in Technology in Structural Engineering. His engineering skills have been exclusively used in Design, Construction, Supervision in all 7 states of Nepal. At TEDxJamal, he will be sharing his insights and ideas gained throughout his journey and how he implies those ideas in his inspiring journey.

Pawan Kumar Golyan ia a prominent figure in economy of Nepal who leads Golyan Group of Industries as the chairman. He started his career at the age of 16 and became a proficient business person by the age of 22. He has over 40 years of experience in the field of manufacturing, real estate development, financial services and renewable energy. He views agriculture as the asset of our country. He aims for the development of community and village by cultivating organic products in over 1000 acres of land. He views to complement the farmers rather than competing with them. Mr. Golyan has been working largely to provide good market to the farmers. In TEDxJamal 2020, he will be speaking about Agriculture in Nepal. He will be speaking about ideas and tricks to make Nepal a sustainable country in every aspect. Agriculture is the way to rise economy of the country, we should focus more into making our own asset more sustainable rather than diving into other things which lies far away from us.

Priyanka Karki is a leading face of Nepali movie industry who is known for her versatility and unstoppable nature. Former Miss Teen Priyanka, is also recognized as aspiring singer, VJ, model and dancer. Priyanka Karki began her career as a VJ in Kantipur television in 2005. She has a passion for dancing. She had a deep interest in the movie industry from her childhood. She holds a Bachelor degree in Film making from University of North Alabama. Priyanka made her debut into the Nepalese film industry through “3 Lovers “. Her debut in Kollywood was acclaimed by many people. In TEDxJamal, she will be talking about how the movie industry evolved from where she began to where she is how. Priyanka will also be sharing her journey so far in Kollywood.

Mr. Ram Laxman Rimal are twin innovators who aim to connect community through their community based innovation. Through their innovation, they aim to foster development of entire country. They are the pioneers in the field of creativity and innovation. Their major works include the creation of community siren, GPS tracking system in vehicles, earthquake and flood alerting system and many more. Nonetheless, their major work is electronic voting machine with touch screen panel having all level access even for less literate and visually impaired people. At TEDxJamal, they will be sharing their journey and experience in the field of innovation. Entrepreneurship in Nepal is mostly service-based. Ram Laxam will be sharing the importance of product- based entrepreneurship in the context of our country. They view that any problem can have practical solution, we should never stop to explore all the possibilities.

Shristi Singh Shrestha is an Animal and Environment rights activist, exploring and evolving every single day in the journey of leading as harmless life as possible. She believes that any idea or ideology is best transcribed not in words but through action. She studied Sociology and Anthropology which gave her different perspectives on how we have evolved as a culture and society. She was involved in different odd jobs from managing a medical college to working at a carbon trading firm, before she realized that her passion for art of dance, Yoga and fitness. Thus, she opened Core fitness studio along with two equally passionate women in 2011. At present, besides running the studio, she is associated with Animal Nepal and People’s Alliance for Nature- Nepal which was started by a group of like-minded individuals who were aware of and concerned for the environmental degradation and catastrophe around the world and specially in Nepal.

With over 2 decades of experience as a banker at international banks, Siddhant Raj Pandey headed for the challenge to establish Nepal's first onshore global private equity fund with its main focus on climate change. Prior to that, Mr. Pandey had led a development bank and started a Capital market subsidiary for bank in Nepal. For the past six years, he has been leading an incredible team under Business Oxygen (Bo2) which has invested in 16 SMEs that are compliant with ESG measures. Bo2 is Nepal’s first International Private Equity fund with a climate focus that mobilizes investments from IFC-The World Bank Group, Climate Investment Funds, and the FCDO. He is enhancing innovation, growth, and competitiveness of agribusiness in Nepal as the chairman of the Board of Directors at the Nepal Agriculture Incubation Centre under the Ministry of Agriculture. At TEDxJamal, he will be speaking about his insights that bridges innovation, investment, and business with the current need of the era.

Dr. Sushil Kandel is a licensed psychologist. He holds a PhD degree in perception visualization from Bangkok University. He has specialized in perception visualization of human brain. He is just the second person in the world to get a PhD degree in perception visualization which is a glory in itself and has made him closer to his dream. Dr. Kandel is currently working as the director of National Program Centre that focuses on mental health awareness for school children. At TEDxJamal, he will be illustrating about mental health situation in Nepal. He will also be talking about ways to look forward overall health and development of the country with the parallel way of mental as well as physical health. Dr Sushil Kandel will enlighten us about the importance of mental health for overall well being. 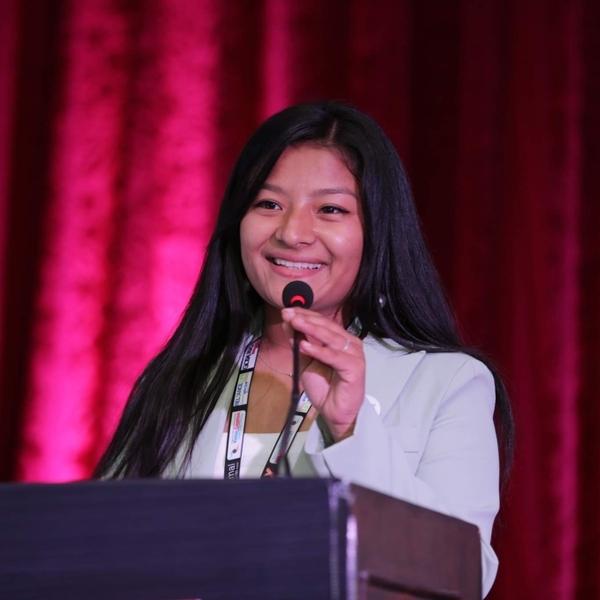 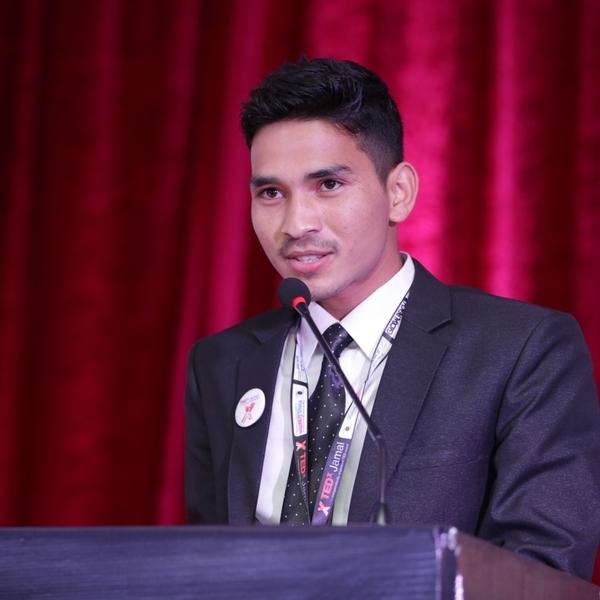