Theme: The Mission of Mavericks 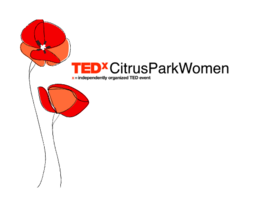 TEDxCitrusParkWomen is a one-day event celebrating the mission of female change-makers and revolutionary thinkers.

The program will consist of an incredible all-female line up of speakers.

Prepare to be: Amazed, Inspired, and Uplifted!

Aman K. Batra is a nationally touring Indian-American poet from Artesia, CA. She graduated from UCLA with a BA in Creative Writing, and is currently obtaining her MFA in poetry at Antioch University. She is a National Poetry Slam finalist, a member of the 2016 and 2017 Hollywood Slam Team, and a teaching artist in Los Angeles and Long Beach county. She is currently signed to Neon Entertainment Talent Agency, where she performs 50 minute keynotes and conducts workshops at colleges, universities, and venues across the country. Aman’s poetry is heavily tied to her work as an educator, activist, and intersectional feminist. Her work has been featured on All Def Poetry, Button Poetry, Vibe, BeSe, and The Huffington Post. She has been published in The Los Angeles Press, LA County Arts Commission, and Fight Evil With Poetry Anthology. Aman's first chapbook collection "Stolen Thing" and "Dripping Love" are available for purchase on her website.

Amber Kazalbash is a digital strategist and content creator based in Austin, Texas. She focuses on using her background in Social and Product to find harmony between tech and creative and build more human brands. Born and raised in Southern California, Amber earned a MS in Digital/Social Media and Product from USC and a BA in Public Relations and Spanish from CSU Fullerton. She has worked with brands across the retail, fashion, and tech industries, most recently as a social strategist for Microsoft at the Ayzenberg Group in Los Angeles. Amber serves as the Director of Marketing for Muslim Women Professionals, a non-profit which promotes inclusion and empowerment for professional Muslimahs in the US.

Ellie Shoja is an award-winning Writer, Producer, and Motivational Speaker. She is the host of the Unleash Your Peace podcast and the founder of Peace Unleashed, a personal transformation company that focuses on helping individuals and groups level up holistically.

Jenny is the founder of Mind Brain Parenting and creator of award-winning life skills games, 52 Essential Conversations and 52 Essential Relationships. Her games have been featured by Harvard University, won the 2018 Parents' Choice Awards, and are used by parents, teachers, and therapists in 43 countries. Jenny dedicates her research and career to helping people realize their potentials from classrooms to boardrooms. She has worked in adult development as a human capital consultant and executive coach; in emerging adulthood development as an MBA career coach and instructor at UC Berkeley; and in childhood development as a Montessori school administrator. She currently conducts research in social and emotional learning at UC Irvine. She received her M.Ed. from Harvard Graduate School of Education and MBA from UC Berkeley. She resides in Orange County with her husband and three children.

As a single mom on a mission to remove the negative stigma surrounding mothers in the workplace and evolve companies, Katrina started The Working Mother - a human resources consulting firm. She has played a key role in consulting several businesses from start-up to successful exits by supporting the essential functions of leadership, key personnel recruitment, employment infrastructure, and cutting costs. After 2 years in business, Katrina joined like-minded investors to form EVA8 to expand her vision of creating a productive, healthy, and safe workplace for all by educating employers, implementing processes to grow these employers, and finally matching employers with talent with shared passions. In EVA8's first year of business, Katrina was nominated as CEO of the Year by LA Business Journal and a U35 Visionary Women member.

Before launching her one-woman event planning business in 2016, Khanh pursued multiple career paths simultaneously, ultimately discovering her sweet spot as a fiercely dedicated wedding guru—a Master of Ceremonies, coordinator, the bride whisperer, & unofficial bridesmaid all in one. With every event she produces & story she tells, Khanh is dynamic, welcoming, & deeply committed to forming genuine relationships with her clients—all of which have become the hallmarks of her business and brand. Her recipe for success comes from transforming the simplest concepts into awe-inspiring affair, incorporating artistry & culture into the execution, & translating stories into magical experiences. Today, her craft has taken her to spectacular destinations & the most sophisticated soirees across the country & on three different continents. Known for her five-senses approach, what you smell, touch, taste, see and hear are carefully orchestrated to create the best reception party of your life.

Hip Hop Media Personality, Letty Peniche first made a name for herself in LA radio. With checks on her resume that include co-hosting Big Boy’s Neighborhood on Power 106 & holding down nights on Real 923, Letty has stood out as one of thee go-to hip hop heads in Los Angeles. Having also served as Dreamville’s social media correspondent while the team traveled the globe for the roll out of J. Cole’s 2014 Forest Hills Drive album and having provided Spanish radio vocals on Lupe Fiasco’s 2018 DROGAS WAVE, artists trust Letty to help tell their story. This mother of 3, and her husband Jorge Peniche, have also focused their recent efforts on issues affecting their Latino community, setting up The Peniche Foundation which facilitates donations and visits with migrant children separated from their families at the border. By any and all means, Letty, is a force.

Monica Mo is the founder and CEO of WellSeek, an online community platform on a mission to dispel myths and spread truth in the health and wellness world. What began as a passion for science led to Monica’s realization that her own behaviors contradicted her knowledge, inspiring the conception of WellSeek to guide others on their own path of health and happiness. Monica began her career in science and biotechnology specializing in genome-based metabolic engineering and data analytics, and was a member of the academic teams which pioneered the "Google map of human metabolism", featured in TIME, CNET and CNN. As an industry scientist, she led early-stage R&D initiatives focused on metabolic systems engineering, cancer therapeutic design, and biologics production. Monica holds her Ph.D. M.S., and B.S. in Bioengineering from the University of California, San Diego.

Neloo Naderi: Mystic. Explorer. Empath. Neloo's commitment to living the TRUTH is unwavering. As host of The Daily Neloo, co-host of the Unleash Your Peace Podcast, and President + COO of Peace Unleashed, a personal transformation company, Neloo is honored to serve as a mirror for those who cross her path, reminding them of their true nature, divine energy, here to LOVE, EXPERIENCE, and EXPAND.

Nia Peeples is an actress, singer, dancer, host and author most known for the hit TV series Fame, Walker Texas Ranger, and Pretty Little Liars, as well as the movies The North Shore and Return to Lonesome Dove, and her #1 record, Trouble. She has hosted shows for MTV and E! as well as the Emmy award-winning, Teen Scene. Most recently, with her youngest child heading off to college and her fourth marriage ending, Nia sold everything she had and went on a 3 year walkabout to simply answer the question, “What do you want?” She knew that contained within that answer, the real answer, the answer that can not be separated from her purest essence, was the truth of who she had become and her greatest expression of that knowing.

Rachel Slawson is the reigning Miss Park City USA, Improv Comedian, and Actor. She serves as an advocate for the American Foundation for Suicide Prevention, and a Crisis Counselor for Crisis Text Line. Rachel shares about her own experience overcoming suicidal ideation, and Bipolar Disorder, through radical self care and emotional responsibility. She shine a light on mental health stigmas, and encourages women to be their own hero.

Ruthie Bolton is one of the most accomplished female athletes in the world. She is a 2-time Olympic Gold Medalist, a USA Basketball Female of the Year, the Sports Illustrated Best Woman Athlete by home state, and one of only 4 players to be named to the Women’s Basketball Hall of Fame Class of 2011. Respected around the globe not only for her skills on the court but for motivating, energizing, and engaging audiences, drawing on her rich life experience: as a former professional basketball player, author, educator and lifelong advocate for women.

In 2018, Ryann Richardson made history, becoming the 50th Anniversary Miss Black America. Before that, the tech marketer-turned-founder and Diversity & Inclusion advocate spent 10 years building brands and culture for companies spanning early-stage startups (Victor) to billion-dollar "unicorns" (Uber) to the Fortune 500 (T-Mobile/Deutsche Telekom). Her work earned her a spot as the youngest honoree on Savoy Magazine’s list of Most Influential Black Executives in Corporate America, and set her on the path to discovering her unique purpose as a champion for underrepresented voices. Now, in her second act as a founder, her company Ellington Lafayette Co. is building a new type of tech incubator, focusing exclusively on startups that drive social equity for women and communities of color. Ryann travels the US as a Keynote Speaker giving talks “Authenticity and Assimilation”, “Taking Up Space as Women and POC” and “The Politics of Race, Beauty, and Power.”

Born in Vietnam and raised in Southern California, after her family fled Vietnam as war refugees, Van watched her parents pave a new life for themselves. She saw first hand how creative thinking, innovation, and resilience can help people overcome their circumstances. She studied Psychology at the University of California, Santa Barbara and earned her MBA from Pepperdine University. She now uses those childhood lessons and over 15 years of corporate and start-up experience to rewrite the way we apply creativity in the workplace, instilling brave thinking in clients who are willing to disrupt traditional training methods. Her clients include gamechangers such as Google, LinkedIn, and MeUndies.