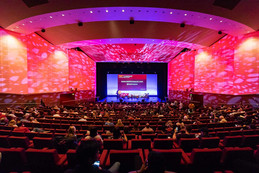 Bobby Duffy is Professor of Public Policy and Director of the Policy Institute at the King’s College London. Formerly Global Director of the Ipsos Social Research Institute, he has worked across most public policy areas in his career, and has also been a part of the Prime Minister’s Strategy Unit and the Centre for Analysis of Social Exclusion (CASE) at the LSE. His first book, The Perils of Perception, was published by Atlantic books in 2018 and drew on a unique set of global studies on how people misperceive things like immigration levels, crime rates, obesity levels and many more key social realities. Bobby’s new book, Why We’re Wrong about Nearly Everything, will be out this November.

Frank Cottrell-Boyce is a children’s writer whose first novel, Millions, won the Carnegie Medal in 2004 awarded to the best children’s book of the year. His short novel, Unforgotten Coat, won the 2012 Guardian Fiction Prize. His latest book is Runaway Robot published earlier this year. The film version of Millions was directed by Danny Boyle. Danny and Frank collaborated again on creating the Opening Ceremony for the 2012 London Summer Olympics which has been widely recognised as one of the best Opening Ceremonies ever. Frank has also written the scripts for many films, including 24 Hour Party People and the recent Sometimes Always Never. Frank was born and raised in the Rainhill area of Liverpool. In 2012, Frank was named the first-ever Professor of Reading & Communication at Liverpool Hope University, a position he continues to hold today.

Jackie Bell is a Senior Teaching Fellow at Imperial College London and an Honorary Fellow of the University of Liverpool Mathematics Department. A Scouser born and bred, Jackie is proud of her heritage and is passionately dedicated to raising the aspirations of children and adults from backgrounds similar to her own, challenging negative preconceptions and changing young people’s beliefs that higher education and careers in STEM aren’t for them. Her ultimate dream is to follow in the footsteps of Helen Sharman and Tim Peake in becoming Britain’s next astronaut – and more specifically – the first Scouser in space! Jackie’s passion for space exploration led her to became one of twelve finalists to take part in the BBC science production ‘Astronauts: Do You Have What It Takes?’. Following filming, Jackie has continued to work towards her dream of becoming an astronaut, learning to speak Russian and fly helicopters in her spare time.

Jane Davis is the Founder of The Reader, a Liverpool-based charity that has pioneered the use of Shared Reading to improve wellbeing, reduce social isolation and build resilience in diverse communities across the UK and beyond. Responding to a challenging upbringing, Jane took refuge in reading. Her passion for literature had been instrumental in helping turn her life around and inspired Jane to create The Reader. The organisation seeks to create a Reading Revolution to get great literature into the hands of people who need it. Thanks to the support of 1,000 volunteers and a range of partners, there are now over 500 Shared Reading groups that take place each week in care homes, hospitals, prisons, mental health settings, libraries, recovery centres, schools across the UK. In 2013, The Reader charity became the custodians of the Mansion House. After raising £5m for restoration the building reopens in September 2019 and will become home to the International Centre for Shared Reading.

Laura Nolan has been a software engineer in industry for over 15 years, including over five years at Google. She was one of the (many) signatories of the “cancel Maven” open letter, which called for Google to cancel its involvement in the US DoD’s project to use artificial intelligence technology to analyse drone surveillance footage. She campaigned within Google against Project Maven, before leaving the company in protest against it in 2018 and joining the International Committee for Robot Arms Control (ICRAC). She is also a member of Tech Inquiry, a non-profit organisation that aims to give technologists a voice in policymaking. Laura holds an MSc in Advanced Software Engineering from University College and a BA(Mod) in Computer Science from Trinity College Dublin. Laura is also a contributor to two best-selling technology books (“Seeking SRE” and “Site Reliability Engineering”, both published by O’Reilly), and writes a regular column for USENIX ;login: magazine.

Nessa Carey is an expert in genetics. She’s written Hacking the Code of Life, Junk DNA and The Epigenetics Revolution. She’s formerly a Senior Lecturer in Molecular Biology at Imperial College and currently serves there as Visiting Professor. Nessa holds has a virology PhD from Edinburgh University, a degree in immunology and did post-doc research in human genetics. In addition to her academic and writing experience, Nessa spent 13 years in industry working in drug discovery with senior science roles at startup companies all the way up to behemoths such as Pfizer.

Dr Paul Redmond is the Director of Student Experience and Enhancement at the University of Liverpool and one of the UK’s leading experts on generational change and the future of work. In Liverpool and around the world, Paul helps organisations and professionals acquire the skills and knowledge to thrive in today’s multi-generational workplace. Over his career, he’s helped guide the careers of thousands of students and graduates. Paul is the author of numerous books, reports and studies, including the best-selling, The Graduate Jobs Formula: How to Land Your Dream Career, and is currently working on his new book, The Rise of the Zombie Jobs’, which will reveal Paul’s forecasts on the jobs and careers that are most likely to be lost to AI and robotics – and those that (for now) are likely to be safe.

Pete Trainor is a man on a mission to bring design, data, AI and technology together to empower humans to be happier and more successful. Pete is the bestselling author of Human-Focused Digital and founder of a London-based Artificial Intelligence firm focused on developing ground-breaking applications to make the world a radically better place. He has a very simple philosophy: Don’t do things better, do better things.

In June 2017, after an illustrious international career, Peter Moore returned to his hometown to become the Chief Executive of Liverpool Football Club. Peter is responsible for all business, commercial and operational areas of the Club reporting directly to the owners, Fenway Sports Group, who also own the Boston Red Sox. Peter’s career before LFC was spent at the highest ranks of video games, entertainment and consumer products. He EA’s (Electronic Arts) Competitive Gaming Division where he brought to life new global competitions for some of EA’s biggest brands including FIFA, Madden NFL and Battlefield. Prior to that Peter served as Chief Operating Officer of EA and President of EA Sports. Prior to EA, Peter was Corporate VP of the Microsoft Xbox business, President & COO of SEGA America and Senior VP of Marketing at Reebok International Ltd. He also serves as VP of SpecialEffect, a nonprofit that uses technology to enhance the quality of life of people with physical disabilities.

Singer & songwriter Rebecca Ferguson shot to fame in 2010 as part of the seventh series of The X Factor. Mentored on the show by Cheryl Cole who was assisted by will.i.am, Rebecca outduelled One Direction among many others to become the series finalist. Propelled by her newfound popularity she went on to enjoy critical and commercial success with four consecutive Top 10 albums. She’s been with Simon Cowell’s record label Syco as well as Epic and Columbia Records. In 2018, the Guardian named Rebecca to its list of all-time greatest X Factor finalists. Rebecca was born in Liverpool growing up in Huyton, Woolton Village and Anfield during her youth.

In this age of busyness and cyber distraction, it’s rare for people to take the time to learn, improve and perfect their craft – let alone having more than one. Robert Twigger in an exception, a true polymath who has written novels, poetry, has taught English abroad while learning martial arts, and has been on crazy expeditions all over the world. He’s the author of 13 books, including his 2017 ‘Micromastery’, a guide on how to become fast learners, spot creative opportunities and ultimately boost our happiness.

Stephen Bayley has enjoyed a long career as one of the UK’s most influential voices in design. His books and journalism have, over forty years, changed the way the world thinks about design. In fact, the legendary author Tom Wolfe described him by saying “I don’t know anybody with more interesting observations about style, taste and contemporary design”. Stephen was born in Cardiff, 13th October, 1951 and educated at Manchester University and the Liverpool University School of Architecture. His work with Terence Conran on the Boilerhouse Project at the Victoria & Albert Museum in London went on to become the most successful exhibition space of the 1980’s. Their success at the V&A led directly to the eventual creation of the Design Museum in London of which Stephen was the founding CEO. Stephen is the author of 22 books including Taste and Liverpool: Shaping the City. His latest book, How to Steal Fire, was published in 2019 and co-authored with former Conran CEO Roger Mavity.

Standing at a modest 3’6″, Tanyalee Davis’ physical height hides a towering personality and onstage presence. With a comedy career spanning nearly 30 years Tanyalee has performed all over the world. She premiered her first one-woman show in 2007 at the Edinburgh Fringe entitled “Little Do They Know” which went onto garner 4-star reviews. Based on the success of her Fringe show, she enjoyed an extended run in the Las Vegas Strip performing her “One Woman Show”. In 2019 Tanyalee remains at the top of her craft and will be performing in 10 countries over the next year with gigs in Las Vegas, Dubai, Edinburgh, Antwerp. Aside from her standup comedy, Tanyalee serves on the Board of Directors of GR8 AS U R, which is an anti-bullying/kindness campaign. She also heads up the #ScootergirlCampaign where she advocates for better treatment for disabled people using public transport in the UK. Originally from Thunder Bay, Ontario in Canada, Tanyalee now makes her home in the United Kingdom.