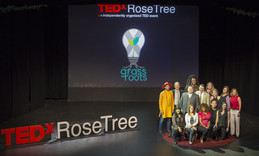 The theme of Grassroots showcases how every idea starts as a small concept, and requires some level of incubation and nurture. While the term grassroots often has a political connotation, it really embraces all ideas that grow when they involve their community. Because Media has long supported the tenets of this kind of activism, it has been chosen as the theme for TEDxRoseTree.

Cookie is a Philadelphia-based drag performer, a classically trained vocalist, a songwriter, an activist, a husband, mama to the cutest little Yorkshire Terrier ever, a music teacher and lover of all things sparkly. She mastered walking in 5 inch stilettos in the night clubs of Boston, achieved her hair fantasy by studying vintage videos of Grace Bumbry and founded the giving project Art of the Heel. Cookie grew up in historic Auburn, NY with gospel in her ears, civil rights in her blood and many songs in her heart. After training at Ithaca College, Cookie has been in and out of the drag scene. She began performing in the Philadelphia area as host of the Art Song Repertory Theater Company’s series “Saturday Afternoon Drinking Songs” in 2013. She has appeared in the The Bearded Ladies 2018 production "Do You Want A Cookie", as "The Wind" in the Opera Philadelphia production "Queens of the Nights", and most recently in concert at the The Barnes Foundation in Philadelphia.

David is a disabled combat veteran, an entrepreneur, a CEO, and a professional dog trainer. He served a tour overseas in 2007 with the U.S. Army as a paratrooper in the 82nd Airborne Division. During the tour, he was awarded with an Army Commendation Medal (with Valor Device) and The Purple Heart. After struggling for years with Post Traumatic Stress, he found that the power of healing dogs can bring is remarkable. Since then, he has dedicated his life to helping animals and humans. He is now the CEO of At Attention Dog Training, where he and his team train dogs every day in an effort to keep happy dogs in happy homes.

Diana believes we all have a job to do on this earth—hers is to help women feel powerful. She is a certified nurse-midwife and pediatric nurse, with a bachelor's degree in Anthropology (Emory University), and bachelor's and master’s degrees in nursing (New York University). She is the Digital Education Editor at Motherly and the founder of Gathered Birth. Crossing things off her bucket list is (one of) her favorite things: In 2016, Gathered Birth a motherhood wellness center in Media, PA was born. She wrote a book! The Motherly Guide to Becoming Mama; Redefining the Pregnancy, Birth, and Postpartum Journey (April 2020). And now she gets to speak at TEDxRoseTree. It feels like a dream. Diana is mama to three silly children, wife to a tall graphic designer, and is much better at taking care of babies than she is of plants (even though she tries really hard).

Heather has worked in healthcare since 1989. A lifelong animal lover, in 2015 she bid on an African safari on a whim and won! Heather returned knowing she wanted to make an impact in conservation. In 2016, she founded the nonprofit PA Rhino Conservation Advocates (PARCA, Inc.) based in Media PA. Heather leads the organization whose mission is to fund the relocation and protection of wild rhinos, fund the care of young rhinos orphaned by poaching, and raise public awareness about their plight. PARCA has funded the move of two rhinos from South Africa to Botswana, funds the care of a rhino orphan in South Africa, and has funded other anti-poaching activities in Kenya.

Dr. Nagl is the Ninth Headmaster of The Haverford School. He was previously the inaugural Minerva Research Professor at the U.S. Naval Academy and also taught at West Point and Georgetown University. Dr. Nagl was a Distinguished Graduate of the United States Military Academy Class of 1988 who earned his master’s and doctoral degrees from Oxford University as a Rhodes Scholar. He is also a Senior Fellow at the Foreign Policy Research Institute in Philadelphia. He also served in the Army for 20 years, leading a tank platoon in Operation Desert Storm and serving as the operations officer of a tank battalion task force in Operation Iraqi Freedom. Dr. Nagl is the author of Knife Fights: A Memoir of Modern War and of Learning to Eat Soup with a Knife.

Kelly is an educator who believes in being solution-oriented for the greater good of communities. This approach has manifested in a multitude of ways throughout her career including teaching under-served middle schoolers in a Philadelphia charter school and upper elementary students in the Wallingford-Swarthmore School District. It is here that she incorporated the Responsive Classroom methodology to ensure the social and emotional growth of her students. Most recently, Kelly founded a parent diversity group within a Delaware County, Pennsylvania School District, called the Melting Pot; focused on creating diversity awareness among students, teachers and administrators. In addition to her 15 years as an educator, she is also a graduate of Swarthmore College, where she received her Bachelor of Arts in English Literature, with a special major in education. Kelly is a mother of three children, married to her Swarthmore sweetheart, and a New York City native.

Linda is the founder of Decahedralist Consulting, a boutique strategy & innovation firm. With a passion for the intersection of business, technology and innovation, she works with brands to define their future where emerging technologies are transforming markets. Clients have included the smallest of start ups to blue-chip brands including TDK Electronics, British Telecom, Canon Professional, Hewlett Packard, Fisher-Price, Hampton Inn and Kraft. A Mass Communication graduate of Boston University, Linda received her MBA from the Rotterdam School of Management, Erasmus University in 1991. When not pondering the future of technology and its impact on humanity she is usually making art. Glass, precious metal, textiles - she’s also works in CAD and 3D art. Inspiration comes from regular jaunts to far-flung countries where she’s never happier than when on a motorcycle and a dirt road, dodging chickens and water buffalo.

Lyonzo is a social entrepreneur, community architect, urban wellness advocate and urban maestro on an unstoppable mission. Lyonzo currently resides in Philadelphia, having entered the world in the melting pot of the Bronx, NY. Living in a culture filled with people suffering from stress and anxiety due to poor mental, spiritual, physical and emotional diet, motivated Lyonzo and his two co-founders created an entertainment and wellness company called Glbl Vllg (Global Village). Lyonzo dedicates his life to people from all walks of life, focusing primarily on millennials, encouraging wellness through interactive entertainment. He is creating this new social form of community connection through the rapidly growing The VLLG JAM (Philly). Check it out!

As president of MSM Global Consulting, Maria provides consulting, training, and coaching to leaders, facilitates strategic initiatives and enacts organizational change. She specializes in diversity and inclusion, intercultural competence, resilience and well-being in the workplace. Maria has served in leadership positions for Management Concepts, the U.S. Department of State, Federal Executive Institute, and the International Multicultural Institute. Maria earned a Master’s in International Communication from American University and Bachelor’s in Organizational Studies and Spanish from the University of Michigan.

Mel Soria is an award-winning music video, commercial, and film director, best known for his work with Fall Out Boy, Train, and Panic! At The Disco. Born in the Philippines, Soria immigrated to the US with his family at the age of five and grew up in the suburbs of Philadelphia. He studied architecture and industrial design at Virginia Tech and then earned an MFA in Film Production from Florida State University. His music videos have garnered multiple MTV Video Music Award nominations, winning for BEST ROCK video in 2015 (Fall Out Boy, “Uma Thurman”) & 2019 (Panic! At The Disco, “High Hopes”). Watch it here: https://youtu.be/IPXIgEAGe4U

Bassist Nicholas Krolak is a young veteran of the Philadelphia jazz scene. He has spent the last decade working as a side-man, experiencing new styles, and studying with the masters. Now, he has taken all he has learned and is applying it to his own group. Tracing the lineage of bebop into the contemporary, his compositions celebrate the city and honor nature. He is also the host of the Voice equals Power Podcast in which he interviews visionaries of the Jazz world, pursuing the question: How does an artist find their voice?

Shana is the Executive Director of Circadium, the first higher-education program for circus in the United States. Along with her husband, Greg Kennedy, she had an active earlier career touring as a juggler and aerialist, and began teaching when she settled down with her 3 children. In 2000, she founded the Philadelphia School of Circus Arts, running recreational circus classes for kids and adults. Now, both the recreational and the professional schools reside at Circus Campus, a hundred-year-old church property in West Mt. Airy. With over 500 students training every week, circus education is becoming an important part of the city's cultural fabric.

Swati helps individuals live with purpose, and on purpose. She is the founder of Purpose Squared, Inc. - Therapy & Executive Coaching, a boutique provider of mental health counseling and executive coaching. Swati spends most of her days counseling, coaching and supervising her team. You may also find Swati on campus, teaching as an Adjunct Assistant Professor of Psychology and Education at Columbia University in the City of New York; at Google NYC, where she counsels individuals on-site; and in all corners of the Upper West Side of NYC, chasing her three little kids — each likely running in a different direction.

Shayne is a vocalist and pianist with performances spanning two decades at venues in both the New York and Philadelphia circuits, and beyond. Cited by the Broad Street Review as “one of the region’s busiest and best jazz singers,” V. Shayne has been appointed “one to watch” and a “shining light" by All About Jazz. V. Shayne’s debut album, Lovesome, was released Spring 2019, followed by a subsequent EP, Gleaming. 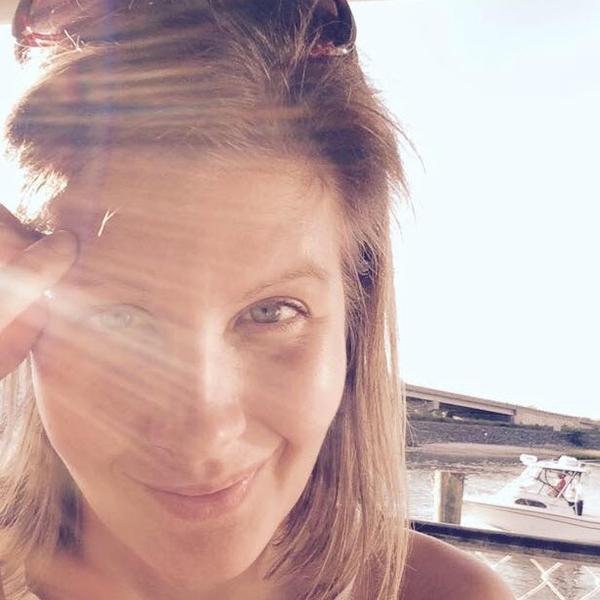