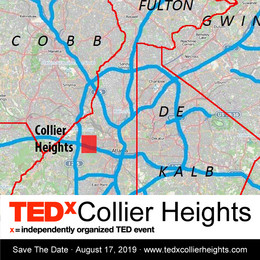 Southern neighborhoods with a population that has proven capacity to have effect on character, development, and behavior of everything on a local, national, and global scale.

SPEAKER ANNOUNCEMENT: Bem Joiner believes in Atlanta. Joiner, is one-third of the civic-minded creative collective “Atlanta Influences Everything.” Bem was born and raised in the West End neighborhood with in the City of Atlanta. He has a pure passion for its people and progress. Joiner, majorly contributes to what makes culture in Atlanta, cool and captivating. As a creative culture curator, Bem has managed and consulted a variety of lifestyle brands and designed meaningful programs for clients like Sprite, Mississippi Dept. of Education, truth.com, Jack Daniels, Nissan, the National Black Arts Festival and countless others. Most recently, Bem served as Community Engagement Coordinator for the Center for Civic Innovation. There, he used a creatively academic approach to social impact and entrepreneurship, to bring various subcultures, community members and other sectors of Atlanta together. To collaborate, innovate and elevate the city and all of its citizens.

Joycelyn Wilson is an Assistant Professor of Hip Hop Studies and Digital Humanities in the Black Media Studies cohort, located in the School of Literature, Media, and Communication in the Ivan College at the Georgia Institute of Technology. As an educational anthropologist, Dr. Wilson is an expert in African-American music and performance - with particular interests in contemporary modes of cultural production in the American South and Hip Hop in general, as well as their broad impact on higher education. She is also the founder and CEO of the HipHop2020 Archive and Innovation Lab, an educational resources design studio inspired by the Hip Hop Archive. Dr. Wilson has written for several market-leading publications including FADER, XXL, The Source, Rap Pages, and wax poetics - often introducing budding artists to a wider audience. Currently, she is a music and culture columnist for The Bitter Southerner, where she writes about the history of Atlanta culture.

Dr. Nicole Garner Scott is a sought after Money Coach, Certified Financial Educator, speaker, author and serial entrepreneur. Nicole received her undergraduate degree from Georgia State University, her MBA in digital entrepreneurship and awarded an honorary doctorate recognized for her work in business. A mother and wife, this native Atlantan has been recognized for her entrepreneurial innovation by the White House under the Obama administration as well as receiving the Mayoral Phoenix award which is the highest awarded bestowed by the city of Atlanta. Nicole has created a socially conscious digital empire that touches millions. Her work as the founder of Amount Financial Services is her contribution to combat the societal constraints that financially limit communities of color. Dr. Nicole Gainer-Scott is an alumni of Westlake High School in Atlanta, Georgia.

Dr. Rashad Richey’s aggressive and opinionated on-air style led him to being voted “Best Talk Radio Personality in Atlanta” by readers of the Atlanta Journal-Constitution for his weekly midday show on News and Talk 1380-WAOK. Rashad is also the Political/Social Commentator for The People’s Station V-103, the nations’ largest urban station. Rashad is also on television as the daily Political Analyst for CBS 46 News and Peachtree TV Atlanta. This year, Rashad was nominated for an Emmy Award for his riveting television coverage. You can also see him as a weekly Progressive Commentator on Fox National News and MSNBC. Beyond broadcasting, Rashad serves as the Chief Editor-At-Large and Sr. Writer for Rolling Out Magazine. As a teenager, Rashad experienced life as a foster child and encountered true despair. This passion sparked the flame that created The Rashad Richey Foundation, Inc., an organization dedicated to mentoring at-risk youth.

Dr. taj anwar baoll is a native Atlantan and descendant of the well-known Perrin Family (South Carolinian geechees who relocated to Atlanta after World War II). Tajhiek Anwar Nicole Quiet Storm Baoll (taj's full name) is a mother, sociologist, veteran community organizer, activist, farmer, certified holistic doula, direct entry midwife and breastfeeding specialist, business owner, panelist and an initiated/ crowned Iyalosa Obatala. She is also a career paramedic lieutenant with a major metropolitan public safety department, a civil service member in Atlanta; and a blue-collar, working-class champion. Her businesses, events, and co-ops have refined her skills and centered them around the guiding principles of food, clothing, and shelter and access to quality medical care. She credits her parents with imbuing in her an immaculate work ethic and a desire for family greatness.

Lisa Cunningham is a native of South West Atlanta and entered into film production while attending the University of Georgia. She is a Producer/Director and over the past 25 years has been actively involved in the production community in Atlanta working on over 1500 projects. Her notable career started with music videos where she produced for artists such as TI, Future, Rascal Flatts, Gladys Knight, Faith Evans and Missy Elliott to name a few. Now, with a strong footing in branded digital content, Lisa has produced projects for McDonalds, W Hotels, Hartsfield-Jackson Atlanta Airport, The History Channel and many more. As an influencer, she was selected by Mayor Keisha Lance Bottoms to serve on the inaugural LGBTQ Advisory Board for the City of Atlanta. Her community involvement continues as a philanthropist who devotes her time to several local charities focused on disadvantaged youth and underserved minorities.

A native Georgian, Odie Donald II leads the City of South Fulton’s approximately 500 employees in service of its more than 100,000 residents. Donald is a nationally recognized leader in government administration, he serves with the distinction of having been appointed the first City Manager of Georgia’s fifth largest city. Donald is an active civic leader both in his home state and nationally. His volunteer work and community affiliations include serving as Secretary on the Executive Committee for the National Association of State Administrators (NASWA), a member of the Workforce Development Council’s Board of Trustees for the U.S. Conference of Mayors, a member of the DC 100 Resilient Cities Executive Cabinet, the DC Career Academy Network (DC CAN), the CTAE Advisory Board for Atlanta Public Schools, and he was a founding member of the Savannah Graduates Executive Council. Odie Donald is a graduate of Georgia State University, earning a Bachelor of Arts in History and an MBA.

Richard Dunn is an Atlanta native, serial entrepreneur, and driver of Atlanta's arts & culture scene. In 1998, Dunn co-founded Groovement Inc., an artist management and event production company that focused on the soul scene and was the launching pad for the career of four-time Grammy winning vocalist India.Arie, singer/songwriter Anthony David and soul singer Donnie. His entrepreneurial endeavors include, co - owner of Sugarhill an legendary live venue in Underground Atlanta. The Muddy Water Group, a creative services and live concert production/promotion company, and founding partner of the popular Atlanta restaurant Tom Dick and Hank. Richard also serves as the Vice President of Business Development at The Atlanta Voice Newspaper, one of Atlanta’s longest running African-American newspapers founded by his grandfather J.Lowell Ware. Richard is a proud Collier Heights native as well as an Alumni Fredrick Douglass High School.

Zachary Wallace has been a major part of Atlanta’s urban entertainment community. His voice can be heard celebrating Atlanta’s rich Hip-Hop heritage at the top of DJ Greg Street’s popular radio show, offering newcomers and a new generation of fans a history lesson full of Atlanta’s “culture facts”. Zak’s first-hand accounts of Atlanta’s rap culture, as a young songwriter, he partnered with entrepreneur Noonie Lee and mega producer Jazze Pha to launch the boutique record label Sho’Nuff. However, with success came years of bad eating & lifestyle habits. Zak, watched his weight surpass 300 lbs, “Big Zak” realized he needed to make changes and become a leader in communities where healthy eating options were not always readily available. Wallace, started having friends come to his home for beta-testings, preparing delicious meatless plates. After a surprisingly unanimous response, Zak then decided to start Local Green Atlanta in the winter of 2017.