Join us for the day as we turn our attention to uncover how women and non-binary and genderqueer people the world over are ‘Showing Up’, breaking out and pushing boundaries.

Whatever their focus and talent – business, technology, art, science, politics – these pioneers are joining forces in an explosion of discovery and ingenuity to drive real, meaningful change.

As part of the Global TEDxWomen events programme, TEDxLondonWomen will celebrate how these dynamic and diverse people are showing up to face challenges head on, all while empowering each other to shape the future we all want to see.

TEDxLondonWomen is an inclusive space. We are passionate and proud to reflect diversity both in our audience and on our stage.

We'll be showing up. Will you?

A multi-talented singer and musician, anaiis has lived multiple lives. Moving from Toulouse, to Dublin, to Dakar, to California, to New York and finally to London, anaiis's feeling of belonging everywhere and nowhere has added many colours to her creative palette. Her music explores narratives of blackness, but purposefully seeks to defy any attempts to reduce Blackness into a singular narrative, instead showing human nature in all its complexity. anaiis style transcends genres; her tone is fearless and urgent, her sound a languid haziness. Paying homage to Nina Simone, anaiis’ debut single “Nina” touches on themes of reclamation and freedom. Her latest project “Darkness At Play” carefully exposes a world in decay, yet resists the temptation to minimise this world to its doomed fate and goes on to explore political contradictions, selfhood, and the divine feminine.

Before it was really part of her job, Angela has always found ways to focus on how our human systems – energy, production, consumption, transport and planning – need to change to come into line with our planetary ones. After finding her home in the environmental advocacy sector 4-5 years ago, Angela is now Chief Advisor on Economics and Economic Development at WWF (World Wide Fund for Nature). She provides economic advice across the climate, food and nature programmes, as well as leading on trade and industrial policy for a green transition.

Award-winning editor, writer, speaker and model, Jamie Windust, explores authenticity and creativity as a non-binary person. Jamie frequently writes publications including the Metro, the Independent, Gay Times. They are the editor and founder of award-winning magazine FRUITCAKE, which explores authenticity through creativity for the LGBTQ+ community through its biannual publication. They’ve also worked within the fashion industry with UGG, ShowStudio, ASOS and River Island, where they explore the representation and impact of queer identities in fashion. Jamie speaks at Universities up and down the UK and has appeared on BBC London, Sky News and ITV London discussing topical news surrounding the LGBTQ+ community. Jamie is currently writing their debut book which will offer advice and a multidimesional insight into life as a non-binary person.They aim to promote a message of joy, strength and power through identity, reminding people of the joy of self.

Dr Julia Shaw, a psychological scientist at UCL and the co-founder of Spot, a startup that helps employees report workplace harassment and employers to build a more inclusive and respectful work environment. Her bestselling debut book, The Memory Illusion, was published in 2016 to critical acclaim and has been translated into 20 languages. She went on to publish her second international bestseller Evil: The Science Behind Humanity’s Dark Side in 2019.

Global retail authority and advocate for The Kindness Economy

A determined, passionate advocate of the social role of retail, Mary is at the forefront of making the nation better consumers and the country’s shops better businesses with her team at her agency Portas. Her latest project, Work Like A Woman, is a manifesto for change and the book and podcast of the same title are being used by businesses across the UK to create positive change within their organisations. In recent years, her work life and personal life have become increasingly intertwined, focusing on the things she cares most about: making our world a fairer, more kind place. One of Mary’s proudest achievements to date is her ‘Mary’s Living and Giving’ charity shops in partnership with Save the Children. There are 26 shops across the UK now and these have raised over £22 million for charity.

As a research, workshop facilitator and writer, Nathaniel’s work explores masculinity, mental health and sex education. Working with The Good Lad Initiative, he talks to boys and young men about masculinity and what they think “being a man” is. Empowering them to think more widely about masculinity and gender, Nathaniel offers guidance about the type of men they can actually be, and encouraging them to create and enjoy more gender equal relationships. Nathaniel also works with Sexplain UK to educate young people about their bodies, consent, gender and sexuality, healthy relationships and pornography. He is determined to help young people have an opportunity to talk about these topics with impartial adults – something to which many young people do not have access. Nathaniel also co-founded the inner city swimming club, Swim Dem Crew, which uses swimming as a medium to bring people together, cultivate a strong community and make the sport more inclusive.

Nikita Gill is one of the most exciting young writers working today. She tells stories through the mediums of verse, prose and the stage. She has embraced social media to share her writing, and is the UK’s most followed poet. Nikita was raised in New Delhi, before moving to the UK to do her Masters. She originally planned to move back to India, but chose instead to stay here and focus on her writing, working as a cleaner, and then as a carer to do so. Nikita’s most recent collection is Great Goddesses (2019), a stunning illustrated collection of stories and poems about goddesses from Greek mythology, which retell and reimagine the well-known stories of Hera, Athena, Scylla, and many more. Her many other projects include Maidens, Myths and Monsters, a one woman show inspired by Fierce Fairytales, and a children’s play entitled The Krumpus. Nikita is a National Poetry Day ambassador, and speaks at festivals and events throughout the country all year round.

Onjali is the founder and CEO of Making Herstory: an organisation mobilising men, women and children from all walks of life to tackle the abuse and trafficking of women and girls in the UK and beyond. She is also the founder of O's Refugee Aid Team, which works to aid refugee response units in Calais, Dunkirk and beyond. Her first book, ‘The Boy at the Back of the Class’ went on to win the Waterstones Children’s Book Prize 2019 and the Blue Peter Book Award 2019. Her second children’s novel, ‘The Star Outside My Window’, tackles the impact of domestic abuse on children’s lives.

As recent University of Cambridge graduates, Chelsea and Ore experienced being a minority in a predominantly white institution. Their experiences led them to write Taking Up Space, a groundbreaking exploration of the problems of diversity in education. This manifesto for change is both a guide for black girls to navigate universities and higher education and a call for change in these white dominated institutions more widely. Chelsea Kwakye is a first-class honours History graduate from Homerton College, Cambridge. She is currently studying at the University of Law in preparation for a training contract with a city law firm in London. Ore Ogunbiyi is a Nigerian-British Politics and International Relations graduate from Jesus College, Cambridge. She has since completed a Masters in Journalism at Columbia University, New York and is currently working as a Special Assistant and Speechwriter to the Vice President of Nigeria.

A survivor of child marriage, who lost her sister Banaz in a tragic “honour” killing, Payzee’s focus to prevent so called “honour” based abuse and child marriage could not be more personal. A Kurdish immigrant, raised in London, with a successful career in the fashion industry, she uses her voice to speak out as a survivor – not a victim – and has made it her mission to be a changemaker, helping to tackle these harmful practices. As an IKWRO ambassador and campaigner, her story and experiences have reached international audiences, including the Kurdish community. She has spoken widely on the need for changes to the laws surrounding child marriage and “honour” based abuse across radio, television and newspapers and met with government officials and the Home Office to explain first-hand why change is needed to finally make child marriage a crime.

Poppy is a primary school teacher and lives and works in inner London. She was named London’s Newly Qualified Teacher of the Year in 2019 and she represented Ekaya at a conference in Brussels regarding the rights of young citizens in Europe. As a mother and teacher, Poppy works towards eliminating barriers that prevent children from realising their full potential, regardless of their backgrounds. Poppy is a graduate of TEDxLondon’s young speaker programme, OPENx.

A trainee clinical psychologist, spoken word artist and poet, Sanah’s performance journey began with BBC Words First and since has taken her to the stage of Shakespeare’s Globe Theatre. She won the Outspoken Prize 2019 in the Performance Poetry category for her piece “My Dua is Love”. Recently, she was a reporter on and presented "Young, British and Depressed," a Channel 4 Dispatches documentary that aired in July 2019. Sanah works closely with the grassroots organisation Jawaab to help tackle Islamophobia, and her community work has involved collaborating with organisations such as Human Appeal and Childline. Currently, she is conducting research to deconstruct whiteness within clinical psychology, while developing community projects promoting further dialogue around queer and trans people of colour (QTPOC), young people’s mental health, and spaces for queer muslim womxn.

From a young age, Sarah and her sister Ysra, were competitive swimmers, coached by their father and hoped to compete on an international level. Sarah was also a law student when violence erupted in Damascus during the Syrian Civil War and the family fled. When Sarah eventually settled in Berlin, she decided to volunteer with the Greek non-profit, the Emergency Response Center International (ERCI) for 2 years on and off, putting on hold her university studies at Bard College in Berlin. Despite the case against Sarah still being open, Sarah has now resumed her studies at Bard College, where she also runs SHORE: Students Helping Organize for the Refugees of Europe, a student group collecting donations and raising awareness about refugees.

A Paralympic long jumper, who competes for Great Britain, Stef is a five-time world record holder, world champion (London 2017 long jump), and triple Paralympic medallist in the long jump (2016, 2012) and 200m sprint (2008). She has an honours degree in biochemistry, and away from the track works as a broadcaster, speaker, actor, and model. She is currently training for the Tokyo 2020 Paralympic Games. Stef is alsovice president of UK Athletics, a member of the British Paralympic Association Athlete Commission and an ambassador for the Leprosy Mission UK. Stef was a finalist on BBC Celebrity Masterchef 2018 and continues creating weird, healthy, and delicious culinary concoctions!

Specialist in far-right extremism and co-founder of Moonshot CVE

Vidhya led the European Union’s first inter-governmental initiative on far-right terrorism and extremism. She worked with hundreds of practitioners in 10 European countries to design policy, initiate projects, and build capacity to respond to far-right extremism and terrorism. As co- founder of Moonshot CVE, she directs overall strategy and oversees campaigns, software development, and digital projects in over 25 countries. Under her leadership, the company has pioneered new partnerships with tech companies to respond to violent extremism on their platforms. In her spare time, Vidhya serves on the Board of Life After Hate, an organisation set up by former white supremacists, and dedicated to helping individuals leave hate groups. 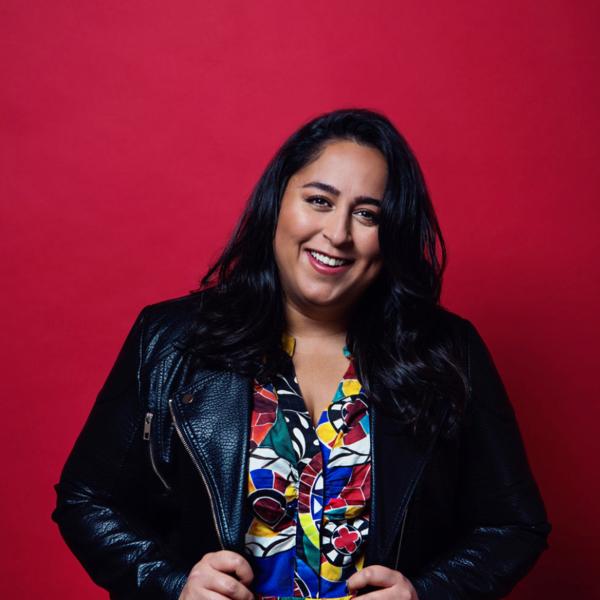