Theme: Escaping from a black hole

In the spirit of ideas worth spreading, TEDx is a program of local, self-organized and non-profit events. It brings a TED-like experience of multidisciplinary talks from inspiring speakers. This year’s TEDxAberystwyth theme is "Escaping from a black hole". The event features thought-provoking talks with novel and stimulating ideas from the arts, science, media, sport, environment, society and beyond. Find out more about our speakers at @tedxaberystwyth and https://tedxaberystwyth.com/

Alyn Wallace is a landscape and timelapse astrophotographer based near the Brecon Beacons National Park in South Wales. He was featured on the BBC Two “Moonshot” documentary to mark the anniversary of the moon landings, where he set out to take his ultimate image of the moon, and celebrate Wales’s Dark Sky Reserves. Alyn's work has been recognised by NASA, National Geographic, the BBC and The Times, among others. Alyn shares his knowledge through Astrovlogs on his YouTube channel and hosting astophotography workshops in Wales and Europe. His work can be found at: https://alynwallacephotography.com/.

Callum is a full-time ‘millennial’, currently working in management consultancy and youth policy research, helping to equip recent graduates with the skills they need to thrive in an ever evolving workplace. Callum began his career at JP Morgan Asset Management, where he also served as co-lead for NextGen – JPM’s global collaborative forum for early careers professionals. Callum holds a Bachelor’s Degree in History from the University of Bristol and is undertaking a Master’s degree at the University of Cambridge.

Languages graduate from London University, Carolyn has a passion for helping people identify and work towards achieving their potential. Her own very painful career crisis, following a successful but unfulfilling business career working in property, international software and publishing, led to her identifying her true North and retraining to become a careers adviser and now a career coach. A former Aberystwyth University Deputy Director and Institute Director of Student Development and Employability, she took Voluntary Severance in 2015 to set up her own company supporting students, recent graduates and professionals seeking and needing to change their career. You can find out more about her work at: https://www.careeralchemy.co.uk/

David Stones is a civil engineer working to protect the Earth’s resources. David speaks about how we can make new and old houses address the Climate Emergency. His explores the environmental impact of housing and dispels the myth that it is expensive and difficult to build low-energy homes. David shows how building methods can be changed quite simply to support and accelerate the journey to zero carbon.

Ieva Krištopāne is Latvian born and raised travel enthusiast, who started off her journey in London at the age of 18 and has lived in 4 different countries since. Little did she know that the greatest journey and, the most effortless, was her actual experience of stopping cars on the road. In 5 years she has jumped into more than 600 cars in 2 different countries, which left her with unforgettable experiences. Ieva works as a Social Media manager and content creator.

Founding Trustee and Managing Director of the International Egg Foundation

Julian Madeley is the CEO of the World Egg Organisation and International Egg Commission. He is also a Founding Trustee and Managing Director of the International Egg Foundation, working to provide high quality protein through eggs to children in areas of protein poverty. Julian trained in Government Affairs in Washington DC, going on to work in London, Brussels and Geneva. Julian has also worked in South East Asia and in Southern Africa, both on commercial and United Nations development projects. Julian studied general agriculture at Harper Adams, followed by a Master of Philosophy Degree in Economics and Finance at Corpus Christi College, Cambridge.

Leighton Andrews is Professor of Practice in Public Service Leadership and Innovation at Cardiff Business School. He teaches, researches and writes in the fields of government, public leadership and innovation, education policy, regulation and governance of media, social media and digital. Formerly Minister for Education and Skills and Minister for Public Services in Carwyn Jones’s Welsh Labour Governments from 2009-16, a Deputy Minister in Rhodri Morgan’s One Wales Government from 2007-9 and Assembly Member for the Rhondda from 2003-16. He was the BBC’s Head of Public Affairs in London from 1993-1996 during its Charter Renewal campaign. He recently published a book "Facebook, the Media and Democracy: Big Tech, Small State?".

Cryptocurrency and Blockchain Lead at Cambridge Centre for Alternative Finance

Michel Rauchs is a Luxembourgian born cryptocurrency researcher. Having been interested in the intricacies of monetary and financial systems for a long time, Michel went down the proverbial rabbit hole after discovering the cryptocurrency Bitcoin in early 2014, and has yet to find his way out. For the last two years, he has been leading the Cryptocurrency and Blockchain research programme at the Centre for Alternative Finance at the University of Cambridge, where he co-authored six research studies and co-created the Cambridge Bitcoin Electricity Consumption Index (CBECI), a real-time model estimating Bitcoin’s annual electricity consumption.

Sepsis Lead for the Cardiff and Vale University Health Board

Dr Paul Morgan is a consultant in Intensive Care and Sepsis Lead for the Cardiff and Vale University Health Board, based at the University Hospital of Wales in Cardiff. His TEDx talk will cover what sepsis is, how it affects people and how survivors are often left with a variety of medium-to-long-term health problems that can be life-changing. Not everyone with sepsis will die but not everyone with sepsis can have their life saved. The idea Paul shares is that by raising awareness of sepsis to health professionals and the public alike, fewer people will die unnecessarily from sepsis and that sepsis survivors suffer fewer post-sepsis health problems and can access the help they need.

After graduating, Dr Philip Charlesworth served for 16 years in the Royal Air Force as an engineering officer. After leaving the RAF he worked for Airbus on research and engineering projects. His main areas of research were in networking satellites and unmanned aircraft. Dr Charlesworth is a Visiting Professor at Liverpool Hope University, leading research into small solar-electric aircraft.

Pippa Moore is a marine community ecologist, interested in all aspects of marine ecology. Her research focuses on the consequences of climate change, global warming and ocean acidification, as well as other anthropogenic impacts, like fishing, coastal engineering or invasive species. She is investigating those effects on populations and communities of inter-tidal (rocky shores) and shallow sub-tidal systems (kelp forests and seagrass), as well as man-made structures (e.g. coastal and offshore engineering).

Rupert Allan currently works as Country Manager for Humanitarian OpenStreetMap Team (HOT) in Uganda, where projects include ‘Crowd-Sourcing Non-Camp Refugee Data’(USSD BPRM), ‘Uganda Open-Mapping Project’(World Bank/OpenDRI), and ‘Data for Resilience in Refugee Settings’(GPSDD). Rupert also represents the team on the Uganda Ministry of Health Emergency Operations Committee, developing the Ebola Data Resilience Strategy for immanent outbreak following cross-border events in the DRC (Congo). Engaged in interventional design and field operations since 1988, his work has been characterised by creative improvisation in crisis environments across Humanitarian Disaster and Film Production. He holds a Masters in Visual Culture and Anthropology from the University of Wales, and associates his research with the Displacement Studies Research Network (University of Plymouth, UK), and the Manson Unit, Medecins Sans Frontieres (MSF, London).

Samantha Horwill is Managing Director of Practice Unbound in Wales, a not-for-profit social enterprise working across the UK to change the way Health and Wellbeing services work, so that care can be focused on what matters to individuals. Sam has over a decade of experience of working with primary care, developing and delivering new community-led service models in Dermatology, ENT, Neurology and Community Mental Health. As Chair of the Machynlleth Community Children’s Project she undertakes a key leadership role in the local community to ensure that the education and care of youngest citizens of the Dyfi Valley is of the highest quality. She is a passionate advocate for renewable technology and an electric vehicle enthusiast, seeking ways to accelerate progress in this area across the NHS.

Stephen Fearn is the Founder and Club Leader of the Aberystwyth Robotics Club. The Club was set up to support young people with no previous experience to explore building technology through the medium of building robots. Stephen has a long history of building interactive robots, including Doris the Dalek, a K-9 and an R2D2. In addition, in his spare time Stephen is also the founder and driving force being Aber Steampunk, a weekend of Steampunk activities, fun and entertainment based Aberystwyth. 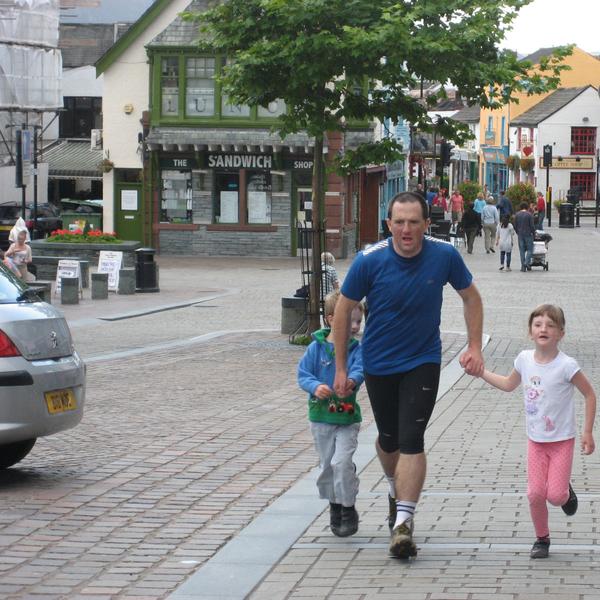