Our theme, Rethinking Relationships, was selected in part so we can examine how paradigm shifts in behavior, technology and global influences impact our significance, as individuals and as connected beings.

We look forward to examining these issues in greater depth at TEDxBocaRaton 2019.

Dr. Bertrhude Albert is a proud Haitian-American. At the age of 8 she immigrated to the United States from Haiti with her family. Ten years after immigrating, Dr. Albert began her journey to becoming a University of Florida triple Gator. In 2012, Dr. Albert received her BA in English, in 2014 she received her MA in Latin American Studies, and in 2016 she completed her PhD in Agricultural Education and Communication. Throughout her academic journey, Bertrhude received several awards such as UF’s Hall of Fame, UF’s Teaching Assistant of the Year, the International Outreach Award, and more. Her greatest honor however, was co-founding P4H Global. Dr. Albert currently serves as the CEO of P4H Global. She is committed to seeing Haiti rise to her full potential and destiny through sustainable development and human capacity.

Dave Bradley joined IBM in Boca Raton as Senior Associate Engineer in June 1975, after receiving a Ph.D. in Electrical Engineering from Purdue University. Dave spent his first years working on small systems — Series/1 and then System/23 DataMaster. In September, 1980, Dave became one of the “original 12” engineers working on the IBM Personal Computer, responsible for the ROM BIOS code. He continued to work on Personal Computer systems including the PC XT, the PS/2 Model 30 and the 486/25 Power Platform and the PS/2 Models 90 and 95. Dave is best known as the inventor of the infamous three-key sequence, Ctl-Alt-Del. He finished his IBM career in the eServer xSeries Architecture and Technology department, working on advanced technology projects for the xSeries servers. Dave was one of the original members of the IBM Academy of Technology when it was formed in 1989 and has served for a total of 5 years on its Technology Council, the governing body of the group.

Kerri Cahoy is an Associate Professor in Aeronautics and Astronautics at the Massachusetts Institute of Technology. Kerri leads the Space Telecommunications, Astronomy, and Radiation (STAR) Laboratory, and design, builds, launches, and operates shoebox-sized satellites called CubeSats. Kerri works with CubeSats to improve hurricane tracking using an instrument called a microwave radiometer. Her team flies miniature microwave radiometers on CubeSats and has shown that they work as well as larger and more expensive satellites with the Microsized Microwave Atmospheric Satellite (MicroMAS-2A). The next step is to go from only having one CubeSat in orbit to several, so that they can fly over the same location more often, like every fifteen minutes instead of only two or three times a day. Kerri has a Ph.D. and master’s in Electrical Engineering from Stanford University, and a bachelor’s in Electrical Engineering from Cornell University.

Dr. Priscilla Zelaya is the Co-Founder and Chief Operations Officer of P4H Global. P4H Global is a 501(c)3 nonprofit organization headquartered in North Lauderdale, Florida. P4H Global’s goal is to train people to transform nations. This is done in two ways: (1) by training Haitian educators and (2) by hosting Impact Trips aimed at teaching Americans about sustainable development. Dr. Zelaya received her BA and M.Ed degrees from the University of Florida in Elementary Education and her Ph.D. in Agricultural Education and Communication. Between her Masters and Ph.D. degree, Dr. Zelaya taught 2nd grade at a Title 1 school in Gainesville, FL. Her experiences in Haiti, Nicaragua, and in the classroom have solidified her conviction that education can end poverty. She hopes to live her life inspiring others to pursue their dreams and use their God-given talents to change the world.

As Head of Innovation and Creativity at Disney, Duncan and his team helped Imagineering, Lucasfilm, Marvel, Pixar and Disney Parks to innovate, creating magical new storylines and experiences for consumers around the globe. As founder of iD8 & innov8 he now brings his extensive Disney experience to audiences around the world using a very unique approach to Design Thinking, that not only places the end user at the core of the creative thinking process, but also looks in new and usual places to uncover insights for innovation, helping people capture unlikely connections, leading to fresh thinking and disruptive ideas. Duncan is a multiple Ted X speaker and contributor to Fast Company Magazine. He teaches Master Classes at Yale, the University of North Carolina, Duke University and the University of Florida. In 2008 he received the American Citizen of Choice Award at the White House. In 2014 he was awarded an Hons. Doctorate from Edinburgh University in Scotland.

Fred Guttenberg’s professional life includes over a decade of experience in sales and management with Johnson and Johnson, followed by 15 years as an entrepreneur, having built a business that consisted of 19 Dunkin Donuts, which he sold in November 2016. Fred’s brother Michael was one of the original first responders during 9/11 at the WTC. Michael was with a team of doctors who got trapped in the WTC as it collapsed. Amazingly, the room that they hid out in did not collapse. As a result of the ground zero exposure, Michael was diagnosed with pancreatic cancer which he battled, along with Fred’s help and support until October 2017, when he passed away. In February of 2018 he was actively looking for a new purpose when Fred and his family were again struck by another National American tragedy; only this one was far worse. His 14-year-old daughter Jaime, a freshman at Marjory Stone Douglas High School was one of 17 victims brutally murdered in the Parkland Florida school shooting.

Heather Monahan is a best-selling author, former C-suite executive, entrepreneur and founder of Boss In Heels. Having successfully climbed the corporate ladder for nearly 20 years, Heather Monahan is one of the few women to break the glass ceiling and claim her spot in the C-suite. As a Chief Revenue Officer in Media, Heather Monahan is a Glass Ceiling Award winner, named one of the most Influential Women in Radio in 2017 and Thrive Global named her a Limit Breaking Female Founder in 2018. Heather is a confidence expert and is currently working with Fortune 500 companies and professional sports to develop confidence in the workplace and on the court. She’s also a member of Florida International University’s Advisory Council to further serve as a mentor and leader in the South Florida Community. Heather most recently added Guest Professor at Harvard to her list of accomplishments. Heather and her son Dylan reside in Miami.

Sometimes we are connected by an invisible string, at least it feels that way with Indigo Dreamers. Coming from different corners of the world, Jamie, a South Florida native, and Pouya Pourtahmasbi, an Iranian transplant, serendipitously met while studying music at Florida Atlantic University. It didn’t take long for a musical spark to ignite between the two as they collaborated on music projects and exchanged thoughts on life. After graduation, the two produced an EP for four of Jamie’s songs in addition to exploring the south Florida music scene, playing shows at various venues alongside percussionist Reza Filsoofi. In 2014, Jamie won the iTunes Music Festival Competition for her song “Blue”, which inspired a new record. She employed the help of Pouya to produce, arrange, and play bass once again, but this time it would be a more arduous adventure. Three years later they conceived their debut album Lessons of Blue, a story of the joys and pain of maturation.

Ken received his Ph.D. from the University of Utah in 1996 and came to Eli Lilly and Co. in 1998 from the Memorial Sloan Kettering Cancer Research Center as a senior organic chemist. He worked on several projects as a medicinal chemist in the areas of anxiety, depression and inflammatory disorders, and he has been involved in many cross-functional Lilly research collaborations. In the fall of 2004, Ken went into the Lean / 6-Sigma program at Lilly and led ten projects as a 6-Sigma Black Belt before moving back to chemistry as the Head of Global Operations for Discovery Chemistry Research and Technology. In 2008, Ken took on new a new role as a Head in Drug Disposition with responsibilities across the in-vitro, transporter, in-silico, Lead Generation and the isotopic chemistry groups within Drug Disposition. In 2009, Ken moved to Global External R&D where he developed a program for assessment and acquisition of pre-clinical / discovery level opportunities.

Kristin Gallucci speaks to marketers about Marketing with emotion to move brands to align with customers and act with passion. Kristin has over 20 years of experience leading strategic digital marketing, social media, influencer engagement, and analytics initiatives for brands. She’s a Linkedin Top Voice for Marketing & Social Media, is sourced in Inc. Magazine and Adweek, and currently leads strategy for digital marketing at the top franchise brand Signarama for the signage industry. She founded Modern Marketer, a consultancy that helps companies make better connections with their audiences. She speaks regularly on topics such as the changing world of marketing, LinkedIn optimization, and personal branding. She also serves on Board of the American Marketing Association.

Meghana Ranganathan is a Ph.D student in Climate Science at MIT. She received her B.A. in Mathematics from Swarthmore College and has conducted research in many mathematically inclined fields – including statistical paleontology and operations research – before finding a passion in atmospheric and climate science. Previously, she analyzed El Nino-Southern Oscillation forecasts at Columbia University’s Lamont-Doherty Earth Observatory under Dr. Michael Tippett. Currently, she is interested in forecasting complex systems that are often hard to fully observe, exhibit chaotic behavior, and are high-dimensional, with the intent to decrease uncertainties in predictions. Her focus is on glaciology, answering fundamental questions about ice flow with the ultimate goal of better predicting sea level rise. She is also interested in writing and science communication and has written blog posts for Scientific American.

Scott Brinker is VP Platform Ecosystem at HubSpot, helping to grow and nurture the company’s community of technology partners. He writes the Chiefmartec.com blog and serves as the program chair of the MarTech Conference Series. He is the author of the best-selling book Hacking Marketing, published by Wiley. Previously, he was the co-founder and CTO of Ion Interactive. He holds degrees in Computer Science from Columbia University and Harvard University and an MBA from MIT. He grew up in South Florida. Connect with him on Twitter @chiefmartec. 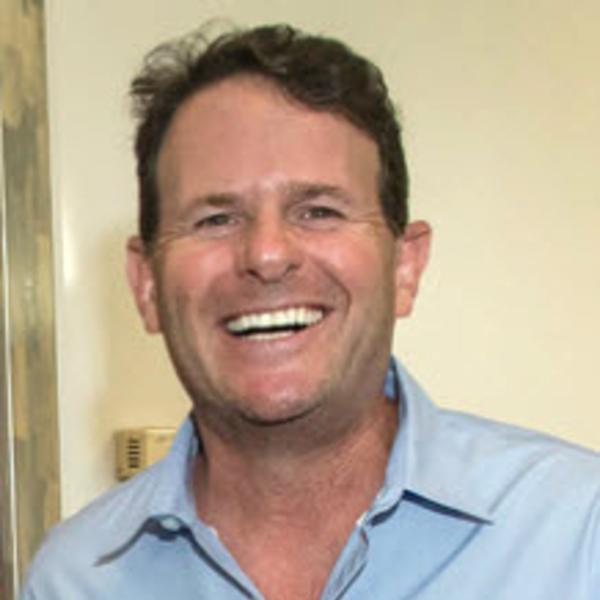