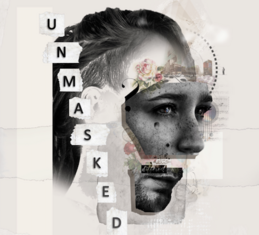 We live in a world of fake news and conspiracy theories. We're getting better at identifying those imperfect 'facts'. Learning to become information-savvy is also part and parcel of our educational system. But are we equally critical of our own assumptions? Of what we take for granted?

This year, our event is dedicated to unmasking what we hold sacred, what we believe, and what we trust: our intuitions and our givens.

Join us! We plan to reveal all... and then some.

A 22-year-old medical student at LAU. Whenever she’s not studying, you’ll find her reading about natural selection or fighting for minority rights. That’s her drive. In a world full of discriminatory mindsets and subliminal animosity, she tries to be the voice of the silenced. She also dared to doubt the norms around her one day. She broke out of her own box, and that was when she found purpose. Her motto is: Be the voice of the unseen, untouched, unheard. A global purpose. You can reach her via: Email: dana.lawand01@lau.edu Instagram: dana.lawand

Eliane El Alam Haddad is a speech therapist and a mom of two who believes that our way of communication shapes who we are. She works with children of all ages. Working, for 18 years, in both daycare & school environments and meeting & interviewing thousands of parents, Eliane believes that each family has its unique language identity. There is no one answer for all. You can reach her via E-mail: Elianealam@gmail.com

Jad Nasr obtained both his dentistry diploma (DDS) and his specialty in pediatric dentistry at the Lebanese University, Faculty of Dental Medicine. In 2013, he followed a "shadowing program" in the United States at the University of Birmingham Alabama "UAB". This program develops the newest therapeutic techniques in pediatric dentistry. He also completed a master’s degree in "Hospital Management and Public Health" at the ESA School of Business during the 2015-2016 academic year. He is currently pursuing his master's degree in biology and dental bio-materials at Saint Joseph University. You can reach him via @kidsairlinepediatricclinic

Wanderer, scientist, science communicator, American-born astronomer and mathematician. Thanks to the guidance of great teachers, Jonathan was blessed to know what he wanted to become early in his life. By fifteen years of age, he boldly told anyone around that he would study 'space stuff'. After working with NASA for almost a decade, he now studies space and artificial intelligence for the Space Science Institute (a remote science institute). Driven to improve the average quality of life for those in need, and believing that every person should have an opportunity to contribute to their community and society, Jonathan is developing a foundation to teach AI to underprivileged and underrepresented people in the MENA region. He is building educational programs to teach AI for all, starting here in Lebanon. You can reach him via: jdfraine@gmail.com

May is a professional independent artist based in Beirut. She is a self-starter who has quickly established a presence in the local scene, mainly since the launch of her YouTube channel/Facebook page in 2017 under the project name “May Goes Solo”. While she pursues producing her own original music, she is a lecturer in Psychology at LAU and other universities across Lebanon. You can reach her via @may.goes.solo

Known for juggling more than one skill and hobby, Naila studied Early Childhood Education at LAU, but also found interest in the fields of filmmaking, theater, and arts; hence spending her free time learning to become an actress, assistant director, special effects makeup artist, art director, costume designer and painter. She graduated in 2015 and made a promise to herself not to be stuck in a boring 9 to 5 job. A promise she kept and that led her to co-founding L3b- لعب, A company dedicated to leveraging the power of serious play in the workplace. Her colleagues refer to her as the Punnovator for playing on words and concepts to create innovative ideas and solutions for challenges around her. You can reach her via: naila@l3b.space https://l3b.space/ https://www.facebook.com/naila.alhares https://www.instagram.com/nailaalhares/

As a Psychology graduate, current Clinical Psychology student, and a volunteer for a great cause, Noura is paving her way through the field of mental health in Lebanon. Born and raised in Beirut, she lived the highs and lows of the country, and carried some of burdens with her over time. Her goal is to reach anyone who might need her help and inspire them on ways to better communicate and understand one another. She has been working on this for a year now as part of Lebanon’s suicide hotline within a cause that has changed the way Lebanese people deal with mental health and emotional wellbeing. She believes that everyone deserves to have a support system, and that’s what has been driving her to get out of bed everyday. You can reach her via Instagram: @nouraamkieh

Ranim Daw graduated with a BS in Biology from LAU, then earned her Master’s degree in Cellular and Molecular Biology from AUB. She has a number of teaching and research experience and is currently a research assistant. She is preoccupied with research findings, books, and movies, especially ones with psychological depth. Her life has become a journey of understanding and experiencing the individual and collective soul, from the microscopic DNA molecules to the furthest planets in the cosmos. You can reach her via: Email: ranimdaw28@gmail.com Instagram: https://www.instagram.com/ranimdaw/

Losing her mom at the age of twelve has affected her life in many ways: more responsibility, less faith, a lot of pain, a bit of fear, many why me’s, a few what if’s, but mostly a sharpened motherly instinct. She first channeled this need to love and nurture to her two younger siblings. Later on, she became a university and school instructor who cares about the physiological and psychological well-being of her students more than their end-of-term grade. In addition to that, she is now a passionate partner of one and a devoted mother of two. Rebecca has been teaching English courses in a number of schools and universities since 2005. She is also a board member of Lactica, an NGO that supports, protects, and promotes breastfeeding in Lebanon.

Soulaf Aburas is an architect with a passion for design. She has worked at reputable design firms such as DLRgroup and Perkins+Will. She has experience in the design of large-scale airport and stadium projects, in addition to mixed used and hospitality projects ranging from hotels to residence located across the Middle East and Asia, particularly in the Gulf. As an accomplished researcher, Soulaf invests time in advancing the fields of industrial robotic arms and material programming with her findings presented in France, U.K. and Autodesk BUILD Space, Boston. She has published, presented findings and participated with entities in Copenhagen, Iaac Barcelona and the United States. She has also invested in the new generation through her teaching experience as professor of architecture at the Lebanese American University. You can reach her via E-mail: soulaf.aburas@alumni.aus.edu

Vicky serves on the editorial board of two scholarly journals and a local Lebanese newspaper. Her research interests range from pre-history to sociopolitical affairs of contemporary cultures and modern-day philosophical interpretations. Vicky Panossian is completing a degree in English Literature at the Lebanese American University where she is also pursuing minors in History and Psychology. An ardent admirer of cats and a proud tea addict, she is a book hoarder who often finds herself awestruck by historical facts in the dusty pages of long-abandoned manuscripts. You can reach her via LinkedIn: https://www.linkedin.com/in/vicky-panossian/

Xriss is a Lebanese-American singer-songwriter, entertainer and activist. After winning a multitude of global singing competitions she began touring the MENA region as the lead singer of 8è Art Entertainment’s “X band". She became a household name after reaching the quarterfinals in the first season of The Voice Arabia in 2012, landing her a management deal with musical tycoons like Quincy Jones, Will.I.Am and Timbaland. This lead her to signing even more management, recording and production contracts in the US, Switzerland and the UK consecutively. Locally known for covering Michael Jackson's “Care About Us” dedicated to the garbage sanitation crisis in Lebanon, Xriss is currently in the process of finalizing her new single and music video “Save Me” and plans on gradually releasing the rest of her music in 2019. You can reach her on all her social media platforms via the handle @xrissofficial.