We’re excited to announce our next event on Saturday 18th May 2019 at the Royal Festival Hall. Join us as we explore the next chapter of our theme #BeyondBorders.

Our mission is to uncover, support and promote ideas worth spreading. TEDxLondon 2019 will continue to seek out the most inspiring and innovative solutions that go beyond limitations, beyond labels, beyond boundaries to create the kind of world we all want to live in.

We are Beyond Borders. We are TEDxLondon. See you in May!

Abhishek Parajuli is a PhD student at the University of Oxford. He completed an MPhil in Comparative Government, also at the University of Oxford and a BA in American Politics from Dartmouth College, where he graduated as the class valedictorian in 2015. Before starting his PhD, Abhishek worked as a Peter Martin Fellow and Editorial Writer at the Financial Times and his writing has also appeared in the Guardian, the Daily Telegraph, The Times of India and the South China Morning Post in Hong Kong.

Amrou Al-Kadhi is a performer, writer and filmmaker. Their memoir on having an intersectional identity, Unicorn: The Memoir of a Muslim Drag Queen, will be released in early October 2019. As of 2019, Amrou has several TV shows in development (one for BBC Drama and one for Channel 4 Comedy). During 2019, Amrou has also written an episode for Kumail Nanjiani & Emily V. Gordon’s upcoming series for Apple (US), Little America, and BBC America’s hotly anticipated series, The Watch, based on the Discworld novels of Sir Terry Pratchett. Amrou has written and directed four short films and has features in development with Film4, the BFI and BBC films. Their journalism has appeared in the Guardian, the Independent, Gay Times, Attitude, CNN and Little White Lies, among other publications.

Beth is a journalist and the author of Choked: The Age of Air Pollution and the Fight for a Cleaner Future. Her writing on everything from health and sustainability to politics, feminism, food and the arts has appeared in publications including the New York Times, the Guardian and National Geographic. She’s a former longtime Associated Press reporter, and has lived in London for more than 18 years.

Choir With No Name

A choir for those who’ve experienced homelessness

The Choir with No Name London is a choir for people who’ve experienced homelessness, run in partnership with Look Ahead. They are a diverse group, united by a lived experience of marginalisation and sing all kinds of music. The Choir with No Name believes singing makes you feel good and restores a sense of self-worth that may have been lost.

Danny Sriskandarajah joined Oxfam GB as Chief Executive in January 2019. He was born in Sri Lanka in the 1970s and was initially raised in a rural community without electricity or running water. His family was displaced by the onset of a brutal civil war and Danny spent time in Papua New Guinea and Australia, where he went to school and university. Danny moved to the UK in 1998 and completed his Masters and Doctorate in international development at Oxford University as a Rhodes Scholar, with the focus of his doctoral thesis being ‘Development, inequality and conflict’. The contrast between the wealth and opportunity of life in the global north with his early years in rural Sri Lanka has given Danny a life-long passion to take on the root causes of poverty. Paul van Zyl was the Executive Secretary of South Africa’s Truth and Reconciliation Commission. He co-founded the International Centre for Transitional Justice, and The Conduit, a home for those committed to improving the world.

Iyiola promotes a new way to use law to rid the world of discrimination. Through her work as Professor of Law at the University of Leeds, she primarily researches EU and Anti-Discrimination Law. In her latest book, Discrimination As Stigma, she suggests a new paradigm for anti-discrimination law - proposing discrimination can be compared to and tackled like a virus.

Professor James Logan is a scientist, television presenter and internationally renowned research leader, with a passion for science and natural history. He is Head of the Department of Disease Control at the London School of Hygiene and Tropical Medicine, and Founder and Director of ARCTEC and Vecotech, two biotech companies. James researches technologies for the control of diseases transmitted by insects, including malaria, Zika and dengue. His work spans from discovery and innovation in the lab, to large scale research involving implementation and evaluation of disease interventions in a number of countries globally. James is a specialist in chemical ecology, exploring how odour can be used to manipulate the behaviour of insects. Currently, he is exploring how animals can be used as biosensors to detect odours associated with disease. James has presented a variety of television programmes for the BBC and Channel 4, including the award winning Embarrassing Bodies.

Dr Jonathan Mijs is a sociologist at London School of Economics and Harvard University, where he earned his Ph.D in 2017. Jonathan’s research describes the beliefs people hold about economic inequality, its causes and political consequences. His research highlights the process through which citizens - especially young citizens - learn about inequality and come to make sense of poverty and wealth.

Dr Kris De Meyer is a neuroscientist at King's College London and his research lies in how people form opinions about high-stakes issues such as climate change, the economy or Brexit. He co-produced Right Between Your Ears, an award-winning documentary about how people can become convinced of something, even if it isn't true. Kris also co-created The Justice Syndicate, an interactive play looking at how we reason, make decisions and deal with our preconceptions - both as an individual and as a group. He regularly speaks on BBC radio and TV about the neuroscience and psychology underpinning polarisation in society, including the recent BBC Radio 4 series How to Disagree.

Growing up in Trinidad as a fourth generation of Indian descent, Dana Mohammed is no stranger to being the other. She started her musical career as Dana Jade, earning glowing reviews for her debut LP. However, as life for marginalized voices became increasingly fraught, it felt imperative to own our collective otherness and counter growing prejudices, hence reclaiming her stage name to her surname Mohammed. Beyond borders Ms.Mohammed’s music is a daring mix of genres, lyrics and sounds that command our attention-calling for change. To quote Iggy Pop; "Whoa! Ms. Mohammed-A Middle Eastern beat into a rockin’ groove!"

Nikesh is the editor of the bestselling essay collection, The Good Immigrant, which won the reader's choice at the Books Are My Bag Awards and co-edited The Good Immigrant USA with Chimene Suleyman (2019). He is also the author of three critically acclaimed novels The One Who Wrote Destiny, Meatspace and Coconut Unlimited; two YA novels, Run, Riot and The Boxer; and co-founder of the literary journal, The Good Journal and The Good Literary Agency. Paul van Zyl served as the Executive Secretary of South Africa’s post-apartheid Truth and Reconciliation Commission. He co-founded the International Centre for Transitional Justice, and The Conduit, a home for those committed to improving the world by harnessing the power of creativity and entrepreneurship.

While reporting on the civil war in Sri Lanka in 2006, journalist Peter Apps was paralysed from the shoulders down in a car accident, aged just 25. Since then, he has continued to travel and write as a global affairs commentator for Reuters, with postings overseas in southern Africa and South Asia. He has covered conflicts and crises, reporting on everything from emerging markets to defense. Of the more than 20 countries he has reported from, over half have been since the injury. Peter is also the founder and executive director of a pop-up think tank, the Project for Study of the 21st Century, a member of the British Army Reserve and an active member of the UK Labour Party.

Dr Seeta Peña Gangadharan is an Assistant Professor at London School of Economics and Political Science. She has written widely on the topics of digital inclusion, privacy, surveillance, data profiling, and social justice. Seeta co-leads Our Data Bodies, a research collective that explores the impacts of data collection and data-driven systems on the lives of marginalised people. Our Data Bodies is interested in what it means and what it takes to refuse and transform data-driven systems of coercion and control. Seeta is also a Visiting Scholar at The New School, an Affiliate at the Data & Society Research Institute, and Affiliated Fellow at the Information Society Project at Yale Law School.

Founder and Executive Director of Glitch

Seyi Akiwowo is the Founder and Executive Director of Glitch, a young not-for-profit organisation determined to end online abuse through education, campaigns and advocacy. Using her lived experienced and expertise Seyi travels the globe developing practical solutions with Governments, NGOs and companies to protect our online public spaces from hate and abuse. Seyi was named Digital Leader of The Year 2019 and is also an Amnesty International’s Human Rights Defender. She is also an inspirational speaker, writer and workshop facilitator who is passionate about leadership. In 2014, Seyi was elected as the youngest, black female Councillor in East London at age 23.

Recording artist and self love advocate

Shocka, aka Kenneth Erhahon, is a recording artist and mental health activist. Shocka started his journey in 2008 when he released the single, Beast on the loose, which led him to joining rap group, Marvel. In 2014, Shocka decided to branch out as an independent artist and released his new single, Self Love, in October 2018. His new single reflects his personal journey with mental health issues and how he has come to terms with these difficulties. Shocka believes self love is part of the cure for mental health issues, such as depression, anxiety and low self image. By teaching someone how to love and appreciate themselves - no matter what their background or identity is - he believes it will drastically improve their ability to go through life positively. Self love is humanities healer.

Susannah Temko is a policy and communications expert focused on highlighting the need for intersex human rights and campaigning for equality for intersex people in medicine and civil society. She speaks and presents at leading universities and institutions, and has appeared in the media, such as being the first intersex face of Dove’s #BeautyPortrait campaigns. In 2015, she was recognised in the Independent on Sunday’s Rainbow List, celebrating the 101 most influential LGBT+ people in the UK. She currently works with intersex organisations in the UK and USA, and at the United Nation High Commission for Refugees.

As an actress with Asperger's Syndrome, Tashi Baiguerra is proud to be a voice for the Autism community through her work. A dreamer, with accolades for both Autistic and non-Autistic roles, Tashi moved to work in the thriving London theatre scene after graduating from the Howard Fine Acting Studio in Melbourne, Australia in 2017. In London, she trained with Frantic Assembly Theatre Company and currently works as a physical theatre performer and folk musician. 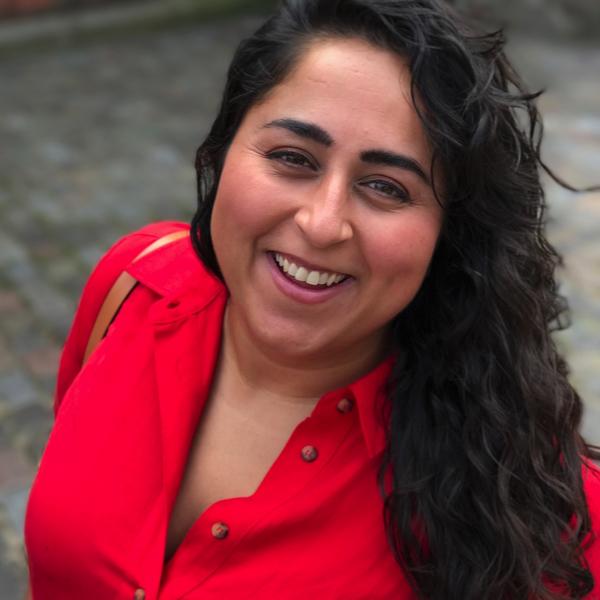