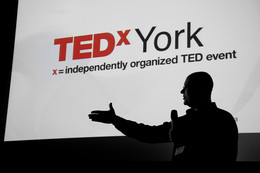 There are three main sessions in our TEDxYork event: Constructed Realities, Enhanced Realities and Blurred Realities.
Firstly we will explore how memories are anchored, how we both engage with and protect ourselves from the world around us, and how technology can affect and reflect different kinds of truth. We will explore the realities from the perspective of others who share our world e.g. the humble bumble bee. We will also learn how we can enhance our reality using our senses in different ways e.g. in food and drink and will discover a new world of choices and consequence.
Finally we will explore the opportunities and threats on the horizon from our accelerating world of immersive and virtual reality, enhanced experiences and artificial intelligence. How does our sense of humanity fit with this new world and should we be excited or very very afraid!

Andy has been in digital for almost 20 years and now heads up New Moon Studios. They are an immersive technology studio based in York. Working with brands such as English Heritage, the National Army Museum, Vodafone and IBM they specialise in using new technologies to engage consumers and to solve real world problems.

Catherine led the creation of two of the BBC's first VR experiences and now curates VR for the UK's leading arts venues with her company, Limina Immersive. Limina provide cultural venues with curated VR content and the software to exhibit it to the public. The company’s goal is to make immersive media more accessible by widening participation in the emerging sector.

Chris Walker is a technologist and designer of interpretive media. He has recently become a spare-time campaigner for data privacy issues.

Jervais Choo is Deputy Director at the National Museum of Singapore, a social history museum with a rich 130 year history that prides itself in being the oldest museum in Singapore, but with the youngest soul. He leads the digital transformation efforts for the museum and has a keen interest in bringing together new methods of bridging experience and understanding through contextual layering and interventions.

Kim is founder and CEO of IN3. She believes that technology should and can be used to create deeper connections and make us more conscious as humans. IN3 is an innovation hub which harnesses the knowledge and learning s of different disciplines to create multi-sensory, immersive experiences, incorporating new technologies to evoke emotion, encourage us to break down barriers, bring awareness to our biases and inspire us to become more mindful of our environment.

Professor Peter Cowling leads two large research labs at the University of York (IGGI and DC Labs) with a team of superintelligent (human!) researchers investigating how games and media can improve (human!) lives. He wants to bring Artificial Intelligence (AI) to people, and is co-writing a book with Rob Wilmot aiming to do just that (www.thebook.ai). Why? If we are to make good decisions about the way AI interacts with our lives, the widest possible range of people need to know more. He has over 25 years' experience of AI decision support systems leading to better roads, more efficient timetables, more profitable steel companies, and more enjoyable opponents in games. Now he is interested in AI for eudaimonia. It's important. Really.

Richard is the founder of Biomimicry UK Innovation Lab, and an award-winning designer, initially schooled in real estate asset management and urban design. He has worked with some of the leading companies around the world and given keynote talks to both academia and industry ranging from product design through to cities and architecture. In his spare time, Richard is the CEO of the startup Smart Stable Limited. He spends most of weekends with his wife and two young sons enjoying the countryside of Yorkshire.

Sharon Reid is Co-owner and Executive Producer at Symbolism Studios, a York-based start up which focuses on immersive and interactive story-telling. She is currently in production on a short film in partnership with the BBC and the University of York, entitled ‘What Is Love?’. The film is a first-of-its-kind in the field of interactive and immersive storytelling and uses new technology that will help inform the future direction of online broadcasting. Sharon Reid is also co-owner of The Imaginarium Studios, the world’s leading performance capture studio, which was responsible for work on some of the biggest productions of recent years, including Star Wars: The Last Jedi, Breathe and the RSC’s new version of The Tempest.

Tim has a background in technology and the creative industries. These are not natural bedfellows. He works on projects ranging from Olympic Opening Ceremonies to pieces of experimental architecture. He began life as a computer programmer and is now a director at Stage One Creative Services, based just outside of York. He is skilled at helping clients incubate creative ideas to the point at which they can be abandoned gracefully or delivered brilliantly. He has an MBA from Durham University and an MSc in Computing and a BA in Geography. Tim was elected as a Fellow of the Royal Society of Arts in 2016.