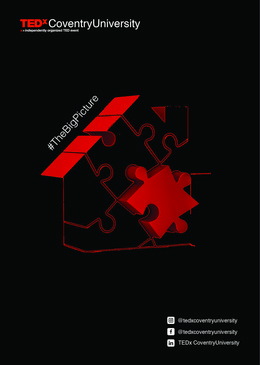 #TheBigPicture is TEDxCoventryUniversity first student-led event. With this theme, we wish to bring people back to thinking about the big picture in life, invite them to take a look at the long run, and the ultimate goals in life. By then hopefully, we can work towards the big goals in life and focus on the bigger picture.

Through this theme, we aim to urge individuals to explore the wider and bigger picture considering various avenues. Some of these include through enterprise, technology, and mental health. To do so, we decided to reach out to the speakers from different backgrounds and areas of expertise to ensure as much as possible the portrayal of a holistic approach to tackling life and the society we live in.

Co-founder and COO of The Social Chain Group

Grace Graham is an award-winning business woman and CEO of Keep It Simple Training Company. She has gained close to 30 years’ experience of working in music, recruitment, and education in the UK, US, and the Middle East, with over 20 years’ experience in leadership and management within the public, private and charity sector. Grace is a Trustee sitting on the Executive Committee of a non-religious church and serves as Vice-chair of Governors at a school, in London. She is the Federation of Small Businesses Lead in Hackney, Enterprise Coach at the University of East London and Expert Faculty Member of Allia Future Business Centre. Grace is a champion for women in business and leadership. When she’s not doing this Grace is mum to a teen, practices Buddhism, Taekwondo, and other things to do with fitness and wellness. She regularly speaks on women’s empowerment, leadership and business, and has served as a judge of business awards

John has been researching into alternative, zero emissions transport and new mobility since 1996, focusing on designs for vehicles for urban scenarios where congestion and air quality tend to be worst. In that time he has founded a new enterprise called Microcab Industries Ltd. (an SME) as an umbrella under which designs can be realised, funding can be applied for and Public Relations and other outputs can be delivered. Concentrating on hydrogen fuel cell electric drivetrains married to lean weight vehicle structures, 3 complete vehicle designs and a total of 14 operational vehicles have been built and demonstrated in trials.

Mark Asquith is a Northern startup founder who found out the hard way that true happiness isn't about what you have, it's about how you feel every single time you open your eyes. A former design agency owner, Mark spends his time building software for podcasters whilst trying to understand exactly how the world works through the lens of a restless mind and inquisitive nature.

Dr Mike Bromfield, a Flight Safety Researcher at Coventry University, is a former Westland Helicopters technologist. A BSC in Aeronautical Engineering and a PhD in flight Safety demonstrates Mike’s academic background in this field. A member of the UK Flight safety Committee who’s achievements were recognised by the UK Light Aircraft Association.

Prisca is the Founder of Moyesa & Co., a social-first marketing agency, that helps brands connect with culture using creative concepts and production. Alongside running the agency Prisca is a Creative Camp Tutor helping students master briefs alongside Ideas Foundation for companies such as BBC and Channel 4. Prior to shifting the focus to Moyesa & Co., Prisca got her start consulting freelancers and startups, where she is best known for culturally attuned marketing strategies and creative work across a variety of industries including fashion, music, publishing, poetry, STEM and healthcare.

Zamaan Ismail is a student, magician and illusionist and is currently studying Medical and Pharmacological Science at Coventry University entering his final year. Zamaan started performing magic from the age of 9; now at just 21, he is already being viewed by millions worldwide. Zamaan has performed his magic on live TV shows on LFC TV, Sky Sports and Soccer AM. He has also performed for a myriad of celebrities, actors, sporting icons and music artists including Floyd Mayweather, Tony Bellew, Daniel Sturridge, Jordan Henderson, Raheem Sterling, DJ Ironik, Ashley Walters, Doc Brown, Ricki Brazil and many more including Youtubers like Calfreezy, Manny, ReevHD and Konstantin. He has also featured various Youtube channels like Rebel FC and Slash Football. His unique style of modern magic, mixed with mind reading and mentalism, has fascinated viewers worldwide. He has developed a global audience and built a fan base that stretches as far as Asia and New Zealand.