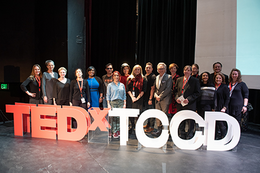 Amber Meyers, M.A., Communication Faculty and Autism Activist, seeks to inspire action in reaching the untapped and seemingly invisible workforce of the autism community. Amber is a Speech Instructor at Tarrant County College. She shares research and stories of success in matching employer needs to a highly-skilled yet underutilized talent pool.

Gabino Martinez, artist, performs his highly entertaining live speed painting. Gabino's art is fast, vibrant and choreographed to music. His art involves intense dedication of time and focus in the development process for each live performance. Gabino is a self taught artist who brings an explosive experience to a live show with music that brings a large blank canvas to life and becomes a beautiful piece of art.

Hyun Jung (Jenna) Chang, M.F.A, is a dance artist who is passionate about sharing the joy and power of unity through dance. After training under Dr. Choi at TCC NE, she began her journey to become a dance educator and transferred to Texas Woman's University, obtaining both her B.A. and M.F.A. in Dance. Chang is an Associate Professor of dance at TCC NE and is a fluid mover with background in hip hop, modern, jazz, ballet, contact improvisation and traditional Korean dance. As a performer and choreographer, Chang's interest lies in the cross-section of dance/movement and her identity as a young Christian Korean-American woman of the 21st century. She is excited to grow in her career with her mentor, peers, students, and most importantly, her dance family, Movers Unlimited. Recently, Chang performed "괴다; The Memory of Love," a Korean contemporary dance work, at Dallas Dances for kNOwBOX dance at the Moody Performance Hall.

Joaquín Zihuatanejo is a poet, spoken word artist, and award-winning teacher. Born and raised in the barrio of East Dallas, in his work Joaquín strives to capture the duality of the Chicano culture. Sometimes brutal, but always honest his work depicts the essence of barrio life, writing about a youth that existed somewhere between the streets of the barrio and the dream wanderings of a boy who found refuge in a world of stories and poems.

Linda Quinn, Ph.D., is a dancer, actress, and dean at Tarrant County College Northeast campus who enjoys the process of fusing different art forms to express human experience. Dr. Quinn first began teaching at the age of 18 as a Disco Dance instructor and eventually earned a Ph.D. in Dance with an emphasis in Humanities. Her favorite topic is the building of community, with movement as the common thread. She believes that everyone can find creative, community building expression through movement.

Méroudjie Denis, Ph.D., is a Licensed Psychologist, Licensed Master Social Worker and a School Psychologist, working at the intersection of mental health and education in the non-profit sector. Dr. Denis holds a dual role in her current position as a clinical multilingual psychologist and as the primary educational consultant at Momentous Institute. Momentous Institute is known as one of the leading non-profit organizations in the country focused on integrating mental health in school systems through groundbreaking social emotional health curriculum development and training. Formerly, Dr. Denis worked as an educator serving pre-school aged children with special needs. Her passion, coupled with her multifaceted background has motivated Dr. Denis to become a strong advocate for children and education.

Rebekah Charleston is the Executive Director of Valiant Hearts, a consultant with the National Criminal Justice Training Center, mother, honors graduate student, and advocate for victims of human trafficking. She is passionate about this issue because at the age of 17 she ran away and became a victim of human trafficking for more than ten years. She had multiple traffickers and was not able to escape until the federal authorities finally became involved. As a survivor, Rebekah has wisdom to impart and a story that will help you understand the issue, as well as shedding light on what happens here in America. Rebekah is the recipient of several awards, including the Survivor Leader Award in 2016, and has been featured in multiple media opportunities, including Deadline Crimes. Rebekah's story is one of hope and restoration.

Launched from the overwhelming response to the NY Times best seller, Same Kind of Different as Me, the Same Kind Foundation has become the ‘911’ for homeless individuals and the agencies who serve them. Ron Hall was a successful art dealer and his wife Debbie seemly had the perfect life. But their faith and family were tested by extreme pain. It was then an unlikely bond with a dangerous homeless drifter named ‘Suicide’ led them on a crazy journey. The book is now a major motion picture starring Renee Zellwinger, Greg Kinnear, Djimon Hounsou, Jon Voight and Olivia Holt. And now, Ron’s newest book, ‘Workin’ Our Way Home’ as told in both Ron and Denver’s unique voice about the incredible true story of the ten years they lived together after the original Same Kind story.

Vincent "Vinnie" Bradford, M.A., is an Olympian in the sport of fencing, a teacher in kinesiology, a fencing coach and a native Ft. Worthian. Vinnie is a graduate of San Jose State University where she won National Collegiate Championship titles in foil in 1975 and 1977. She was U.S. Champion in foil in 1984 and in épée in 1982-84 and 1986. Bradford was the first woman to win US titles in two weapons in the same year. She has competed in three Pan American Games (1979, 1983, 1987) and was a member of the 1984 U.S. Olympic women's foil team. Bradford earned her Master's degree from UT Austin where she coached the fencing club, in 1992 she became the Assistant Director of the US Fencing Association Coaches College, and is the second woman in the U.S. to earn a Fencing Master Certification in 2001. Currently, she teaches at Tarrant County College, South Campus Department of Kinesiology. Vinnie describes the historical progress women have made opening doors closed to them in sport.