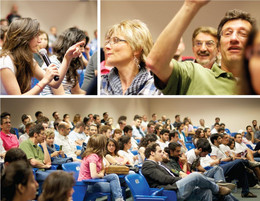 One of the TEDtalks we screened yesterday triggered intense discussions. The ideas and beliefs shared were from all extremes and walks of life. Yes, some were even pro-dictatorship and physical violence.

Yesterday marked our very first TEDxBeirutSalon at LAU, Beirut. With these Salons, we’re bringing you together once a month until the main TEDxBeirut in September. And yesterday we brought together 150 of you. Thank you all for coming, you made it a great success. Discussions included :-)

The talk that triggered the intense discussion was Derek Sivers’s How to start a movement. Somehow, the discussion seemed to gravitate towards: What defines a leader? And who’s more worthy of recognition, the leader or the followers? Watch this 3 minute talk, and then come back to hear my take on this. Go ahead, I’ll wait.

I don’t believe a leader is someone that people follow. In Derek’s talk, what the first lone nut did is simple. He showed everyone that nothing bad will happen to him if he danced on the beach. No consequences. Of course this by itself doesn’t start a movement. People will not get up and start dancing just because he did. There’s another secret ingredient.

Everyone got up and started dancing because they all really wanted to dance in the first place. And because they were afraid… no one did it.

A leader is born when he does something that a lot of people already want to do. He uses himself as an example and abolishes the fear. People do what he’s doing not because he’s telling them what to do. It’s because he’s showing them that it’s OK to do what they’ve always wanted to do. He creates a safety net.

If something goes wrong, he’s the one most likely to suffer the consequences. And so the followers feel safe.

And so this changes the concept of a leader and follower. A leader doesn’t lead, and a follower doesn’t follow. They’re just people doing what they’ve always wanted to do, but wouldn’t (Mostly out of fear).

The TEDxBeirut team isn’t doing this because our curator Patricia is telling us what to do. We’re doing it because each one of us already wanted to do it so much.