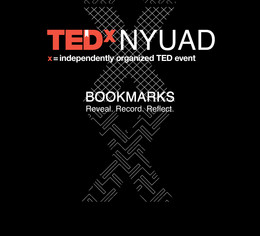 We all have bookmarks in our lives – they could be events, people, ideas, relationships, challenges or achievements. Our speakers for this edition of the conference will share some of these bookmarks with you with the hope that they may inspire others.

This year, we have speakers from the United States, Pakistan, Australia, Kenya, Mexico, Germany, and Philippines. They will be sharing their experiences, observations, ideas and research that have shaped the way they look at the world around them.

Armaghan is a civil engineer by profession, but an artist by heart. He has grown up in Pakistan with an interest in theater from a young age. He has directed, acted, and produced over 25 internationally and nationally staged theatrical productions in his lifetime. Over the same years, he has also had a speech impediment which has given him further perspective into the restrictions people have in accomplishing their plans. Using these experiences, Armaghan will be introducing a simple, yet forgotten, method of achieving one’s goals.

Dr. Birga M. Schumpe is a psychology researcher at NYUAD. Dr. Schumpe earned her degree in Germany, where she also worked as a clinical psychologist for several years allowing her to gain insights into the human mind and its peculiarities. Her current research focuses on why and under which conditions individuals chose extreme means to pursue their goals, and how these preferences can be redirected towards adopting less severe means. Drawing from her own research as well as from of other scientific findings, Dr. Schumpe will present several examples of how people use notions of pain to infer the value of an action or object. You might find yourself in some of these examples and perhaps you would like to find out why you keep choosing the painful route.

Farzan Ahmad Khan is currently a senior at New York University Abu Dhabi studying Electrical Engineering and a proud captain of the NYUAD Cricket Team. He has made the most out of his time at the university by serving as a Residential Assistant, leading student interest groups and serving as a Senator as part of Student Government. Farzan wants to use his TEDxNYUAD talk to inspire an active reevaluation of the way we think about failure. Our perception of failure can have a major effect on our mental well-being and it is easy to pick up negative practices that tend to go on in the background every time we are faced with a struggle. Farzan hopes that his talk will challenge the audience to look at their own instances of failure and to place them within a broader context of acceptance instead of shame.

Gaby Flores is currently a senior at New York University of Abu Dhabi studying literature and creative writing, while continuing to share her love for music with people as one of Howler Radio’s DJs. During her TEDx talk, Gaby will finally reveal the secrets to her award-winning, homegrown comedy… and how it became her greatest weakness before becoming her greatest strength. She discusses how one’s greatest trait does not have to be their only trait and emphasizes on how people can find strength in vulnerability. Life, in whatever form it may be, responds best when people allow themselves to open up to it. Join Gaby on a whole journey involving vulnerability, self-deprecation and cake.

Luis Gonzalez is a sophomore from Mexico majoring in Political Science. In his first year, Luis learned random phrases in different languages as a way to start conversations with people. From there, he learned the importance of conversation in diverse communities such as this university. In his talk, Luis explores how we can use conversation in diverse contexts to develop our own identities, learn about others and build bridges in between. From being challenged in his beliefs to creating links between Arabic and Spanish cultures, Luis reveals the power of conversation in learning as well as unlearning about various things. He unravels how he was able to use conversation to adapt to his new environment, embrace his Mexican identity and make friends from all over the world.

Mohammad Ali is a freshman at NYU Abu Dhabi from Pakistan, majoring in Legal studies and Philosophy. Ali has also done a lot of social work for women’s empowerment, transgender rights and the inclusion of people with mental and physical disabilities. He is passionate about uplifting socially marginalized groups and establishing equality in society. Ali’s talk is about the significance of treating people with disabilities equally and including them in the mainstream discourse. Ali argues that rather than the disabilities themselves, social biases and stigmas shackle people with disabilities and hinder their ability to flourish in society. His talk is filled with personal anecdotes and his insights on this complex issue.

Nat Launder is a sophomore at New York University Abu Dhabi majoring in Biology with a specialization in Brain and Cognitive Science and a minor in Psychology. In her talk Invisible Injuries – when a concussion is more than ‘just a concussion’ – Nat will speak about the difficulties she faced and insights she gained when confronted with an invisible injury. She will challenge the audience to re-think their perspective on what it means to be injured in a way that cannot be seen, measured or definitively diagnosed. Invisible Injuries will break the silence and stigma surrounding invisible injuries and challenge the audience to face that which they cannot see or understand.

Rabiya is a Pakistani junior at New York University’s Abu Dhabi Campus double majoring in both Social Research and Public Policy and Legal Studies with a minor in Arabic Language. In her talk, Rabiya will speak about her journey of coming from a culturally conservative family where she was not allowed to pursue an education to attending one of the most selective universities in the world. She will explore her relationship with her dream of getting an education and her struggles of mental illness and chronic pain throughout her journey to show how achieving your dream is simply the first step. There is still much to come afterwards.

Currently a Social Science instructor at NYU Abu Dhabi, Saba has over 7 years of experience in the financial industry and incorporates her experience into her teaching in an effort to bridge the gap between academia and the corporate world. Holder of BSc Honors in Finance and Banking, Alumni of the NYU School of Professional Studies, former Sheikh Mohammed Bin Zayed Scholar and recipient of the Prime Minister’s Academic Excellence Award, Saba has multiple successes under her belt. It’s her journey and not solely her successes, that make Saba’s story particularly fascinating. In her talk, Saba guides us through her path as a woman and how she challenged the norms of her society.

Thaddeus currently serves as Residential College Director at NYU Abu Dhabi, where he directs all aspects of the programs and services for the A2 Residential College, housing the first year student population. His talk on Creating Vision: Patience, Wisdom, and a Preference for the People will explore the concept of vision, the power it holds, and what it requires of the visionary. Vision will be explored through the Thaddeus’ lens and lived experience. With world peace as the conduit, Thaddeus will challenge the audience to dream and to walk through the process that can make those dreams come true. Creating Vision will share how vision creates humility by requiring patience; vision shapes the future by requiring wisdom; and most importantly how vision brings people together by requiring a preference for the people.

Waseem is a sophomore, born and raised in Kenya. A passionate dancer and food enthusiast, he plans to major in Psychology and minor in Film and Theatre. In his talk, Waseem will share his experience of being a mixed race in a homogeneous community. He discusses how biracial identities challenge society’s inherent tendency to categorize. He questions social group markers and their role in a community. Should race be a defining factor in one’s identity? What if you don’t really fit into any specific race? How do racial stereotypes affect people of mixed race? Drawing on his personal experience of not fitting into any of the two races, Waseem explores the problem of treating race as the defining aspect of one’s identity.