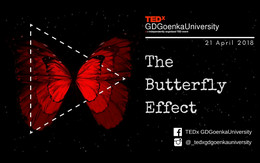 It has been said that something as small as the flutter of a butterfly’s wing can ultimately cause a typhoon halfway around the world – ‘The Butterfly Effect’
The idea of the quote is that everything changes something, whether we can see the change in advance or not. Every thought we allow in our minds changes our brain chemistry. Each flap of a butterfly wing changes…. something!
Sometimes the smallest comment can trigger a change in thinking, a new path, a revolution in understanding. The smallest action can make or break a day; a smile can save a life. Thus, our theme focuses on seizing the day, taking risks and to never underestimate the power of a touch, a smile, a kind word, a listening ear, an honest compliment, or the smallest act of caring, all of which have the potential to turn a life around.

Avani Bansal finished her Masters in Law from Harvard Law School and B.C.L. and M.Phil in Law from University of Oxford. She is currently practicing as an Advocate in the Supreme Court of India, New Delhi. She won eight gold medals at Hidayatullah National Law University (Raipur, India) where she pursued B.A.LL.B. (Honours). At Harvard, Avani received the Dean’s Award for Community Leadership and was the elected LL.M. Class Representative. At Oxford, she presided over Oxford Lawyers Without Borders, while being an Associate Editor with the Oxford University Commonwealth Law Journal. Avani runs a legal awareness programme called ‘HamaraKanoon’ to explain important laws in simple language in Hindi through a short video format and is working on her upcoming book ‘The Law School Journey’ to be published by Eastern Book Company. She is passionate about social change and politics and is currently the President of All India Professionals Congress (AIPC), Delhi East.

Avik is a high-energy facilitator and OD specialist with expertise in Coaching, Personality Type Theories, and Performance Enhancement Tools, Top team Alignment, Cultural Transformation, and Energizing an Entire System for Exponential Growth. He is currently working on Top Team Effectiveness, Leadership Development for HiPo’s, Creativity and Problem Solving, and LSIP Interventions using Appreciative Inquiry. His background in Theater adds a powerful impact to his facilitation style and creates a dynamic learning environment. He learned about theater from BadalSircar, his grandfather. As a facilitator, his style is highly energetic and engaging. He is equally adept in the classroom and in the outdoors and has worked with GETs as well as with senior professionals with more than 30 years of experience. Avik brings elements of coaching for effectively helping participants to find the right answer for themselves and to take the relevant action.

Founder of an organisation EkkPahel, senior blogger at Sablog Magazine, social entrepreneur, motivational speaker. He started EkkPahel in April 2016 with the motive of putting efforts in uplifting the underprivileged class of the society. He believes in being the change and not waiting for one to happen. His organization had started off with just three people in it but has now has more than 180 enthusiastic young minds across India including New delhi, Bengaluru, Kolkata, Chandigarh, Patna, Ara, Dhanbad,Forbesganj, Pune, Greater Noida and many more. He with his team has organized Police-public relationship rallies to strengthen the bonds and trust between them. At the same time, he informed the sewage workers of Bihar of The Swachh Bharat campaign and joined hands with them to make India cleaner. His effort got recognition from Swachh Bharat urban.

Dinika was born is Mumbai, and brought up in Delhi. She went to her dream city, Los Angeles to pursue her Business Administration at the University of Southern California, where her idea of Nutty Gritties was conceptualized and awarded at the Entrepreneurship program. DRB Foods was founded with a mission to promote better health. Nutty Gritties, the first brand launched, is a range of premium dry fruits in healthy basics and exotics. Almost 9 years later, the brand is now spread across several channels like the railways, airlines, organized retail, E-commerce, corporates and premium retail. Building the brand on innovation, Dinika has received several recognitions for entrepreneurship from prestigious institutions like Walmart, Amity University, and Delhi Management Association. Nutty Gritties has been awarded for being the Most innovative product from The Upper Crust show, Food & Grocery Forum & International Nut & Dried food council.

Dr. Vishal Rao is a Bangalore based oncologist. He has trained in Oncology at one of the most prestigious cancer institutes of India, the Tata Memorial Hospital at Mumbai. He is also a Visiting Scholar at the Department of Otolaryngology in the University of Pittsburgh School of Medicine, USA, a Consultant at the Institute of Public Health and a Director of the Cancer Prevention and Tobacco Control Project with W.H.O Tobacco Free Initiavespartners . The other positions held by Dr. Vishal Rao are: Member of the Union for International Cancer control (UICC) Globalink – Global Tobacco Control; a Member of National Executive Committee for the Foundation of Head and Neck Oncology (FHNO); Executive Board Member of the State Association for Otolaryngology – Head Neck Surgery, Karnataka and a Member of the Action Council against Tobacco (ACT) – India.

Gauri Angrish is the Founder & CEO of CAREDOSE , a MedTech company that develops hardware and software to ensure medicine adherence in patients, whilst creating big data for healthcare entities and public health organizations. She has received 2 patents, is a certified NASDAQ Milestone Maker and has been selected in the Forbes Asia top 30 under 30 list for Healthcare and Science. With a belief that science and healthcare have the power to impact and alleviate multiple lives, Gauri studied Biotechnology with focus on cardiac stem cells from the University of Nottingham. Gauri experienced the business side of healthcare by working in the Pharmaceutical & Medical Product vertical at McKinsey & Company. As she lacked business know-how and experience, she started her entrepreneurial journey by starting and running a retail pharmacy. With this exposure, guidance from her father and after creating a foothold in the industry she started the research & development of the CAREDOSE system.

Magan Kalra is an internationally renowned Business Growth Coach acknowledged by numerous Fortune 500 companies. He has worked and trained individuals and teams across cultures in Asia, America, Europe, Middle East and South Africa with over 60 different nationalities. Magan has redefined the way organizations achieve business growth by transforming the people side of business. In his career spanning over 18 years, he has trained and coached more than 100,000 professionals and has been ranked amongst the Top 10 trainers in the world by DC & Associates. Magan’s core belief is that ‘personal development leads to business growth’ and that’s exactly what his clients consistently achieve through his high-impact sessions. His interventions deliver tangible results in business and with people.

Nasir khan studied Bachelor of Business Administration at GD Goenka University and is currently working as the Sarpanch of a village called Bijopur which is in Ballabgarh Tehsil, Faridabad, Haryana. He received the UcchaYuvaShikshit award on 21st January 2018. He has also built 96 toilets in his village has made it an odf(open defecation free) village. He believes that, “To understand the system you need to get into the system. When you get into the system you understand how things happen, how things work. You understand if something happens, what is the reason behind it, what is the role of each department”. His vision for his village is to ensure there is maximum literacy and improve the one school in his village which has had zero percent result in the past.

Nitesh Yadav, is a 16 Year Old Android Developer. His first app, ‘MeraKanharka’, helps connect his village to digital India, giving them access to the outside world. He takes Skype classes for students at his village and others on various social media platforms regularly, teaching them about web developing at no cost. He is also currently working on his software development company named Techsicon that aims to promote any business as a brand to the global level. He has been featured In 70+ News Magazines along with Your Story and Wittyfeed. He has been invited by many tech giants like NASSCOM and Google. He has recently launched an AI Powered Chatbot which will help Facebook users to study just while using Facebook. He is working to spread his vision to empower technology in India.

Founder of Letters Of Love

Pooja is the Founder of Letters of Love and has been the driving force behind the movement ever since its inception in October, 2015. Letters of Love is a global youth-led initiative and a member of United Nations High Commissioner for Refugees' #WithRefugees Coalition. With a team of 25 with an average age of 22 across 11 countries, Letters of Love aim to make a difference to refugee crises, one smile at a time. Founded in 2015 after the gruelling Syrian War & Refugee crisis caught attention of global media and created international outrage, a team of 30 volunteers across 10 countries helped actualise an idea of spreading smiles across refugee children by sending them handwritten postcards for New Years. In addition to this Pooja Pradeep was the Chapter Director of India and the current India Representative for The History Project, a Cambridge Social Venture that uses juxtaposed narratives of Indo-Pak History as a tool to inspire critical thinking & empathy amongst students.

A ‘Lifestyle Coach’ at UPES (university of petroleum and energy studies) but lovingly christened by the students and faculty as the ‘Campus Nani’. Her role included counselling students on handling stress, peer pressure, parental pressure and relationship issues. She was actively involved with academic underperformers, helping them through mentoring sessions in identifying the underlying causes for the suboptimal outcomes. She had conducted several workshops for students, faculty and staff on a range of subjects which inter alia included ‘Yogic way of Life’, ‘Stress Control’, ‘Addictions’, ’Finding Bliss in Workplace’ and ‘Hygiene and Habits’. Besides, she was also involved in counselling parents who are often the major contributors to the emotional well-being of the students. Other than being a counsellor she's also a ‘Skin Specialist’, volunteer at ‘Make a Wish’ Foundation and has held many workshops on lifestyle issues at several organizations like SBI, BSNL, Pearl Academy and more.

Shinjini began her training in kathak dance at the tender age of five and began performing at the age of eight. She has performed at prestigious festivals such as Khajuraho dance festival, SankatMochanSamaroh, Taj Mahotsava, ChakradharSamaroh, Kalidas Festival, KathakMahotsava etc. She has given numerous solo performances and group shows in various cities of India and abroad such as New York, Houston, Westchester, Austin, Milwaukee, Bangkok to name a few, and has received affectionate appreciation and blessings by the audience in the short span of her career.Recently, she has performed a dance sequence in the movie Jaanisaar, directed by Sh.Muzaffar Ali ji under the dance direction of Pt.BirjuMaharajji. Receiving warm appreciation, she has begun exploring the field of acting as well. Her most recent project is a Kathak based solo song composed by Pt.Bickram Ghosh for the Bengali movie HarHarByomkesh which completed 100 days in the cinema halls.

Vaneet Chaudhary is a business undergraduate from Universal Business School, Mumbai. Currently staying in Gurgaon, he plays the ukulele and fuses classical raags and modern music together to put it on his social media pages, Ukewala. He is also an Advanced Pranic Healer and has been practicing Pranic Healing for 3 years. 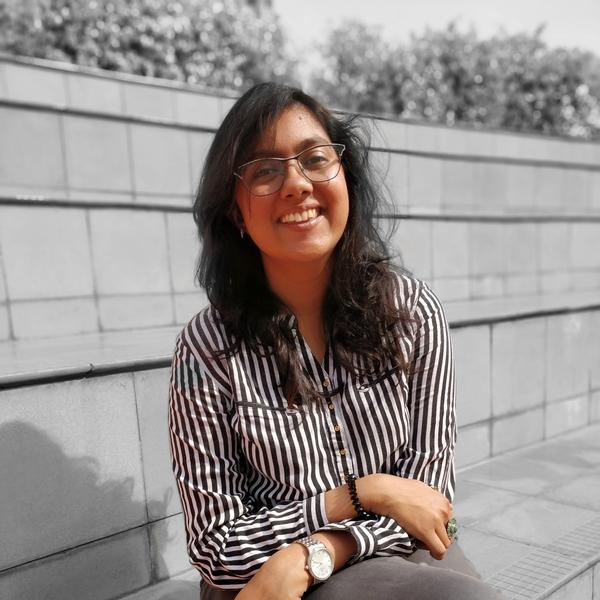 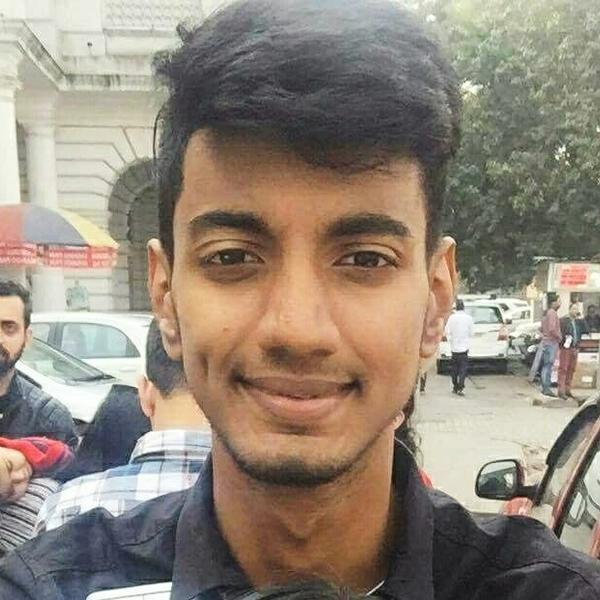