The main task of TEDxMariupol is to find a new role for the Donbas in Ukrainian society, to generate creative ideas for the development of the region, to create a positive atmosphere for professional and personal development among the local population, and to reduce the influence of stereotypes. The speeches of the speakers will contribute to a new look at the phenomenon of modern Donbas, look back and evaluate the results achieved, strengthen the vector of the region's development and its place in the country.

Journalist and coordinator of the Center for Public Control “Dyyi-Kramatorsk” (Actions-Kramatorsk).

Journalist and coordinator of the Center for Public Control “Dyyi-Kramatorsk” (Actions-Kramatorsk). As a journalist, he specializes on anti-corruption investigations and coverage of local self-government activities, as the coordinates of the Center he is sure that a community should not just only control and criticize the authorities, but also propose concrete solutions of the problem, and sometimes, takes over the responsibility. The theme of the speech: "Dream globally, act locally."

Artem Kornetsky Real guru of social entrepreneurship in Ukraine will be a speaker at the TEDxMariupol conference. Artem Kornetsky - PhD., founder of the course on social entrepreneurship at the Prometheus resource. The Co- founder of the School of ME. Associate professor of UCU. Invited lecturer of NaUKMA. Fulbright Programm Researcher at DePaul University (USA). Topic of the speech: "Why a company have to become social?"

The winner of the Vofafone accelerator, a co-owner of the passenger transportation service of the Ride Now way. The founder of MyAviaHelp.com Legal Aid Services

The winner of the Vofafone accelerator, a co-owner of the passenger transportation service of the Ride Now way. The founder of MyAviaHelp.com Legal Aid Services Topic of the speech: "Sharing Economy".

Kyiv poet, musician, manager, public figure, founder of the group Nesprosta, co-founder of "42 Event-Agency” and co-founder of the Foundation for Social Innovations “ Z krayiny v Ukrainu” ("From Country to Ukraine)". Native and one of the most beloved cities - Kyiv. Thanks to his activities, Denis travels a lot and visits different cities of Ukraine. The number of his favorite cities are increased to 100 towns and Mariupol is at the list of the five all-time favourite cities. The dozens of startups in different fields are on the account of Denis - from culture to business and education. Among them are the “Vertical” Creative Association, about 40 festivals in the East of Ukraine, "Discover Ukraine. In the meantime, Denis organized the best Ukrainian festival "Alfa Jazz Fest" jointly with the"42" Event Agency, becomes the part of the Eurovision 2017 team and acts as a coach of event managers at the Laboratory 42. The topic of the speech: "Youth from the East will change Ukraine".

Internal displaced person, entrepreneur, founder of the "Lekontina chocolate workshop" café. This is a man who lost everything through a military conflict in the East of Ukraine, but does not wait for second chance from the life and creates new opportunities for himself. Theme of the speech: "Success through difficulties overcoming".

The student of the Mariupol Technical Lyceum, Kateryna Malkina, the silver medal winner of the World Olympiad on Ecology in the Netherlands.

The student of the Mariupol Technical Lyceum, Kateryna Malkina, the silver medal winner of the World Olympiad on Ecology in the Netherlands, presented her scientific project on the problem of utilization of polyethylene and conservation of natural resources. A schoolgirl proposed to recycle plastic waste using beetles larvaes. Among the 200 participants from fifteen countries of the world, the idea of a 14-year-old Ukrainian girl attracted the attention of scientists. But, unfortunately, at the homeland, the schoolgirl was not interested to anyone, so the girl, and her research advisor, will cooperate with foreign investors. Topic of the speech: "Sciencу has no certain age or place

Ukrainian journalist. Chief editor of the "Donbass News” site " In April 2014, he was included at the list of "100 Heroes of Information", which was published for the first time ever by the "Reporters Without Borders" organization. In October 2014, Oleksyi Matsuka was awarded the International Prize for the International Press Freedom Award by the Canadian Journalists for Free Expression Organisation The topic of the speech: "Free Expression "

Veteran of ATO, entrepreneur, traveller. He is the person who has lost everything because of a military conflict in the East of Ukraine, and despite this, was able to start his own business with his partners, opening a cafe in a front-line city. After that he achieved his dream and traveled around 11 European countries by catch rides. Topic of the speech: "The Way to the Dream through a War Conflict." 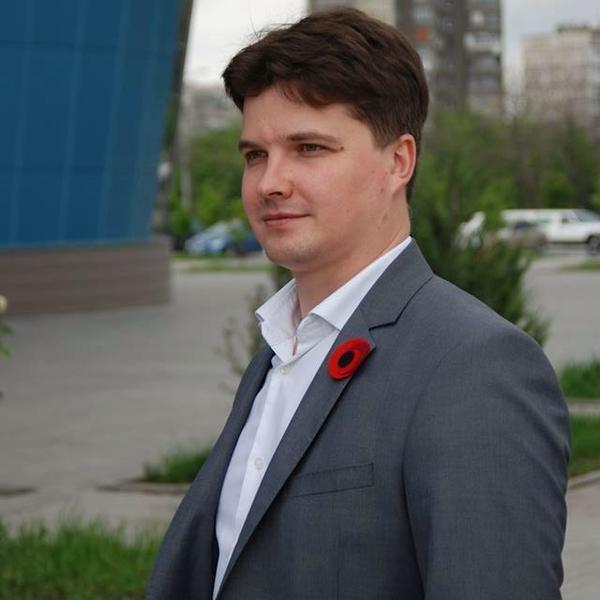