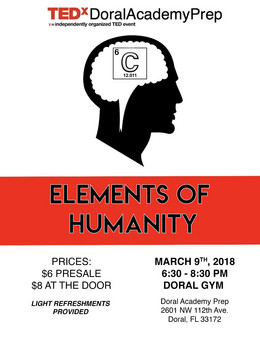 The human body is comprised of six elements, yet the core of humanity is far richer: levity, innovation, passion, empathy, resilience, and resolve. Join our six speakers as they delve deep into what makes us who we are.

Catalina Cordoba, better known as “Cata,” was born in Quito, Ecuador. Cata moved from Quito to Miami, Florida four months after her birth. She’s been a part of the Doral Academy Student Council for three years and is an Athletic Trainer for the Doral Athletic Program. For several years, she was a competitive horseback rider. She wants to major in Political Science and hopes to attend the University of Michigan. Her goal is to one day work in the United Nations to fight for human rights and work toward world peace.

Gabriel is a junior who moved to the United States four years ago. He enjoys puzzles, R&B music, going for runs, and aroma therapy diffusers. As Vice President of Doral Academy’s Computer Science Club, he spends his days programming and learning about technology. Besides having a love for science, he is a man of faith, who leaves his destiny to God’s will. He plans to get a PhD in Statistics and use his programming skills to help solve some of the problems the future has in store. For now, he wants to inspire his generation to plan for the future.

Gabriella’s love for classical music began ever since she started playing the viola in 7 th grade. With her diverse music interests such as metal, rock, and jazz, she knows that classical music is a different kind of genre. She feels that everyone should understand that this genre has a story/background to every piece. Gabriella is pushing for people to listen to and interact with classic music through various community projects: attending summer music academies such as The Opera Atelier and the Chloe Trevor Music Academy, and – her upcoming project – working with University of Miami FROST School of Music’s outreach program to teach children in the Ronald Mcdonald House, and prospectively, in a juvenile center.

Isabella Gomez is a high achieving junior who was born and raised in Venezuela, and moved to the United States in 2014. In her free time, she enjoys serving her community and spending time with her friends. A determined and outgoing young woman, Isabella holds a passion for the arts and sciences. As a volunteer at her local church, she teaches catechism to children, preparing them for their First Communion. Isabella participates in extracurricular activities, which range from honor societies to swimming. She continues to strive to become a well-rounded student and active member of her communities.

Nathalie “Nat” Ordonez is a forthright, outspoken, Hispanic-American meme connoisseur born and raised in the USA. She is a senior at Doral Performing Arts and Entertainment Academy, and plans to major in Acting in college. Ideologically speaking for Nat, there are no such things as societal boundaries. She found her passion for public speaking when she joined Model United Nations, where she now proudly serves as President of the Doral Academy team. In 2016, Nat had the privilege to speak at TEDxDoralAcademyPrep on the topic of discovering love. Now returning as a veteran, she hopes to shine a new light on something that at first may seem shallow, but could really be interpreted with deeper meaning.

Thomas is a Brazilian born junior who, on the surface, seems like a goofy, loud, carefree individual (and well, it’s mostly true) – but what many don’t know is how much he prides himself on setting the bar high and doing the most he can to make his goals become a reality. While mostly a STEM nerd, he has also taken a strong liking to writing, public speaking, and debating. The cheerful, motivated, and extroverted Thomas people know today acts this way for a reason many would not expect – his hardships. 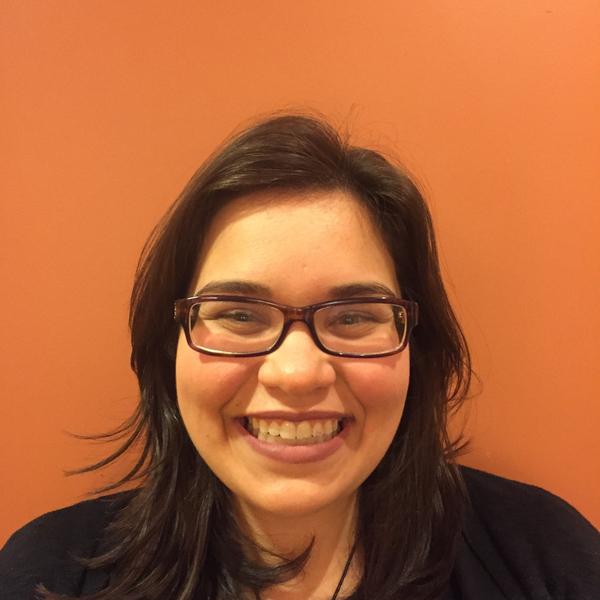 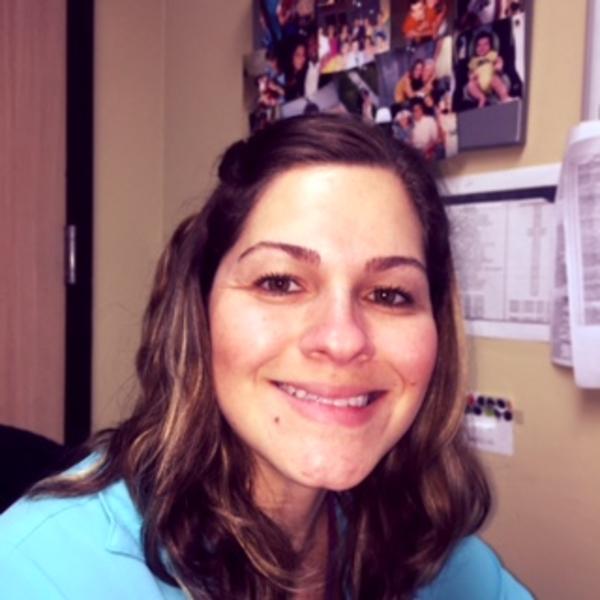