Most problems today seem scary. It may seem like the world is going to end soon. But actually many of these problems can be easily tackled – solutions for these exist! Its just that they may be unseen, unheard, unscaled or unfunded. Never in history has there been a time when it’s been so easy to find solutions to problems that plague us, its just that we have been blinded temporarily. How the road ahead will turn out depends greatly on the narratives we chose to apply – to understand today’s needs, to imagine tomorrow’s and to walk with a collective and responsible way forward.

At TEDxChennai we have a role to play here. So for TEDxChennai 2018, we are going to carefully curate conversations and experiences that can bring out the best of social, creative, technological and scientific developments that are driving our future forward. We are bringing together the crazy ones and the quiet ones for a journey that awakens them. Its time to bring that change in perspective forward – to fix the blocks that slow us down and to march on ahead.

In the spirit of ideas worth spreading, TED has created a program called TEDx. TEDx is a program of local, self-organized events that bring people together to share a TED-like experience. Our event is called TEDxChennai where x = independently organized TED event. At our TEDxChennai event, TED Talks, videos and live speakers will combine to spark deep discussion and connection in a small group. The TED Conference provides general guidance for the TEDx program, but individual TEDx events, including ours, are self-organized. You can get to know more about TED here.

Aditi Prasad, COO and CIO of Robotix Learning Solutions, is on a mission to inspire and educate young girls and boys to learn to code and develop real-world solutions for real-world challenges. Aditi is harnessing the power of robotics, coding, STEM & Maker Space to make school education more interactive and immersive. Robotix Learning Solutions aims to inspire and equip the next generation of innovators and creators. In 2014, under the aegis of Robotix, they next laid the groundwork for ‘Indian Girls Code’, a free, hands-on coding and robotics education programme for underprivileged girls. The first Indian Girls Code initiative was at an all girls orphanage Annai Ashram in Trichy, Tamil Nadu India, teaching 75 girls coding and robotics. In India, where technical degrees often lead to better jobs, Aditi is promoting educational pathways that lead to better careers and opportunities for girls. She is helping to make tech studies more approachable and fun, and creating girl game changers in STEM.

Anu Majumdar is the author of Auroville, a City for the Future and at present part of the city's town development council.

Dr. Shannon Olsson heads the Naturalist-Inspired Chemical Ecology (NICE) group at the National Centre for Biological Sciences (NCBS), Tata Institute of Fundamental Research in Bangalore. The NICE is particularly interested in how animals, and especially insects, identify objects across different environments. Their work traverses Himalayan meadows, ecologically sustainable agriculture in Coorg, and pollution in Bangalore - anywhere insects are important, which is nearly everywhere on Earth. A Fulbright Scholar and Ramanujan Fellow, Shannon's research strives to reach a deeper connection with nature that she calls empathic science. By putting ourselves in the world of some of our smallest, but most important inhabitants, we not only gain an understanding of our natural world and its preservation, but we understand ourselves.

Gitanjali is just 12 years and she was just recently named America’s Top Young Scientist of 2017 by the Discovery Education 3M Young Scientist Challenge with a device to detect lead in water faster than any other current techniques. She is a Davidson Young Scholar since 2012, and has received several scholarships and awards for achievements in science, arts and community service.

The performance took place right after the TEDx talk by Sriram Emani on 'When Classical Goes Viral'. Sriram spoke about the IndianRaga movement where the most talented musicians and dancers are handpicked to collaborate and produce videos that go viral across 65 countries to over 100 million audiences! In just a few years, more than 5000 artists have reimagined the classical arts in a modern-day context, showing how the grammar and essence of tradition can be retained while attracting new and young audiences. The genres that IndianRaga works with are rooted in Indian classical performing arts and include Carnatic music (South Indian classical music), Hindustani music (North Indian classical music), semi-classical music, contemporary and fusion music, Indian classical dances including Bharatanatyam, Kuchipudi, Odissi, Mohiniattam, Kathak, and also ballet, tap, contemporary dance. Their productions also include a wide range of instruments including mridangam, tabla, sitar, violin, flute/bansuri, veena, ghatam, and new-age categories like music arrangement and production with EDM, Trap, Pop amongst others. Their most popular innovations include classical cover songs, a cappella, mashups and remixes of the latest viral pop hits in both western and Indian music. Anyone can apply to join their collaborations, and you can visit www.indianraga.com for more details and application process.

Kiley is a Fulbright-Nehru research fellow whose work focuses on increasing access to holistic care for individuals with disabilities in rural communities. She has worked extensively in disability services across the US, England, and India with experience in special education, physical and occupational therapy, and adaptive recreation and sporting. Kiley’s passion outside of disability work is in athletics. She was a Division 1 soccer player for the University of Notre Dame and is a 4th degree Master-level black belt who fights for both the United States National and World Taekwondo Federations.

Marco Ferrario is the co-founder of mHS CITY LAB, a social venture that focuses on inclusive urban development and on how to improve the resilience of informal settlements by leveraging technology.

Prakash Iyer is a best-selling author, leadership coach and motivational speaker. Prakash spent three decades in the corporate world working with teams selling everything from soaps and colas to yellow pages and diapers. In his last role he was the Managing Director of Kimberly Clark Lever. Prakash is now an advisor to Multiples Private Equity Fund, an independent director on the board of Xerox India, and interestingly enough, he also served as the CEO of the Mumbai Indians cricket franchise in their IPL title- winning campaign in 2015. Passionate about cricket - and people - Prakash strongly believes there's a leader inside each of us, waiting to be unleashed! He draws on his experience from work - and the world around us - to share inspiring stories, practical advice and valuable life lessons.

Rakesh Raghunathan is a food raconteur, with an abiding interest in food history and practices, and their interaction with socio-cultural norms. His journeys as a food traveler have taken him to the nooks and corners of South India, to discover a vast repertoire of indigenous food. His travels are documented in the form of a television show hehosts on a regional channel. A prolific cook himself, Rakesh however loves the role of the interested observer, as he engages with communities, learning about the diverse ways in which they grow food, cook, eat, and live. His blog Puliyogare Travels is popular for its interesting recipes, as also the stories and legends behind them. Rakesh has also taken food to the realm of the performative. His cookery workshops are a sensory and aesthetic experience with an element of drama thrown in, as he breaks into song every now and then.

RS Prasanna is the Bollywood Filmmaker behind the commercially successful and critically acclaimed sleeper hit of 2017, Shubh Mangal Saavdhan. Tackled a taboo subject with humour and sensitivity and is on to his second Hindi film.

Listed by Forbes as one of Asia's most influential under 30 year olds, Samyak leads X Billion Labs - an ecosystem of impact enterprises. Through his unique ability to align different stakeholders such as governments, private sector & grassroots organizations, he is building future relevant businesses in areas such as employability, agriculture, population control, healthcare and rural development. Samyak is currently developing a skilling model to enable India's youth to remain professionally relevant in a digital economy (Skills Lab), an information access platform for rural Indian youth (Netpar - Tech Lab) and a behavior change model to positively influence people's choices (Action Lab). In the past, he has founded some of the country's pioneering youth platforms such as Operation Black Dot, The Indian International Model U.N, The Green Batti Project, Youthportal.in, UN Young Changemakers Conclave & Nimaya Foundation which have collectively engaged a million + young citizens. Through all his work, Samyak's core aim is to enhance the quality of life & raise the standard of living for India's next billion. Watch him talk LIVE at #TEDxChennai2018. Reserve your seats now.

Saumya Khandelwal is a Getty Images Instagram Grantee for her work ‘Child Brides of Shravasti’. With interest in gender issues and environment, Khandelwal works as a photojournalist with Thomson Reuters in New Delhi. Over the past five years she has built a diverse body of work that spans photojournalism and documentary genres of photography. Recipient of the National Foundation of India Award 2017, Khandelwal has been published globally in The New York Times, The Guardian, The Wall Street Journal, Bloomberg, Al Jazeera etc. She represents the small but growing clan of professional woman photographers in the country.

Sriram Emani runs the IndianRaga movement where the most talented musicians and dancers are handpicked to collaborate and produce videos that go viral across 65 countries to over 100 million audiences! In just a few years, more than 5000 artists have reimagined the classical arts in a modern-day context, showing how the grammar and essence of tradition can be retained while attracting new and young audiences. Sriram Emani is a Global Fellow with the International Society for the Performing Arts (ISPA). He is an alumnus of IIT Bombay and the MIT Sloan School of Management where he was 1 out of 5 students to be awarded the prestigious Siebel Scholarship for academic excellence and leadership. Sriram started the marketing and business development team at the National Center for the Performing Arts (NCPA) in Mumbai. Over the past few years, Sriram worked as a Strategy Fellow with the President of Lincoln Center, New York City, and with the President of Global Digital Business at Sony Music, New York City. Sriram represented USA at the global creative business conference in Copenhagen, Denmark, after IndianRaga won the US Creative Business Cup in 2012. Sriram was also recently invited to speak on Capitol Hill by the US Congressional Arts Caucus in a 'Spotlight on Arts Entrepreneurs' to discuss the impact of arts legislation and policy on the performing arts ecosystem in the United States. He won the 2015 Arts Entrepreneurship Award by Fractured Atlas in New York City.

Tishani Doshi publishes fiction, poetry, and essays. For fifteen years she worked as a dancer with the choreographer Chandralekha. Her most recent book is a collection of poems, Girls Are Coming Out of the Woods. She lives on a beach in Tamil Nadu.

Trishya Screwvala founded The Lighthouse Project with the aim of creating structured and accessible platforms for volunteering. She is also an active volunteer at New Acropolis, an international organisation dedicated to Philosophy, Culture and Volunteering. Trishya believes that service is not just a duty but an extraordinary opportunity, and is passionate about creating an environment conducive to volunteering, both within and outside of the social sector. The Lighthouse Project is one of India’s first mentoring programs which connects professionals and college students with children from under resourced communities through one-on-one mentoring, with the aim of developing their life skills, social skills and exposing them to a world beyond their community

Umesh Sachdev, the co-founder and CEO of Uniphore Software Systems Pvt Ltd, is a modern-day entrepreneur with patents in Speech Recognition Technologies. His Chennai-based startup is transforming the man-machine communications using the power of speech with AI and Machine Learning. 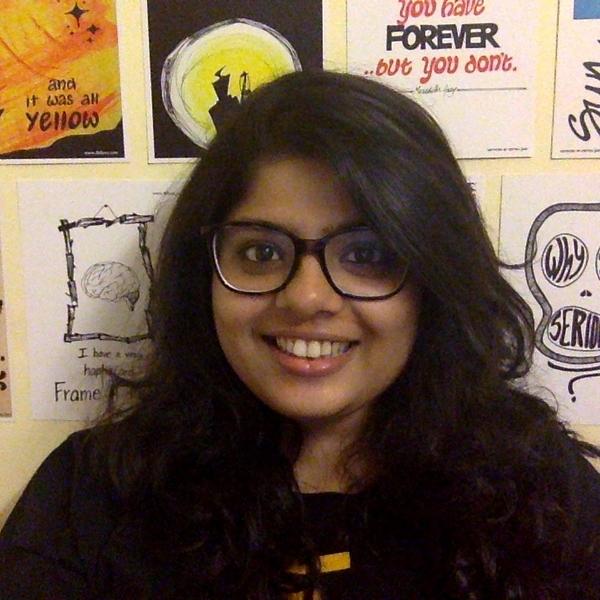