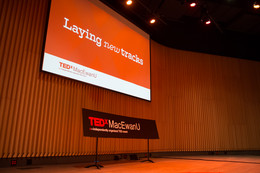 Laying New Tracks is about celebrating MacEwan’s innovations, the people behind them — and the impact contributions have made within MacEwan and in our community at large.

It’s about forward momentum and forward thinking—like revolutionizing education and the student experience by bringing novel research and innovative teaching into the classroom. Our collection of presenters includes faculty and students laying new tracks in a diverse range of expertise including innovative student business solutions to urban food security and the intersections of music/culture/video.

We also acknowledge the tracks that brought us to where we are now. We recognize that our university rests on traditional Treaty Six Land, and as we work towards Canada’s Truth and Reconciliation Commission Calls to Action, we recognize our responsibility to protect this land.

And, finally, our university is built upon the former site of the Canadian National Railway line. As this historic railway celebrates 100 years of its tracks physically connecting our nation, we hope to build on the idea of connecting people through inclusion and reconciliation.

Laying New Tracks is about where we have come from and where we are going — what we have learned and what we look forward to learning.

Adam Prince is a co-founder of StudentHire Corp., an Edmonton-based tech startup that provides financial and experiential opportunities to post-secondary students. He serves as chief of Business Development, with responsibility for sales and strategic partnerships. Until StudentHire is ready to pay his bills, Adam will continue to carve out a living via the ancient art form of door-to-door sales, where he finds satisfaction delivering value to customers in a straightforward, honest manner. In addition to his businesses activities, Adam is a (barely) full-time student at Macewan University, and a committed husband.

Anna Pienkowski is passionate about nature, science and the oceans, and first fell in love with Canada’s Arctic during her PhD studies. Since then she has studied the changing climate of the polar route that connects the Atlantic and Pacific oceans – the Northwest Passage. Although she started out in marine biology and oceanography for her undergraduate degree, Anna soon became fascinated by the power of reconstructing past environments from the climate archive that is the seabed. Having grown up in Poland and Austria, she is now an assistant professor in Earth and planetary sciences at MacEwan University.

You can most likely find Brandon Craig at the Alberta Children’s Hospital where he is studying clinical neurosciences through the University of Calgary to complete his Master of Science degree investigating various avenues of pediatric strokes. Brandon recently graduated from MacEwan University in June of 2017 where he obtained a Bachelor of Science degree majoring in Honours Psychology, and received the President’s Medal of Academic Success and Student Leadership. During his time at MacEwan University, he was a Student Representative on the Research Ethics Board, a MacEwan Ambassador, Vice-President of MacEwan Health Promotion, and a Family Liaison of the Intensive Care Unit at the Royal Alexandra Hospital. Additionally, Brandon participated in various research projects investigating the cognitive neuroscience of stroke and attention. As an avid hockey fan, Brandon also served as a statistical analyst and player development coordinator for the Edmonton Oilers of the National Hockey League for 2 seasons. He is known to appreciate the learning environment MacEwan University possesses and admires the faculty and students for molding him into the student he is today.

Dr. Deborah Saucier became the fifth president of MacEwan University on July 1, 2017. An accomplished academic and successful university administrator, she is deeply committed to diversity, equity and inclusion—and truly believes that education has the power to transform lives. Deborah is strongly committed to maintaining the university’s student focus, implementing the Truth and Reconciliation Commission’s Calls to Action, and exploring what it really means to be Edmonton’s downtown university. Deborah was previously the provost and vice-president, academic at the University of Ontario Institute of Technology (UOIT) in Oshawa, Ontario, where she was also the former dean of science. Before joining UOIT in 2011, she was the chair of the Department of Neuroscience at the University of Lethbridge and a Tier 2 Canada Research Chair in behavioural neuroscience, with a specialty in spatial cognition. Originally from Saskatoon, Deborah is a member of the Central Urban Métis Federation. She and her husband Chai Duncan, a curator and contemporary artist, have a nine-year-old daughter who is the light of their lives.

Kalen understands that sustainability is about more than recycling and saving the bees (although she really loves bees). It’s about finding a balance between ecological integrity, economic vitality, social equity and cultural continuity. As the Director of Sustainability at MacEwan University, Kalen sets and achieves admiral goals for the campus — but she sets equally admiral (lofty?) goals for herself. She’s an avid adventurer, a lifetime learner, and an advocate for healthy built (maybe lose built) environments that promote connectivity and well-being. Kalen likes to tackle global challenges through local action; connecting people to one another and the larger community. As a dynamic change leader, Kalen believes in status-quo disruption, encouraging everyone to explore innovative, interdisciplinary solutions.

With one eye on the future of education, the other on - innovation, entrepreneurship and technology, experiential education is the heart of Ms. Linaker’s work at MacEwan University. Driven by a passion unnamed, Launa utilizes the institution as a platform to live her purpose, enabling students to become the best versions of them self, by creating opportunities for their learning, and through mentoring and coaching students. Launa believes strongly in, by students for students, and provides faculty support for several student led clubs. Her lived experience as an entrepreneur and management consultant, and as a student for many years while raising a family and a business, gives her perspective on the influences of teaching and learning. She earned a MBA from the University of Alberta, an Executive Coaching Post Graduate Certificate from Royal Roads and will resume her PhD in Secondary Education, Fall 2018, at the University of Alberta. Ms. Linaker keeps her pulse on the innovation & entrepreneur world through her mentoring role with Venture Mentoring Services at the University of Alberta and is active in building the innovation and entrepreneurial culture within MacEwan University.

Dr. Leo Wong, PhD is the Founding Director of the Social Innovation Institute at MacEwan University and an Assistant Professor in the School of Business. Dr. Wong teaches and researches progressive business practices that are aligned with conscious consumerism, responsible advertising, socially and environmentally responsible thinking and ethical decision-making, while working with a generation of students who will shape our sustainable world. He has done applied research with social enterprises, taught undergraduate and graduate business courses related to sustainability and designed courses focused on corporate social responsibility. In the community, Leo has been involved with a number of initiatives including the United Nations Principles for Responsible Management, the United Nations Global Compact, has volunteered on the board for the International Association for Volunteer Effort and founded local organizations focused on youth empowerment and youth volunteerism.

Margaret Milner is a registered nurse and a faculty member and chair of the Bachelor of Science in Nursing program at MacEwan University. She teaches with a passion for social justice, political activism and sustainability. As a mother and grandmother, activist and lover of nature, securing a safe place for all life forms to thrive is a primary motivation for her life's work.

Michael B. MacDonald is a filmmaker, ethnomusicologist and associate professor of music in the Faculty of Fine Arts and Communications at MacEwan University. His research focuses on youth and community studies, ethnographic film, and the critical pedagogy of music. He has published two books: Playing for Change: Music Festivals as Community Learning and Development and Remix and Life Hack in Hip Hop: Towards a Critical Pedagogy of Music. Michael is the director of FreireProject.org, and his films are freely available at MichaelBMacdonaldFilms.ca

Mike Perschon is an assistant professor in the department of English at MacEwan University. In addition to writing and speaking about science fiction, fantasy and horror literature from around the world, Mike is an avid fan of tabletop roleplaying games. He's regularly told all of these things are a waste of time, but is fascinated by why our culture spends so much money on these supposedly pointless imaginary worlds.

Richard Clark is co-founder/CEO of StudentHire Corp., a company that is revolutionizing how students self-fund their education. Richard has always had a passion for business: the summer after his first year of university, he started a landscaping company that generated six figures in revenue in its first year. The summer before that, he worked as a door-to-door security salesperson and finished the season in the top five per cent of rookie salespeople in Canada. Richard is also a husband and new father.