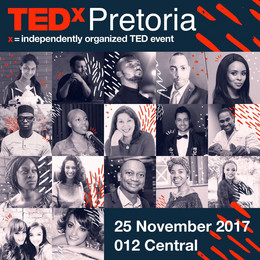 The mind-shifting short-talk phenomenon returns to Pretoria in November for a day of disruptive ideas and bold new voices challenging a business-savvy audience to reboot their thoughts and actions to meet the needs of the future.

The theme for this year’s event is "UNAPOLOGETIC"

This will be Pretoria's fifth TEDxPretoria - a localised offshoot of the hugely popular Technology, Education and Design (TED) series of talks which has become an international movement under the banner of "Ideas worth spreading". The talks, which are freely available online, are widely recognised as one of the world's most inspiring sources of fresh thinking on a wide range of cultural and scientific subjects.

TEDxPretoria 2017 takes place on 25 November 2017 at 012 Central, our new home. A funky-fresh upcoming space which inspires creativity and open-mindedness.

Like all TED talks, the TEDxPretoria event is open-source and not for material or political gain. It is organised under a free license by an independent team of professionals, graduates and students who share a burning desire to challenge accepted wisdom and spark deep conversations and connections in their communities.

Adebayo is a human rights lawyer with vast experience working for African and international organizations including SERAC, Global Rights, Commonwealth Human Rights Initiative, and Global Integrity, amongst others. He currently works as Advocacy Coordinator for the Centre for Human Rights based in Pretoria, South Africa and is a research fellow with the Center for Human Rights Science, Pittsburgh USA. As a lawyer, he has extensively used images and videos to bring attention to human rights concerns and social justice issues with some of his work earning him regional and international awards and recognition. In 2013, Adebayo started an organization called White Code Centre, which uses audio- visuals to reshape how human rights are perceived. He is presently undergoing his Ph.D at the University of Pretoria with a focus on international criminal accountability using citizen media. His use of technology in advancing human rights allowed him be a visiting academic at the Human Rights Center, University of California, Berkeley. He is also part of the global team working with Amnesty International on its open source investigation project called the Digital Verification Corps (DVC). Adebayo continues to create riveting visuals because he believes in their ability to challenge stereotypes and change status quo.

Busisiwe Mahlangu is a writer, performer and language activist born in Mamelodi, Pretoria (South Africa). She is currently studying for a BA in Creative Writing at the University of South Africa (UNISA) majoring in African Languages and Linguistics.

Dr. Habib Noorbhai (Mr. South Africa 2017) is a researcher in Sports Science, a presenter, speaker and humanitarian. He completed a B.A in Sport Psychology (UJ), Honours in Biokinetics (UKZN), M.Phil in Biokinetics (UCT) and a Ph.D in Exercise Science (UCT). In 2013, he was among South Africa’s top 100 brightest young minds and in 2015, he was nominated among Mail and Guardian’s top 200 young South Africans. He was also included in Fast Company South Africa’s Top 30 creative people in business for 2017.

Founder and President of CliffCentral.com, host of “The Gareth Cliff Show” and former South African Idols judge; Gareth Cliff is one of South African radio's most prominent personalities. Gareth took a major leap into entrepreneurship on 1st May 2014 from traditional terrestrial radio to the future of internet and mobile with the aim of creating the pre-eminent “infotainment” online content hub. In three years, it has made significant progress becoming the biggest podcaster in Africa. Beyond the public eye, Gareth has demonstrated his commitment to his audience and passion about South Africa by generously giving of his time to causes that are close to his heart.

She might just be 17-years-old, but Kiara Nirghin has the world at her feet with her forward-thinking and game-changer innovation. She won Google's Community Impact Award for creating a super absorbent polymer capable of storing reserves of water, which could essentially combat drought. Kiara was born in Johannesburg, South Africa and hopes to encourage other young scientists to similarly, make an impact on the world around them.

Kurt Schröder is a South African story teller, spoken word artist and business enthusiast. A Pretoria boy, Kurt has also lived and studied in France and China, while traveling extensively in between. Kurt's poems and stories are inspired by his lived experiences, and are reflections on his wrestling with topics such as faith, hope, love, God, and humanity.

Kwandile Sikhosana is the founder of the Daveyton Book Club which has established 12 libraries and book clubs across the Country and working on establishing a University and the project is worth 6 billion rand and has passed its feasibility stage. Kwandile has represented South Africa at the AU Youth Parliament, British Parliament and the Youth To Youth Summit in Dubai.

In an era ruled by the Taylor Swift’s of this world, Lerisa Strydom is unashamed to be classical. This is not your “...red lip, classic, thing that you like,” but rather a ballgown wearing, high notes singing, type of classic.

Nastassia Arendse is the host of ‘The SAfm Market Update with Moneyweb’ and she writes for the African Independent Newspaper focusing on business and economic issues across the African continent. She also hosts ‘Change Your Game’, an entrepreneurship show at the South African Broadcasting Corporation (SABC). Having debuted on radio as a traffic reporter for YFM (99.2 FM), Nastassia has been in broadcasting for 7 years, and has worked in both television and radio. As a television anchor, she presented Closing Bell East Africa and Open Exchange on CNBC Africa. In 2015, she hosted a show called Africa’s visionaries for SkyTV, which aired in the UK on channel 412.

Nkateko Masinga is a medical student, poet, author, publisher and theatre actress from Pretoria. Her poetry is published in U.S journal Illuminations and is forthcoming in UK pamphlet press Pyramid Editions in 2018. She is published in Malawi's Nthanda Review, Nigeria's Ake Review, the University of Edinburgh's Dangerous Women Project and is profiled in South African journals Poetry Potion, Any Body Zine, Ja. Magazine and Guillotine Magazine. In 2015, her work was shortlisted for the ‘Respond’ Human Rights Poetry Award 2015/2016, organized by the United Human Rights Student Network. In 2017 she was a finalist for the 4th Crystal Ruth Bell Residency in Beijing, China. She is a member of the Golden Key International Honour Society for outstanding academic achievements. Nkateko is the director of NSUKU Publishing Consultancy, a company she started to assist aspiring writers to get their work published. She has also written and published three poetry collections of her own. In August 2017, she founded Pass The Mic, a platform for women in the arts to produce work telling their stories on their own terms. She has performed in two theatre productions: 'Beautiful Scary Things' (Joburg Theatre, May 2016) and 'Deceived' (SA State Theatre, September 2017)

Shaakira is a Professional Architect and Urbanist who uses her qualifications and experience to bring excellence in design back to city and local government projects. Through her work, she has changed the way the City interacts and engages with its communities. By introducing new participatory processes and co-producing solutions with the communities that she works in, she has committed her work toward bringing City and Citizen planning together. Shaakira is passionate about responsive and co-productive design. She has led the transformation of the City’s approach to design and the manner in which it services its citizens. She has introduced new practices to ensure that communities are empowered through their direct contribution and participation in their spaces. This allows for the design to be a reflection of the social environment within which it is situated.

Shakes Motsilili has an Investments Administration background and worked for Momentum Wealth as Head of Actuarial Support for a number of years. He resigned in 2012 to become an Entrepreneur with a vision to electrify the whole of Africa. He believes that access to electricity is intrinsic to dealing with inequality that exists in society. He has been active in the energy sector over the past 6 (six) years, and has been particularly interested in finding ways for the private sector to fund high risk startups. His is mainly focused in South Africa and neighbouring countries initially, with an outlook to later expand to the rest of the continent.

Sindi Buthelezi is a seasoned traveller, creative entrepreneur and self-taught photographer based in Arcadia, Pretoria. She’s backpacked and travelled 10 African countries including Egypt, Kenya, Mozambique, Tanzania and more. This former IT Specialist is passionate about travel, the arts and the field of Anthropology. During her travels in Tanzania she met a gentleman by the name of Anyitike who introduced her to the art of screen-printing which then saw her birthing AzaniaZulu, a youthful, urban & multifunctional clothing brand born out of passion and love for the African continent. She believes her life's mission is to help rebuild Africa; with hard work & prayer she believes she can achieve this. Some of her travels are documented on www.azaniazulu.com/travel and through her forthcoming travel memoir.

Thembiso is a Social Activist who has been championing girl-child rights since she was 13 years old. She runs a non-profit company called Social Coding that teaches young girls in disadvantaged areas, digital entrepreneurship through computer programming. Her workshops teach girls between the ages of 8 and 20 how to build sustainable businesses by creating products such as mobile applications or websites that directly solve problems they have identified in their communities. 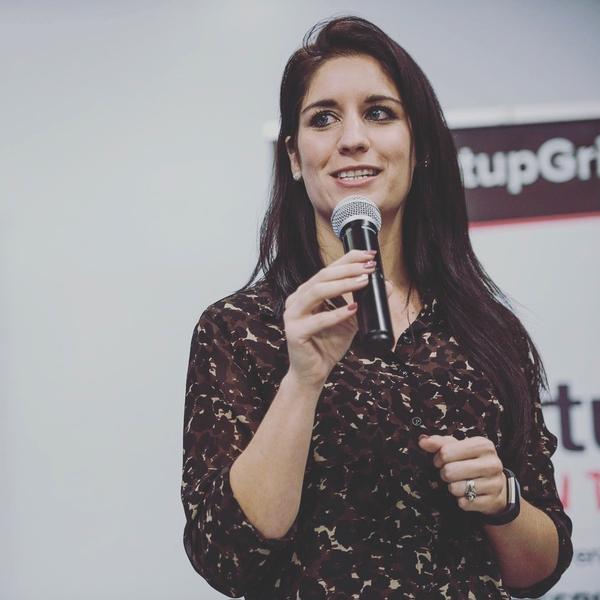