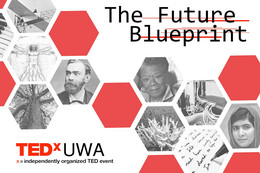 BLUEPRINT (/ˈbluːprɪnt) - noun
1. a detailed program of action that describes how something might be achieved; 2. an early-stage design plan

TEDxUWA 2017 will showcase a pioneering squad of speakers and performers, who will spread their cutting-edge ideas to be added to the #TEDxUWABlueprint for a better future.

From Cyber Security to Coral Bleaching and so much more...join us for a day of entertainment, excitement and enlightenment!

Adam Inder is an alumnus of the Teach For Australia “Leadership Development Program”, which places high-achieving university graduates into socioeconomically disadvantaged schools to gain their teaching qualification through workplace experience and intensive study over two years. Following his two year placement at Balga Senior High School (Perth’s most disadvantaged metropolitan school), he gained a role as Head of Mathematics & Science at Clarkson Community High School, another disadvantaged school in the northwest of Perth. Adam is passionate about using education research to drive systemic improvement in schools, indicated by his publications in national papers: Education Today and Australian Educational Leader. Adam is also a UWA Alumni, graduating in 2013 with a Bachelor of Science in Engineering Science and Chemistry.

Allison is the co-owner and director of Flora & Fauna, the hugely popular plant-based café in Northbridge, Perth. She is from a small town in Northern Ontario, Canada and has called Perth “home” for the last five years. After daydreaming about opening a café for quite some time, she and her business partner started Flora and Fauna in 2014. Allison draws inspiration from family recipes and much-adored creations from her travels. She is passionate about making flavourful, healthy food that is presented in a playful, joyful manner. She believes in “eating with your eyes first” and strives to produce vegan and vegetarian meals that look like little works of art. She is very enthusiastic about eating vegetables, drinking tea, cats, running, equality, playing outside, travelling, and trying not to kill her plants.

Conor McLaughlin is a second-year student at UWA, studying Management and Economics. He is very passionate about the power of mentoring in creating positive social change. At the end of last year, he started researching what the future workplace will look like, and how we will all be affected by these disruptions from technology and artificial intelligence. What surprised him, though, was the lack of action being taken to prepare for these changes and, through his projects and initiatives, Conor hopes to raise awareness about this issue and show people of all ages how they can best prepare for this large-scale change we are about to experience. Specifically, he has established a not for profit organisation, Agents of Change, which informs young people about enterprise skills by interviewing change-makers in the community. Conor has also co-founded a web app, Futuristic Skills, which teaches high school students the most important employment skills for the future of work.

Dr Danuta Sampson is a Research Associate at the Lions Eye Institute and an Honorary Research Fellow at the University of Western Australia, with expertise in optics, optical microscopy, and image processing. She acquired this expertise during her PhD at the Nicolaus Copernicus University in Torun, Poland, in the Optical Biomedical Imaging Group. Her research focuses on developing hardware and software methodologies for visualization, assessment and correlation of subtle changes in the structure and function of the human retina. Beyond research, she has been involved in many outreach programs aimed at raising general public interest in optics and science. Recently, she has been selected an ambassador of The Optical Society (OSA); OSA is the world-leading professional society in optics and photonics. This lifetime distinction recognizes OSA young professionals for their continuing efforts to serve the wider optics and photonics community.

Georgia is investigating work design as a PhD candidate in the Centre for Transformative Work Design at the University of Western Australia Business School. Working collaboratively with colleagues at the CTWD and beyond, her involvement in projects currently includes: improving the design of operating theatre teams in a cutting-edge public hospital; building a sustainable teamwork model for clinicians diagnosing patients with chronically undiagnosed rare genetic diseases; and investigating the re-design of work in the university context. In her spare time, Georgia leads the support team for the young entrepreneurs at Bloom, teaches Psychological First Aid to Australian Red Cross volunteers, and is a 2017 Resilience Ambassador for the Australian Institute of Disaster Resilience.

Michael is the Deputy and Science Director of CSIRO Agriculture & Food. He grew up in New Zealand where he studied agricultural science, followed by a PhD at The University of Queensland - UQ focusing on the tropical grain crop, sorghum. Michael’s research background is in crop agronomy and simulation modelling where his work has aimed to analyse and understand broad-acre farming systems to inform better management regimes. He has worked on agricultural systems in the tropics, subtropics and temperate zone on a wide range of crops and pastures. As part of his current role, Michael is leading an initiative in ‘digital agriculture’ that aims to bring together agricultural researchers and information and communication technology experts in CSIRO to explore new ways in which digital technologies can improve the way research is conducted and results are delivered to end users.

Sven is the Chief Executive Officer of Diamond Cyber Security, a boutique cyber security firm based in Perth and Adelaide. He is a veteran having served 17 and a half years in the Army, with over 9 years in the Special Forces. Sven’s career culminated as the Commanding Officer of the 126th (Commando) Signals Squadron within 2nd Commando Regiment. He has deployed to Afghanistan, Iraq, Solomon Islands, Lebanon and Syria. Upon leaving the Army Sven founded Diamond Cyber alongside Michael Malone, the founder of iiNet and Ian McFarlane, founder of Ajilon. Sven serves as both the CEO and Defensive Cyber Principal of DCS.

Tui is a UWA Alumni and Aboriginal cultural advisor. Educated with part-time studies in the school of hard knocks, her list of work experience can be described as a "Jack of all trades" which includes: administrative investigator, observational evidence gatherer, project officer, Indigenous policymaker, artist, carpenter and cocktail maker. She is also a linguist-in-training and although she is a frustrated linguaphile who speaks only one language fluently, she has a passion for all languages and keeping home languages alive. As the former Indigenous Literacy Officer at the State Library of Western Australia, she was involved in an early year’s English literacy program for remote West Australian communities. She has also advocated for home language usage.

Verena is originally from Austria where she obtained a Bachelor’s and Master’s degree from the University of Innsbruck. She then completed her PhD at The Ohio State University in the U.S. In 2013, Verena joined the ARC Centre of Excellence for Coral Reef Studies at the University of Western Australia, and recently became one of the Research Program Leaders in the Centre. Her current research aims to provide insights into the mechanisms that enable climate change resilience in reef-building corals. Verena has won several awards including the Presidential Fellowship of The Ohio State University and the Gretchen L. Blechschmidt Award of the Geological Society of America. She has published articles in journals such as Nature and Global Change Biology, and her work has been featured on many radio stations, websites and newspapers including The Age and Australian Geographic. In 2016, she was featured in the documentary “Verena Schoepf – Super Corals”.

Wes is a Canadian cancer researcher working on developing new therapies and cancer treatments. He had the opportunity to work and study around the globe in 5 countries. His previous work has led to the understanding of gene expression changes as cancer progresses in brain tumours, the discovery of new pathways involved in the tumorigenesis of breast cancer, and development of new strategies in radiotherapy treatment. He also has a long history in the technology sector and serves as CTO of two medical technology companies in North America. He has received engineering and innovation awards for his work in health tech from Waterloo, Massachusetts Institute of Technology (MIT), Microsoft, and Intel. He continues to work on machine learning algorithms to produce new tools for the future of medicine. Wes currently lives in Perth, Western Australia, where he works at The University of Western Australia and Harry Perkins Institute of Medical Research.