K. P. B. Hinduja College of Commerce brings back the TEDx stage for its annual edition - TEDxHindujaCollege scheduled on 23rd September, 2017. A non-profit-making event, it aims at bringing inspirational stories and ideas from local community on a global platform. Through our extensive social media reach, 8Million+ subscribers on YouTube to be precise , we look to inspire every individual and change their lives in the littlest of ways.
We invite you to come and join us in making the world a better place.

Born and brought up in Lucknow, Aahana Kumra had always been a day dreamer but had never imagined she will grow up to be an actor. Moving to Mumbai changed her life. It gave her immense opportunities to share stage with the likes of Naseeruddin Shah and Ratna Pathak Shah , screen space with Amitabh Bachchan and recently has been a part of the sleeper hit of 2017 Lipstick Under My Burkha. Life for her has just begun as she juggles between films, TV, web and theatre.

He is an award winning filmmaker, playwright,director and activist from the Chhara denotified tribes of Ahmedabad in the western part of India. He is a recipient of Fort Foundation international fellowship. Currently, working at the Bhudan theater( a community theater group of Chhara denotified tribe of Gujarat) as a director.

An innovator, an entrepreneur, and a teacher and mentor to innovators and entrepreneurs, David’s career spans more than 40 years. Currently professor of Entrepreneurial Innovation at the Indian School of Management and Entrepreneurship, David specializes in Design Thinking. A highly-rated speaker, he has lectured on innovation, marketing, strategy, entrepreneurship and salesmanship, as well as teaching business at Stratford University, FOSTIIMA Business School and Sunstone Business School. He resides in Mumbai.

From an investment banker to a travel blogger, Dhruv Dholakia has come a long way. This Mumbai-based blogger quit his corporate job to ride solo across India, with an aim to travel to 29 States in 16 months. Dhruv Dholakia’s quest to travel the length and breadth of the country, steering away from his monotonous life to find profound wisdom and explore the beauty of India.

Dr. Kanan offers various individuals or group trainings in Problem solving to strategic thinking, Time management, Goals achievement, Leadership development and executives. Dr. Kanan has worked with Business Houses, IT Companies, Management Students and Trainees, helping them as a life coach, to grow their business, clear their mind and balancing their lives.

Neeta Kolhatkar is a senior journalist with over 20 years experience reporting on various sectors and issues. She has also completed certified course in International peace and Conflict resolution.

Nisha Thakkar, a yoga trainer, could practice yoga even when the lights went off and perform her yogabhyas in complete darkness. This experience gave a new dimension to her life. She now teaches yoga to blind children and have given them a new ray of hope.It is a mesmerizing sight to witness her students perform on stage.

SHE WAS MORE INTRIGUED OF HER MOTHER’S SAREE THAN HER FATHER’S TROUSERS. Breaking all the stereotypes and sensitising people about the Trans community , meet Nitasha Biswas ,who hails from Kolkata, and was named the first Miss Transqueen India, first ever kind of the beauty pageant in the history of India. As a Trans-model and stylist , Nitasha has paved her journey in this industry as smoothly as possible because of her hard work and never let go attitude towards any situation. Her mother being her idol, Nitasha never looked back as she considers herself reincarnation of her mother and wants to fulfill her mother’s dream by opening an orphanage shelter.

Prathamesh is a the core committee member of Jagadamb Seva Bhavi Sanstha looking after the administration and outreach of the organization, a professional dhol-tasha player since the last 4 years, he believes he still has to learn alot. On a personal front, he is a post-graduate in marketing management and currently is a marketing professional working with a London-based Multinational Company.

Raghav Meattle is a singer-songwriter and was the semifinalist of second season of The Stage, India's only English reality show airing on Colors Infinity (Viacom18). With a lot of emphasis on lyrics and melody, 'simple and catchy' would be the best way to describe his music. His latest lyric video got over 50,000 hits on social media. Raghav was recently featured on a campaign with Nike and opened the show for Madhu Jain at the Amazon India Fashion Week, New Delhi. He was the vocalist of a Delhi-based Progressive Rock band, which was featured as one of 'Five Bands To Watch Out For' by Rolling Stone India.

Truptraj Pandya is the Guiness World Record holder for being the youngest tabla player. When he was just 3 years old he performed live at All India Radio, so far has given 150+ public performances at various events and he is just 10 years old. Recently, he acted in a movie called Bands of Maharaja and he is all set to entertain you all with his amazing rythm and tone. Be there to witness a revolution.

Born in Wasseypur, Zeishan Quadri is an Indian writer, actor, director and producer. He is known for writing the story of Gangs of Wasseypur and also for acting in it. Famous for being into crime genre, he has also directed and produced the film Meeruthiya Gangsters. 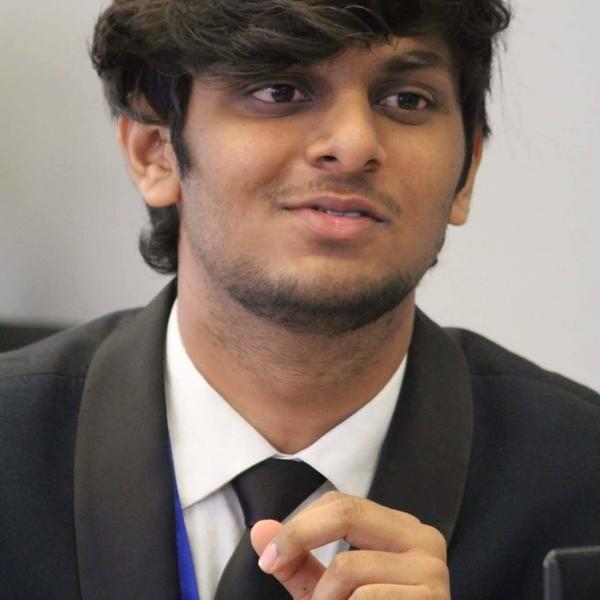