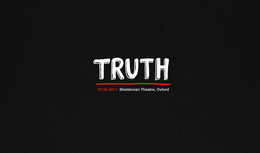 Post-truth. Fake news. Alternative facts. The very definition of truth seems to be up for grabs, and our relationship with truth is in a state of flux. New technologies have radically decentralised the means of producing and distributing information. Data, facts and figures filter through narratives that tap into our emotions and personal beliefs. Given this dynamic, how can we promote critical thinking whilst also cultivating empathy? The power of a story well told has never been greater, and reality is subject to interpretation and manipulation. Truth, though, isn’t completely mutable. The quest to uncover truth is a bedrock of human history, and some truths are enduring and undeniable.

On Friday 7th April, let’s meet at the Sheldonian Theatre in Oxford for TEDxSkoll. Under a 17th century ceiling, we’ll take stock of the concept of truth and its evolving role in social, economic and political progress. We will hear from those who have harnessed truth as a central driving force in their life and work, and those who have dedicated their life’s work to producing fiction. Together, we’ll explore truth as a concept that is not always easy to find, define or grasp, and we’ll embrace that challenge as a unifying—and uniquely human—element.

White Helmets are making history. Learn from Gardenia, one of the growing number of females in the White Helmets, how women in the war are making a difference, and how the group is going beyond saving people from the rubble to rebuilding infrastructure—and trust—in Syria.

Benjamin Grant founded and runs Daily Overview - an artistic, environmental, and educational project that uses satellite photography to detail how human activity has shaped the landscape of the planet. To date his images have been featured in more than 45 countries around the world, both online and in major publications such as The New York Times, The Guardian, and WIRED. The project’s following across social media currently exceeds an audience of 650,000. Prints of his images have been displayed in New York City, Los Angeles, San Francisco, Munich, and Paris. In 2016, Penguin Random House published his large-format book with a collection of images from the project, which has now been translated into seven languages. Benjamin graduated from Yale University, where he studied world history, art history, and rowed on the heavyweight crew team. He currently lives in New York City.

Carne Ross is a radical writer and thinker about world affairs who leads Independent Diplomat (ID), an innovative non-profit service that helps democratic governments and political groups use diplomacy to achieve justice. Their clients include the democratic Syrian opposition and the Marshall Islands which, with ID's help, led a large coalition of countries to achieve a stronger UN climate agreement in Paris. Carne is a former senior British diplomat who resigned over the 2003 Iraq war. Having worked on Iraq/WMD for the UK for many years at the UN, the publication of his hitherto-secret testimony about the government's lies helped create pressure for a full public inquiry into the war. Today, he writes and speaks about diplomacy and new forms of political action and democracy, in particular anarchism. He is the subject of a new feature documentary film Accidental Anarchist about his conversion from believer in government to anarchist, which will shortly be released globally.

Dr. Deborah E. Lipstadt is Dorot Professor of Modern Jewish & Holocaust Studies at Emory University in Atlanta. Her most recent book, Holocaust: An American Understanding (Rutgers, 2016) explores how America has understood and interpreted the Holocaust since 1945. Her previous book, The Eichmann Trial (Schocken/Nextbook 2011) published in commemoration of the 50th anniversary of the Eichmann trial, was called by Publisher’s Weekly, “a penetrating and authoritative dissection of a landmark case and its after effects.” She has held and currently holds a Presidential appointment to the United States Holocaust Memorial Council (from Presidents Clinton and Obama) and was asked by President George W. Bush to represent the White House at the 60th anniversary of the liberation of Auschwitz. At the US Holocaust Museum Lipstadt chairs the Committee on Antisemitism & State Sponsored Holocaust Denial. She is currently writing a book, The Antisemitic Delusion: Letters to a Student, pub 2018.

Jane McGonigal, PhD is a world-renowned designer of alternate reality games — or, games that are designed to improve real lives and solve real problems. She believes game designers are on a humanitarian mission — and her #1 goal in life is to see a game developer win a Nobel Peace Prize. She is the two-time New York Times bestselling author of Reality is Broken: Why Games Make Us Better and How They Can Change the World and SuperBetter: The Power of Living Gamefully. She is the inventor of SuperBetter, a game that has helped nearly one million players tackle real-life health challenges such as depression, anxiety, chronic pain, and traumatic brain injury. She has created and deployed award-winning games, sports and secret missions in more than 30 countries on six continents. She specialises in games that challenge players to tackle real-world problems, such as poverty, hunger and climate change, through planetary-scale collaboration.

Femi Nylander is an actor, musician, poet and activist. Born in the UK but with Nigerian heritage, he has spoken at universities around the country, appeared on the BBC's The Big Questions and written for a variety of publications; from The-Platform to The Guardian. His poetry is eclectic, covering a range of topics including the environment, the legacy of colonialism and the nature of the universe.

Jay Van Bavel is an Associate Professor of Psychology at New York University, an affiliate at the Stern School of Business in Management and Organizations, and a Visiting Scholar at the Russell Sage Foundation. Jay completed his PhD at the University of Toronto. He conducts award-winning research on how collective concerns—group identities, moral values, and political beliefs—shape the brain and behavior. This work covers issues of group identity, moral judgment and decision-making, social motivation, cooperation, implicit bias, and group regulation. In addition to publishing over fifty scientific papers, Jay has written about his research for the public in the Harvard Business Review, The New York Times, Wall Street Journal, and Scientific American. His research has been cited in the US Supreme Court and received international media attention, including Newsweek, TIME, The New Yorker, The Daily Telegraph, CBC News, Women’s Health, WNYC, The Guardian, and Salon.

Professor Agnes Binagwaho, MD, M(Ped), PhD is a Rwandan pediatrician who completed her MD in General Medicine at the Universite Libre de Bruxelles and her MA in Pediatrics at the Universite de Bretagne Occidentale. She returned to Rwanda in 1996. She was awarded an Honorary Doctorate of Science from Dartmouth College and earned a Doctorate of Philosophy from the University of Rwanda College of Business and Economics, with her PhD Dissertation entitled Children’s Right to Health in the Context of the HIV Epidemic. From 2002-2016 she served the Rwandan Health Sector in high-level government positions, first as the Executive Secretary of Rwanda's National AIDS Control Commission, then as Permanent Secretary of the Ministry of Health, and then during 5 years as the Minister of Health. As a Professor and Senior Lecturer, Agnes lectures at a number of prestigious universities and has held an array of leadership and advisory positions on national and international scale.

Named one of 15 Faith Leaders to Watch by the Center for American Progress, Rev. Jennifer Bailey is the Founding Executive Director of the Faith Matters Network, a new interfaith community equipping emerging faith leaders to challenge structural inequality in communities throughout the American South by imagining a new moral horizon. Rev. Bailey comes to this work with nearly a decade of experience at nonprofits, combatting intergenerational poverty. An Ashoka Fellow, Nathan Cummings Foundation Fellow, and Truman Scholar, Rev. Bailey earned degrees from Tufts University and Vanderbilt University Divinity School where she was awarded the Wilbur F. Tillett Prize for accomplishments in the study of theology. She writes for a number of publications including On Being, Sojourners and The Huffington Post. Rev Bailey is currently working on her first book and she is an ordained itinerant elder in the African Methodist Episcopal Church, the oldest historically black denomination in the US

award-winning writer, a filmmaker, and a medical doctor

Uzodinma Iweala is the CEO, Editor-In-Chief and co-Founder of Ventures Africa Magazine, a publication that covers the evolving business, policy, culture and innovation spaces on the continent of Africa. Uzodinma was a Radcliffe Fellow at Harvard University, where he worked on a novel about Washington, D.C. entitled Speak No Evil. His first novel, Beasts of No Nation, was released in 2005 to critical acclaim, and won numerous awards. Beasts of No Nation was translated into 14 languages and selected as a New York Times Notable Book. It has been adapted as a major motion picture starring Idris Elba. His second book, Our Kind of People, a non-fiction account of HIV/AIDS in Nigeria, was released in 2012 in the United States and United Kingdom. He is the producer of the short documentary Waiting for Hassana which premiered at Sundance Film Festival in Jan, 2017. He has published numerous short stories, articles, and essays in addition to appearing as a guest on international news shows.

WITNESS, is a global network of activists that helps anyone anywhere use the power of video and technology to protect and defend human rights. She believes in the potential of citizen media to level the playing field for marginalized communities and tell stories of truth that contradict the self-serving narratives of the powerful. With millions of people as potential civic witnesses, video can be an important source of data about violations, disprove false narratives, be used as evidence, or expose patterns of exclusion. WITNESS works in collaboration with activists and ordinary citizens creating tools, strategies and solutions to bolster the credibility of alternative voices, support the strategic use of civic media to create concrete change, and make it possible millions to be safe, ethical, and effective witnesses for human rights. Yvette is a human rights activists with a truth obsession and a ‘strategists’ who works to build effective witnesses for human rights.